Exclusive: Trevor Reed thanks American press for bringing awareness to his imprisonment in Russia 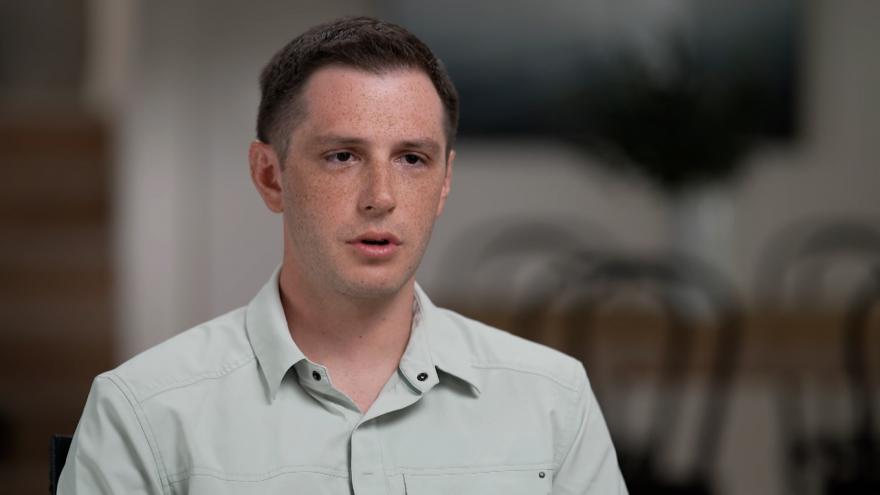 Editor's note: You can watch Jake Tapper's exclusive interview with Trevor Reed in a CNN Special Report: "Finally Home: The Trevor Reed Interview," on CNN and CNN International on Sunday, May 22, at 8 p.m. ET.

(CNN) -- In an exclusive interview with CNN, Trevor Reed, an American citizen recently freed after more than two years imprisoned in Russia, thanked the press for covering his detention and credited the reporting for helping secure his return to the United States.

"I mean, it's just there's countless people that that I need to thank. I'm not going to be able to cover all of them. But another big one that I need to thank is US news media for covering this," Reed told Jake Tapper in a newly released clip from the upcoming CNN Special Report: "Finally Home: The Trevor Reed Interview," which airs Sunday night.

Reed said in the clip, which aired on CNN's "Reliable Sources" on Sunday, that his release last month "would have never happened" if the American press did not cover and bring public awareness to his imprisonment.

"In (the) US, news media played a critical role in in accomplishing all of that. So, CNN, ABC, Fox News -- everyone who covered that -- I want to thank them for doing that," he continued. "And I want to say, keep up the good work and continue to do that with other hostages. ... That's something, unfortunately, that our government needs to function."

Reed, a former US Marine, was sentenced to nine years in prison in July 2020 after being accused of endangering the "life and health" of Russian police officers in an altercation the previous year. He and his family have denied the charges against him.

As part of a prisoner exchange with the US for Konstantin Yaroshenko, a Russian smuggler convicted of conspiring to import cocaine, Reed was freed from Russia in April. The US commuted Yaroshenko's sentence.

Throughout much of Reed's detention, his parents, Joey and Paula Reed, appeared before the press advocating their son's return.

Behind the scenes, officials both inside and outside the US government had for years been working to get Reed released. Last month's swap, one administration official told CNN, was the culmination of "months and months of hard careful work across the US government" that took place against the backdrop of growing tensions between Washington and Moscow -- exacerbated dramatically by Russia's brutal war in Ukraine.

It was the combination of factors around Reed's case -- including his deteriorating health in prison, his family's consistent activism, which led to a meeting with President Joe Biden, and the situation in Ukraine -- that led Biden to authorize the swap for Yaroshenko, a source told CNN last month.

In another documentary clip released earlier Sunday on CNN's "State of the Union," Reed said he does not believe the US participation in prisoner swaps to bring Americans home should be controversial.

While some critics say the US' participation in the swaps could incentivize foreign governments to hold Americans hostage or prisoners under false charges as a form of leverage, Reed told CNN's Tapper that he doesn't buy their argument.

"The thing that you have to understand is countries like North Korea -- Russia now, obviously, China, Syria, Iran, Venezuela-- countries like that are going to take Americans hostage no matter what," Reed said. "And even if they don't receive some type of exchange for those prisoners, they will do that anyway just out of pure malice just to show the United States that, 'We took your citizens.'"

Reed told Tapper in the clip that he believes these nations are "going to continue to do that as long as American citizens travel there."

Reed argued that what sets the US apart from other nations is its willingness to bring Americans home when they're being held hostage or are wrongfully imprisoned abroad.

"The United States went out and made the ethical decision to exchange prisoners to get their innocent Americans out of that country, even while exchanging them for someone who's more high-profile and valuable in the United States," Reed said, later adding that "the Russians, the Chinese, Venezuelans, Iran, Syria, North Korea -- none of them ever in their whole history have or ever would make an exchange for a prisoner who is just an average one of their citizens. They would never do that. And that's what sets the United States apart."

A senior administration official told CNN last month that they do not necessarily see Reed's successful repatriation as translating to momentum for Whelan's and Griner's cases but said the US government will continue to press for their release, and the channel for potential swaps will remain open.

According to a senior State Department official, the top US diplomat relayed that Griner's release is a top priority for the department and has his full attention.

In previously released clips of Sunday night's documentary, Reed recalled his time at a psychiatric facility for prisoners and discussed his mindset during his time behind bars.

Reed told Tapper he believed he was sent to the psychiatric treatment facility as a punishment for his continued push to appeal his conviction.

He described the facility: "There was blood all over the wall there -- where prisoners had killed themselves, or killed other prisoners, or attempted to do that."

"The toilet's just a hole in the floor. And there's, you know, crap everywhere, all over the floor, on the walls. There's people in there also that walk around that look like zombies," he continued.

Reed said he did not sleep for a couple of days out of fear of what the people in his cell might do to him.

In another clip released on Friday, Reed said he denied himself the hope of getting out of Russian prison.

"And a lot of people are not going to like what I'm gonna say about this, but I kind of viewed their -- having hope as being a weakness," he said. "So I did not wanna have that hope of, like, me, you know, being released somehow and then have that taken from me."

"I wouldn't let myself hope," he later remarked.