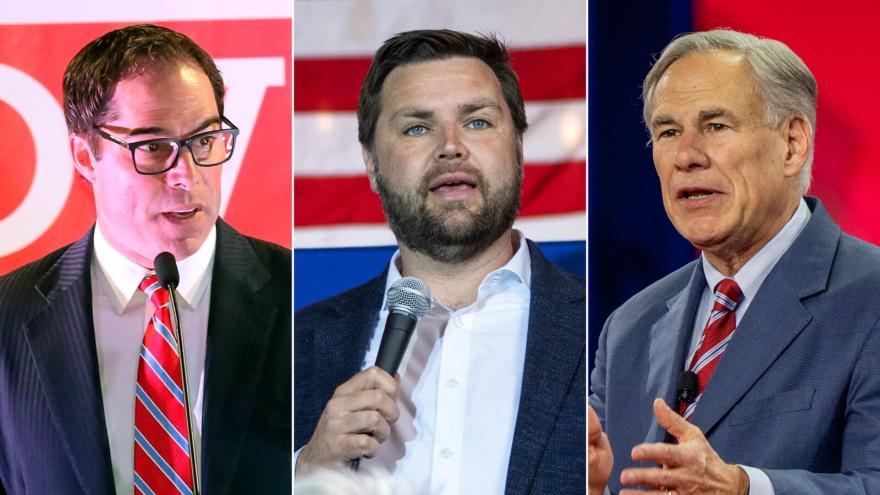 Republican midterm candidates around the country, including Mark Ronchetti, left, JD Vance, center, and Greg Abbott. are running attack ads criticizing their Democratic opponents over crime and policing. But some of their September ads have been deceptive.

(CNN) -- Republican midterm candidates around the country are running attack ads criticizing their Democratic opponents over crime and policing. But some of their September ads have been deceptive.

An ad from Ohio Republican J.D. Vance baselessly insinuated that his Democratic opponent for the US Senate, Rep. Tim Ryan, supports defunding the police.

And an ad from Mark Ronchetti, the Republican candidate for governor of New Mexico, discussed a frightening break-in at his home before attacking his Democratic opponent Gov. Michelle Lujan Grisham over crime -- without mentioning that the incident occurred 10 years ago under a Republican governor.

Here is a breakdown of the three ads.

This week, Abbott released another ad that uses some of the same sneaky editing.

The new ad shows O'Rourke appearing to say this: "I really love that Black Lives Matters and other protesters have put this front and center, to defund police forces."

But O'Rourke never uttered that sentence.

Facts First: The Abbott ad stitches together parts of two different sentences to make O'Rourke's comment about defunding the police seem more categorical than it was.

Here's what O'Rourke actually said in a June 2020 podcast interview. The Abbott ad excluded the words in bold -- attaching the words "police forces" to the word "defund" even though they were, in reality, separated by 55 other words.

"I really love that Black Lives Matters and other protesters have put this front and center, to defund, you know, these line items that have overmilitarized our police, and instead invest that money in the human capital of your community, make sure that you have the services, the help, the support, the health care necessary to be well and not require police intervention. And then also in some necessary cases, completely dismantling those police forces and rebuilding them."

Abbott's campaign did not respond to a request for comment. During the gubernatorial campaign in 2021 and 2022, O'Rourke has consistently expressed opposition to defunding the police.

O'Rourke campaign spokesman Chris Evans said in an email this week: "As both a Congressman and an El Paso City Councilmember, Beto repeatedly voted to increase funding and resources for law enforcement. As governor, Beto will ensure that law enforcement agencies have the resources they need to address violent crime, bring justice to victims, and keep our communities safe. Beto will also invest more resources in mental health services, social workers, and addiction treatment."

An ad released last week by Ohio Republican J.D. Vance, who is running for the US Senate, features Vance making this claim about his Democratic opponent, Rep. Tim Ryan: "Streets are exploding with drugs and violence while liberals like Tim Ryan attack and defund our police."

Facts First: Vance's claim about Ryan is misleading at best: Ryan opposes defunding the police and has not voted to defund the police.

The ad's use of the phrase "liberals like Tim Ryan" allowed Vance to avoid directly saying that Ryan himself has defunded the police or wants to defund the police. Still, Vance's remark certainly creates the impression that Ryan is a supporter of defunding the police. That's just not true.

Ryan's campaign said in an email that Ryan has never voted to defund the police, has never endorsed efforts to defund the police, has run ads in May, June and September expressing his opposition to defunding the police, and has helped secure extensive federal funding to support Ohio law enforcement and first responders. The Ryan campaign also noted that it is Vance, not Ryan, who has called to abolish a law enforcement agency, the federal Bureau of Alcohol, Tobacco, Firearms and Explosives (known as the ATF).

Vance campaign spokesperson Luke Schroeder said in an email that "when Tim Ryan had the chance to condemn the defund the police movement in Congress, he refused." That moment in Congress, though, does not corroborate the ad's insinuation that Ryan supports defunding the police.

Here's what happened. Ryan and other Democrats voted unanimously in March 2021 against a Republican motion known as a Motion to Recommit. The motion proposed to send a major policing reform bill back to the Judiciary Committee -- rather than passing it immediately as Democrats planned -- to express the "sense" of the House that calls to defund, disband, dismantle or abolish the police "should be condemned."

Vance spokesperson Schroeder also pointed to a Ryan quote from a 2019 town hall, which was played in the Vance ad itself, in which Ryan said that "the current criminal justice system is racist" and "the new Jim Crow." As PolitiFact noted last week, Ryan never explicitly mentioned the police in these comments, and he wasn't discussing police funding levels; he went on to talk about how a person of color is more likely to go to prison for marijuana crimes than a White person.

The ad featured Ronchetti and his wife, Krysty, telling a frightening story about Krysty and their daughters hiding in a closet, Krysty with a gun, because someone had broken into their home in what the ad calls a home invasion. Krysty said she was relieved to see the police arrive.

Ronchetti said: "Not every situation ends this way. Everybody seems to have a crime story. This is one of the biggest reasons I got into politics. Because we can't keep doing this. Governor Lujan Grisham has made it easier to be a criminal than a cop." He continued by criticizing Lujan Grisham over specific criminal justice policies.

Facts First: The Ronchetti ad left out critical context. The incident discussed by Ronchetti and his wife occurred in 2012 -- during the tenure of Republican governor Susana Martinez, not the Lujan Grisham administration.

Local news outlets including KOAT Action 7 News, KRQE News 13 and the Santa Fe New Mexican reported last week that the incident happened a decade ago. Delaney Corcoran, spokesperson for the Lujan Grisham campaign, said in an email to CNN that the ad "completely distorts the truth," both in its use of the 2012 incident and in its accusations about Lujan Grisham's record on crime.

Ronchetti campaign spokesperson Ryan Sabel argued in an email that "there is nothing to fact-check here," saying that Ronchetti was simply "sharing his family's personal story with crime, which is a reality that most New Mexicans can unfortunately relate to," and that Lujan Grisham "has been part of the problem for a long time." Sabel claimed that the same month as the incident, when Lujan Grisham was serving on the county commission for the Albuquerque area, she voted against a request from the county sheriff to hire more deputies.

But as Sabel then acknowledged after CNN pointed it out, the article he provided about the commission vote actually showed that Lujan Grisham voted to hire five additional deputies that month, just not the 20 the sheriff had asked for. Corcoran of Lujan Grisham's campaign also noted that she voted to defer, not reject, the request for the other 15 deputies, and that these other 15 ended up being approved later the same year (after Lujan Grisham had left the county commission to run for Congress). Also, the incident at the Ronchetti home happened in the jurisdiction of Albuquerque's city police department, not the county sheriff's department.

Regardless, what happened on the county commission is a sideshow here. The ad could have easily specified that the incident at the Ronchetti home occurred 10 years ago. At very least, the omission of the date, in an ad attacking Lujan Grisham's policies as governor, invited viewers to come to the inaccurate conclusion that it was an incident that occurred during the Lujan Grisham governorship.