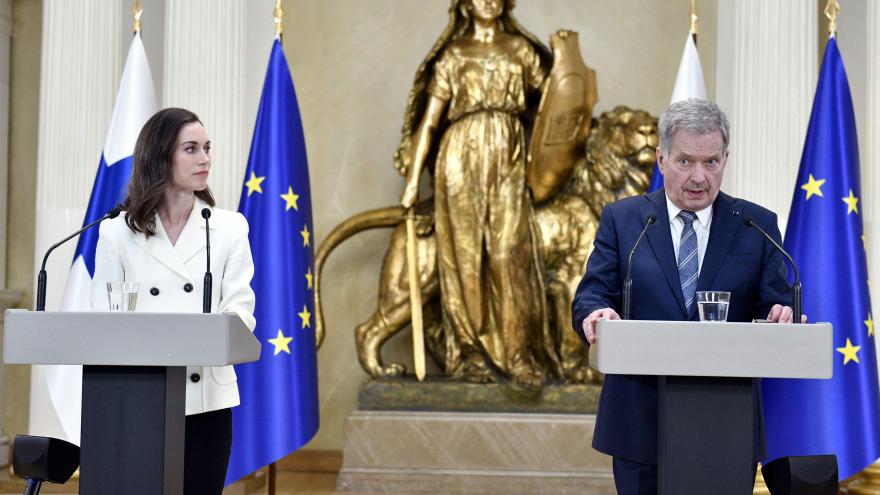 (CNN) -- Finland's government said Sunday it intends to join NATO, ditching decades of neutrality and ignoring Russian threats of possible retaliation as the Nordic country attempts to strengthen its security following the onset of the war in Ukraine. Sweden's ruling party later said it will also support joining the alliance.

The decision was announced at a joint press conference by President Sauli Niinistö and Prime Minister Sanna Marin, who said the move must be ratified by the country's parliamentbefore Finland can formally seek membership of the alliance.

"We hope that the parliament will confirm the decision to apply for NATO membership," Marin said in Helsinki on Sunday. "During the coming days. It will be based on a strong mandate, with the President of the Republic. We have been in close contact with governments of NATO member states and NATO itself."

"We are close partners to NATO but it is a historic decision that we will join NATO and hopefully we are making the decisions together," she added.

The move would bring the US-led military alliance up to Finland's 830-mile border with Russia, but could take months to finalize as the legislatures of all 30 current NATO members must approve new applicants.

It also risks provoking the ire of Russia, whose president, Vladimir Putin, told his Finnish counterpart Niinistö on Saturday that abandoning military neutrality and joining the bloc would be a "mistake," according to a Kremlin statement. On Saturday, Russia cut its electricity supply to the Nordic country following problems in receiving payments.

Since the end of World War II, during which Finland was invaded by the Soviet Union, the country has been militarily non-aligned and nominally neutral in order to avoid provoking Russia. It has indulged the Kremlin's security concerns at times and tried to maintain good trading relations.

The invasion of Ukraine has changed that calculation.

On Saturday, Niinistö called to inform Putin of Finland's intentions to join the bloc, saying "the Russian demands in late 2021 aiming at preventing countries from joining NATO and Russia's massive invasion of Ukraine in February 2022 have altered the security environment of Finland," according to a statement from the Finnish president's office.

Marin reiterated the sentiment on Sunday, telling reporters that in regards to a nuclear threat, "we wouldn't make these decisions that we are making now, if we didn't think that they are enhancing our strength or security. So of course we believe these are the right decisions and they will enhance our national security."

Sweden has expressed similar frustrations, and on Sunday the ruling Social Democratic Party announced the country should work toward joining NATO.

A statement on the party's website said the party should, in case the application is granted by NATO, work to state unilateral conditions against the placement of nuclear weapons and permanent bases on Swedish territory.

Swedish Foreign Minister Ann Linde called it "a historic decision" in a tweet after the announcement adding, "The Russian invasion of Ukraine has deteriorated the security situation for Sweden and Europe as a whole."

Both countries already meet many of the criteria for NATO membership, which include having a functioning democratic political system based on a market economy; treating minority populations fairly; committing to resolve conflicts peacefully; the ability and willingness to make a military contribution to NATO operations; and committing to democratic civil-military relations and institutions.

But NATO member Turkey, which has presented itself as a mediator between Russia and Ukraine, has expressed reservations about integrating those two countries to the alliance. Turkish President Recep Tayyip Erdogan said on Friday he is not looking at Finland and Sweden joining NATO "positively," accusing both countries of housing Kurdish "terrorist organizations."

Erdogan was referencing the Kurdistan Worker's Party (PKK) which seeks an independent state in Turkey. The group has been in an armed struggle with Ankara for decades and has been designated a terrorist organization by Turkey, the United States and the European Union.

Turkey also considers YPG fighters an extension of the PKK even through they were allies of the US-led coalition in Syria and played a major role in flushing out ISIS from northern Syria. Finland and Sweden have a Kurdish community, although Erdogan provided no detail as to whom he was referring.

Responding to Erdogan's claim, Finnish Foreign Minister Pekka Haavisto said Saturday: "Well, on the terrorism issue, I want to be very clear we are part of the coalition against ISIS, we participate to the Marrakesh meeting. Fight against the terrorist is a very important topic for us."

On Sunday, President Niinistö said he was "confused" by Erdogan's skepticism, saying that during a telephone discussion a month ago the Turkish President seemed "favorable" to Finland joining the bloc.

"I think that what we need now is a very clear answer. I'm prepared to have a new discussion with President Erdogan about the problems he has raised," he added.

While the ratification process could take time, Stoltenberg told reporters on Sunday that Turkey's intention "is not to block membership."

"I'm confident that we will be able to address the concerns that Turkey has expressed in a way that doesn't delay the membership or the accession process, so my intention is still to have a quick and swift process," he added.

Putin sees the alliance as a bulwark aimed at Russia, despite the fact that the bloc has spent much of the post-Soviet period focusing on issues like terrorism and peacekeeping.

Before Putin invaded Ukraine, he made clear his belief that NATO had edged too close to Russia and should be stripped back to its borders of the 1990s, before some countries that either neighbor Russia or were ex-Soviet states joined the military alliance.

Ukraine's desire to join the alliance, and its status as a NATO partner -- seen as a step on the way to eventual full membership -- was one of the numerous grievances Putin cited in an attempt to justify his country's invasion of its neighbor.

The irony is that the war in Ukraine has, effectively, given NATO a new purpose.

Since the Russian invasion of Ukraine in February, public support for joining NATO in Finland has leaped from around 30% to nearly 80% in some polls. Most Swedes also approve of their country joining the alliance, according to opinion polls there.

After appearing to cool the rhetoric on joining NATO in March, in a bid to placate Russia, Ukraine now hopes its application to join the bloc is considered quickly. Ukraine's Deputy Prime Minister Olga Stefanishyna told ABC that she hopes "when (it) comes to the consideration of the Ukrainian application, it will also happen much faster," she said.