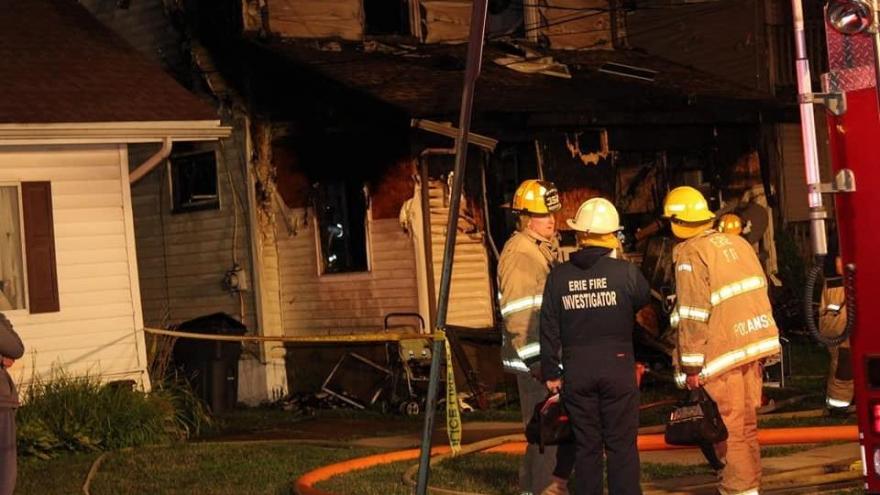 Firefighters respond to a blaze at an Erie, Pennsylvania home and daycare. Five children were killed.

Four people were injured, including two teenagers who jumped from a second-floor window onto a porch of the home in Erie to escape the flames, Erie Fire Chief Guy Santone told CNN in an interview. Santone said the homeowner was injured, along with a neighbor who tried to enter the burning home to rescue victims.

Eight people were in the home when the fire broke out around 1:15 a.m., Santone said. The home also operated as a day care, according to fire officials.

"I was just down there, there's flowers everywhere," Santone said about a memorial at the scene. "Nobody likes to see this, especially when it's kids."

Firefighters rescued the five children from second-story bedrooms at the front of the home, CNN affiliate WJET reported.

Santone said the children who died were between 8 months to roughly 8 years old.

Four of the victims were siblings who were being cared for at the day care, the fire chief said. Their siblings' mother worked the night shift, Santone said.

The homeowner's child was also killed, he said.

"The lady that lived there ran through the fire to get outside. She had burned her lungs and probably didn't realize that," Santone told WJET. "And she drove herself to the hospital, and on the way to the hospital, she crashed her car."

The woman was flown to University of Pittsburgh Medical Center for treatment, authorities said.

The Erie Regional Chamber and Growth Partnership, a non-profit, lists the address of the home as the Harris Family Daycare. The day care provides "24 hour, 7 days a week childcare service," the chamber said on its website.

Santone said fire investigators only found one smoke detector in the attic of the home.

"If there were the proper amount of smoke detectors in this structure, then most, if not all, would have survived," Santone said.

Erie, located on the shore of Lake Erie, is north of Pittsburgh.