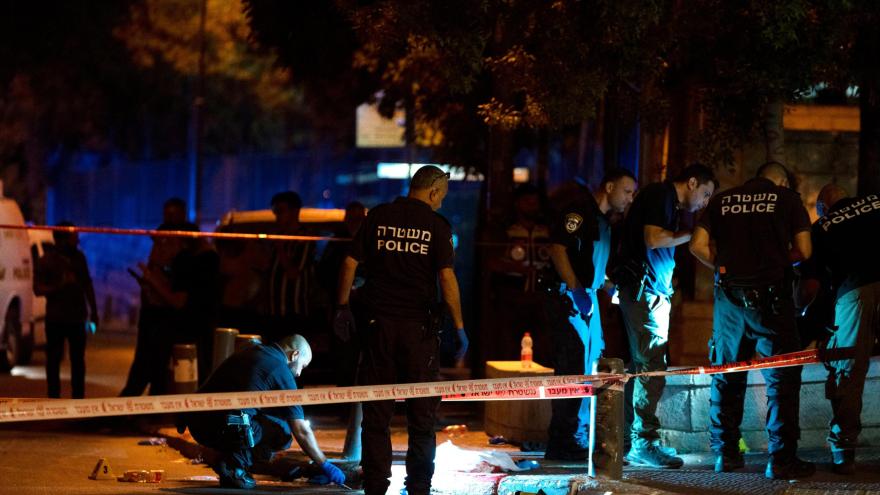 (CNN) -- At least eight people, including five Americans, were wounded in a shooting attack targeting a bus near the Western Wall in Jerusalem's Old City early Sunday morning.

Around 1:30 am local time Sunday (6:30 p.m. ET), police said in a statement that a "terrorist armed with weapons shot at a bus and vehicles in a parking lot near the Old City of Jerusalem."

The US Embassy in Jerusalem said they are "shocked and saddened" by the attack. They confirmed that US citizens were among the victims and that they were gathering more information.

"We strongly condemn all acts of terrorism and actions that exacerbate tensions," an embassy spokesperson said in a statement to CNN.

"Our thoughts are with the loved ones of the victims and we wish all of them a quick and full recovery," the statement said.

The US Ambassador to Israel, Tom Nides, also condemned Sunday's attack. "Strongly condemn the terrorist attack outside the Old City of Jerusalem. I am praying for a quick recovery for all of the innocent victims," Nides said in a tweet.

"Deeply saddened to confirm that Americans were injured in this attack. I've spoken with the families and will keep them in my prayers. Continuing to monitor the situation," he added.

Nides was confirmed as the US Ambassador to Israel in November 2021 and is married to Virginia Moseley, CNN's executive vice president of editorial for the network's US operation.

The shooter fled the scene, with security forces, the Shin Bet and the IDF in pursuit. Police said a helicopter from the Israel Police's aerial unit assisted in the search.

The suspect later turned himself into police. The weapon he carried with him was seized, according to a police spokesperson.

The suspect is an Israeli citizen from East Jerusalem, a security source told CNN.

He was not known for any terror related offenses, but had a criminal record and had spent time in prison, the security source told CNN.

The source said the suspect -- whose identity has not been released -- was born in 1996.

Israeli media has described him as a Palestinian who holds Israeli citizenship.

Police and forensic investigators have begun operations at the scene to investigate the attack, police said.

Sunday's shooting comes after hostilities in Gaza last weekend left dozens of Palestinians dead. A ceasefire between Israel and the Islamic Jihad militant group in Gaza was announced last Sunday.