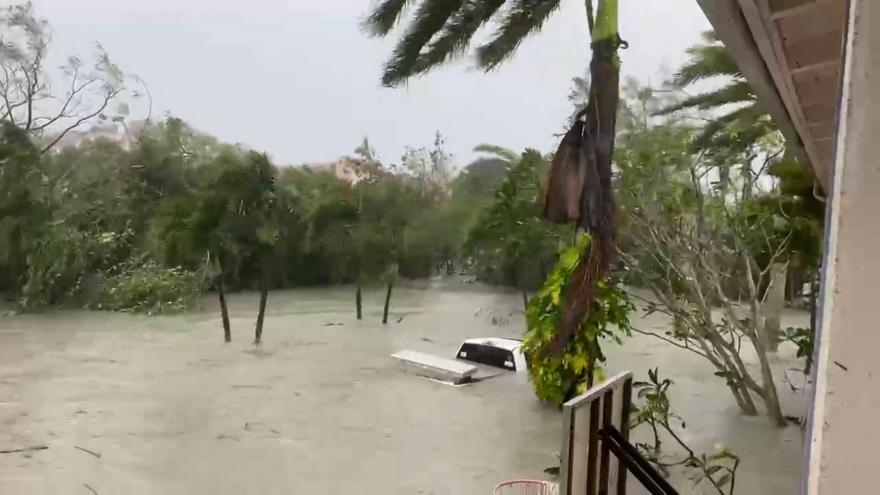 (CNN) -- In Naples, Florida, on Wednesday afternoon, Lauren Barlow watched as water crept in through her home's door and began rising across the first floor.

"Cars are floating down our street," Barlow, who was sheltering on the upper level of the house, told CNN. "Our garage completely flooded, frying our cars. The water then started to go through the door inside and is now quickly rising up the steps flooding the first floor."

Nearby, the city's fire rescue authorities posted a video on Facebook Wednesday evening walking through cold, chest-deep water as they rescued an individual from the rushing waters.

"Our East Naples deputies did 30 rescue missions today," the sheriff's office in Collier County, which includes Naples, later said in a Facebook post. "Water is everywhere. It will recede. There will be damage. Tomorrow we will have a better idea of the extent of damage."

Hurricane Ian, which made landfall as a Category 4 storm a little after 3 p.m. Wednesday along Florida's southwestern coast, battered coastal communities for hours. Its ferocious winds blew away debris, ripping down trees, setting off alarms and knocking out power lines. The life-threatening storm surge that forecasters warned of flooded homes and neighborhoods and pushed water levels in some areas to record highs. Waters in Fort Myers are higher than they've ever been observed since officials began recording measurements in 1965. By Wednesday night, the storm had weakened to a Category 2 hurricane.

John Iverson, a Fort Myers resident, told CNN on Wednesday he would have evacuated if he realized just how hard the area would be hit. Iverson was taking shelter at a friend's house Wednesday afternoon, but even there, the first floor was mostly under water, he told CNN. The cars in the home's garage and the cars in his friend's front yard were completely submerged too, he said.

Iverson added the house he was taking shelter in has multiple levels, so he is able to stay dry.

Also in the area was Don and Belinda Collins, a couple who was trapped in their home after parts of the roof caved in and water began pouring in. Around their home, streets were flooded, they told CNN's Anderson Cooper.

"We've been here 23 years now ... but this is totally different than anything I've ever seen before," Don Collins said.

Marcel Chartier, a manager at DiamondHead Beach Resort, was taking shelter at the hotel Wednesday evening as the storm pummeled the Fort Myers area, sweeping away cars and everything else in its path. Across the street, an entire building was almost entirely under water, Chartier told CNN.

"Winds are extremely strong, we can't see anything out the windows," Chartier said. "The water is very high and approaching the roof of the building across the street."

Police in Tampa urged residents Wednesday night to stay indoors and off the roads, posting a video that showed a traffic light falling and shattering in front of authorities, trees that had fallen over and roads littered with debris.

Local and state officials earlier this week issued mandatory evacuations for more than 1.75 million people across several southwestern counties including Lee, Pinellas, Sarasota and Hillsborough counties. For those who stayed behind, local authorities warned the best practice was to shelter in place, and not venture out.

Across Florida, more than 2 million people were without power Wednesday night as the storm roared through the state, according to Poweroutage.us.