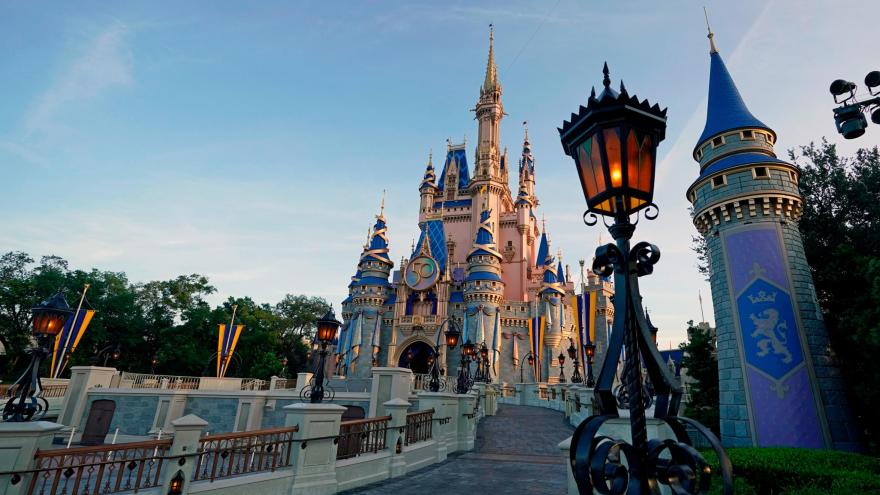 (CNN) -- The Florida legislature on Thursday gave final passage to a pair of bills aimed at Disney, weeks into the company's feud with Republican Gov. Ron DeSantis over its objections to a new law that limits certain classroom discussion on sexual orientation and gender identity.

One of the bills would eliminate the unique status that allows Disney to operate as an independent government around its Orlando-area theme parks. The other would eliminate a Disney carve-out in a social media bill that was signed into law last year but put on hold by a federal judge.

The bills passed 70-38 in the Florida House on Thursday. The vote happened without any final debate and came as several Black Democratic members were staging a protest over the congressional redistricting map. The Disney bills passed the state Senate on Wednesday, and now head to DeSantis' desk.

Disney drew the ire of DeSantis and Sunshine State Republicans earlier this year over legislation that prohibits schools from teaching young children about sexual orientation or gender identity.

After initially declining to weigh in, Disney CEO Bob Chapek publicly criticized Florida lawmakers for passing what opponents called the "Don't Say Gay" bill and apologized to the company's LGBTQ employees for not being a stronger advocate. Chapek then announced that the company would stop making political donations in Florida after decades of contributing generously, mostly to Republicans, including a $50,000 donation to DeSantis' reelection effort.

While this week's special session was originally called to finalize the once-in-a-decade work of reapportioning the state's congressional maps, state lawmakers added the Disney legislation to the docket after DeSantis this week challenged lawmakers in a surprise bombshell announcement to unravel the 55-year-old Reedy Creek Improvement Act, a unique Florida law that helped establish Walt Disney World in the state by giving the brains behind Mickey Mouse operational autonomy.

The bill would dissolve the special district on June 1, 2023.

The Reedy Creek Improvement District covers Disney's properties near Orlando, allowing the company to manage land within its boundaries and provide its own public services, such as firefighting and police. There are also significant tax advantages for Disney in the arrangement.

Republicans sponsors, often unable to give detailed answers to questions about financial and legal implications of the legislation during floor discussions, suggested that the legislature could work through logistics of the dissolution over the next year.

Florida Democrats this week have been outspoken against the bills, accusing Republicans of retaliating against Florida's largest private employer in ways that will reverberate throughout the state's important tourism economy.

"The debt service alone for Reedy Creek is over a billion dollars," Farmer said Wednesday. "This bill makes no provision as to how that debt service is going to be assumed. Local government entities must pick up assets and liabilities of any special district that is dissolved."

Democratic state Rep. Fentrice Driskell told CNN just before the votes happened on Thursday, "It's going to cost the government in Orange County and Osceola Counties and therefore the tax payers billions of dollars, I'm talking an additional tax burden that's estimated $2,200 to $2,800 per family."