Florida officials seek $250,000 fine for the operator of Orlando drop tower amusement ride after a 14-year-old fell to his death 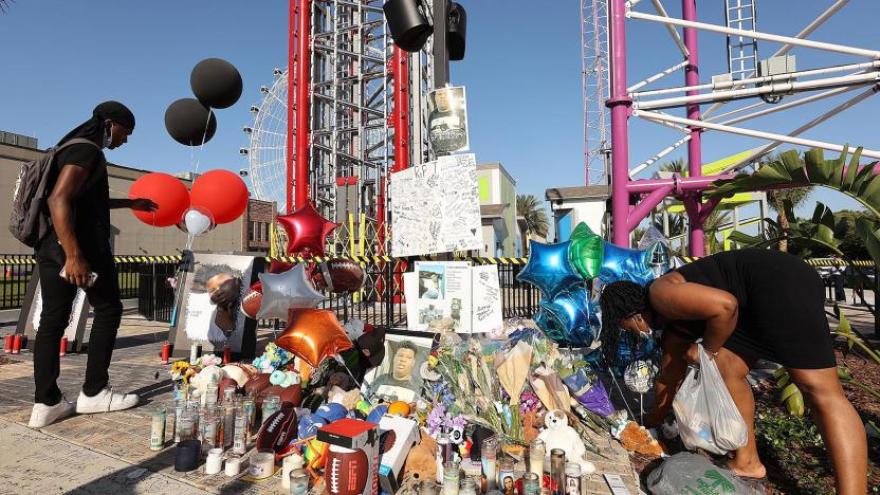 Florida officials are seeking more than $250,000 in fines from the operator of a drop tower amusement park ride from which 14-year-old Tyre Sampson fell to his death in March. Tyre died in a fall from the 430-foot-tall amusement park ride while visiting the ICON Park outside Orlando.

(CNN) -- Florida officials are seeking more than $250,000 in fines from the operator of a drop tower amusement park ride from which 14-year-old Tyre Sampson fell to his death in March, they announced Tuesday.

Commissioner Nikki Fried of the Florida Department of Agriculture and Consumer Services has filed an administrative complaint against Orlando Eagle Drop Slingshot LLC, she said in a news conference, alleging Tyre's fall was "due to changes made to the ride by the operators."

News of the complaint comes about eight months after Tyre died in a fall from the 430-foot-tall amusement park ride while visiting ICON Park outside Orlando on his spring break. The ride, which would take riders up before dropping them nearly 400 feet at speeds reaching more than 75 mph, was thereafter closed, and last month, the operator said it would be taken down.

Representatives of the company and attorneys for Tyre's family did not immediately respond when asked for comment Tuesday.

The complaint cites an initial report by a forensic engineering firm commissioned by Florida officials to investigate the incident that found Tyre fell from the ride because he was not properly secured. That was primarily because a seat sensor had been adjusted to let the ride operate with a greater gap than normal between his harness and his seat, the report found.

The seat sensors normally would not let the ride function unless they indicated each seat's harness is lowered to a point where it should secure a rider -- but the adjustment of the sensor in Tyre's seat, as well as a similar adjustment on a second seat, allowed the ride to operate with a greater gap than normal between harness and seat, the report by Quest Engineering and Failure Analysis Inc. reads.

"The ride was allowed to commence, even though the ride was unsafe and led directly to his fall," Fried said Tuesday.

The department's investigation also found there was "minimal training on the ride," Fried said, and that none of the attendants or operators had read the manufacturer's manual. Additionally, attendants and the operator confirmed they had been told to use the two seats in which the sensors were adjusted to for "larger guests."

The ride's operations and maintenance manual, previously posted online by state officials, indicated the maximum passenger weight should be 130 kilograms, or approximately 287 pounds. Tyre, just over 6 feet tall, weighed 383 pounds, according to his autopsy, which found the cause of death was blunt for trauma and the manner of death was an accident.

In addition to the fine, the department is seeking a "permanent revocation of the ride's operating permit" in the state, Fried said, adding the findings of her staff's investigation would be forwarded to the Orange County Sheriff's Department to consider criminal charges.

Orlando Eagle Drop Slingshot LLC has 21 days to request a hearing if it wants to dispute any of allegations by the Department of Agriculture and Consumer Services, which is responsible for inspecting amusement rides.