For the first time, a sea turtle has laid its eggs on this Texas beach 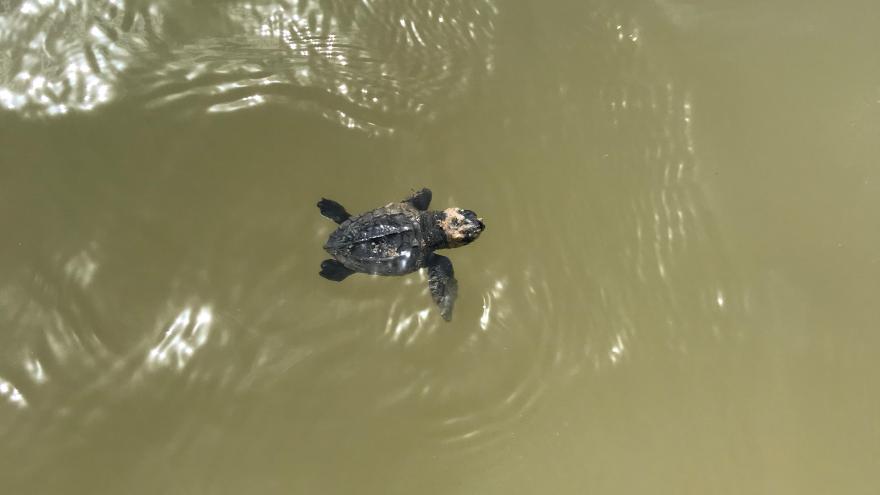 (CNN) -- For the first time, the world's rarest species of sea turtle has laid eggs on Magnolia Beach in Texas, experts say.

On Monday morning, R.J. Shelly, a Calhoun County Marine Extension Agent, received a call from the county commissioner after maintenance workers noticed sea turtles hatching from a nest on the beach. They were headed towards a road, not the water.

Shelly sent pictures of the hatchlings to Pamela Plotkin, director of the Sea Grant at Texas A&M University and a marine scientist specializing in sea turtles. Plotkin identified the baby turtles as Kemp's ridley sea turtles, the smallest and most endangered sea turtles in the world.

Both Shelly and Plotkin were thrilled by the discovery.

"As far as we know, there's never been a Kemp's ridley nest on Magnolia Beach, ever," Shelly told CNN.

He says that when he arrived, he found a small depression in the sand. Over the phone, Plotkin suggested he help excavate the nest.

"So I kind of got down on my hands and knees and I real gently brushed a little bit of sand back and then -- lo and behold, there's an egg, there's one hatching," he said. "We watched several of the turtles hatch in front of our eyes."

Shelly spent around four hours assisting the hatchlings, making sure they got to the water instead of the dangerous road nearby. He estimated that between 40 and 50 sea turtle hatchlings made it to the water from the nest.

"I've been working on the bay for 31 years, and I've never seen a sea turtle nest hatch," said Shelly. "Normally, a person would never get an opportunity to hold a sea turtle hatchling, but because of the danger of the roadway being so close, and the fact that these are critically endangered, the decision was made."

Plotkin told CNN that Kemp's ridley sea turtles "were once very abundant, and because they were overharvested and caught accidentally in fisheries for many years, they became critically endangered."

But in the last 40 years, the population has started to recover thanks to the work of conservationists. They have implemented programs to protect sea turtle nests and reduce accidental deaths caused by fishing nets.

"Most of them nest at only one beach in Mexico," said Plotkin. "They have started spreading north, and now we have a few hundred that will come and lay their eggs on Texas beaches."

However, it's "unheard of" for a Kemp's ridley sea turtle to swim from the ocean into the enclosed space of Lavaca Bay to lay its eggs, instead of laying them on the beaches along the Gulf of Mexico.

Plotkin said she was "stunned" when Shelly sent her photos of the tiny hatchlings.

Female sea turtles can lay as many as 90 to 100 eggs at a single time, according to Plotkin. But they leave the nests long before the eggs hatch, leaving the hatchlings susceptible to predators like seagulls, or to technological threats like cars.

Additionally, sea turtles typically return to the beaches where they were hatched when it's time to lay their own eggs. Scientists still don't understand completely how the turtles recognize the beaches. Shelly made sure to let each hatchling explore the sand around the nest, which may play a key role in helping them "imprint" on the beach, according to Plotkin.

"R.J. did the best thing possible. He gave them opportunity to crawl down beach and get their bearings, to do what they need to do in order to remember that beach," she said.

If the hatchlings survive, when they reach adulthood in 15 years they "certainly could" return to Magnolia Beach, Plotkin says.

Plotkin and Shelly both say that the birth of the sea turtles represents a victory for conservation of the species.

"Any time you see a Kemp's ridley sea turtle laying eggs on a beach, it is a win for conservationists because there were only a few hundred left on this planet in the mid-1980s," Plotkin said.