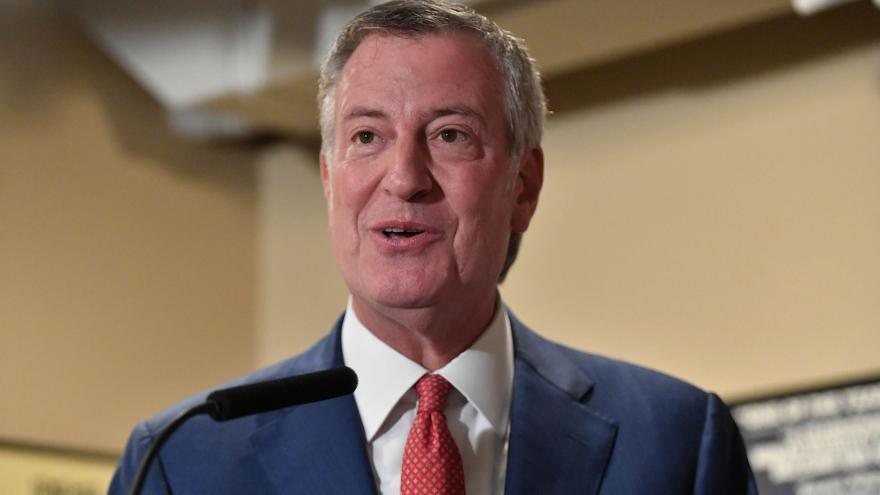 (CNN) -- Former New York City Mayor Bill de Blasio announced on Friday that he will run for Congress in a newly drawn district that includes parts of Manhattan and his home borough of Brooklyn, and he soon drew a high-profile primary challenger in Democratic Rep. Mondaire Jones.

De Blasio left office less than six months ago after serving two terms as mayor. He had previously considered a run for governor before deciding against it. But with the jumbling of New York's redistricting process, which has seen one congressional map drawn by state Democratic lawmakers struck down by New York's highest court and a new one, drawn by a court-appointed "special master," now approved, de Blasio saw his opportunity.

"Wherever I go, people ask: can things get better? I say from my heart: YES, but WE have to make them better," de Blasio tweeted Friday morning. "In our neighborhoods and our nation, the way to save our democracy is to be part of it. So as I declare my candidacy in #NY10 I ask you to join us."

Not long after, Jones, who currently represents a suburban seat north of New York City, said he would also seek the Democratic nomination for the new 10th Congressional District.

"This is the birthplace of the LGBTQ+ rights movement. Since long before the Stonewall Uprising, queer people of color have sought refuge within its borders," Jones, who is gay, wrote on Twitter early Saturday morning. "I'm excited to make my case for why I'm the right person to lead this district forward and to continue my work in Congress to save our democracy from the threats of the far right."

De Blasio first made his announcement during an appearance Friday on MSNBC. De Blasio, whose failed bid for the 2020 Democratic presidential nomination hurt his standing at home, said his time as mayor gave him a unique insight into the city's troubles.

"Polls show people are hurting, they need help, they need help fast, they need leaders that can actually get them help now," de Blasio said. "I know how to do it from years of serving the people of this city."

Jones, who was first elected in 2020, also criticized the new congressional map, saying on Twitter that it was "the result of partisan politics -- drawn by an out-of-state, Republican court appointee."

The borders for the new 12th District in Manhattan have alsoset off a primary clash between longtime Democratic incumbent Reps. Carolyn Maloney and Jerrold Nadler.