From 'geriatric pregnancy' to '35+ pregnancy:' There's a better way to talk to pregnant people 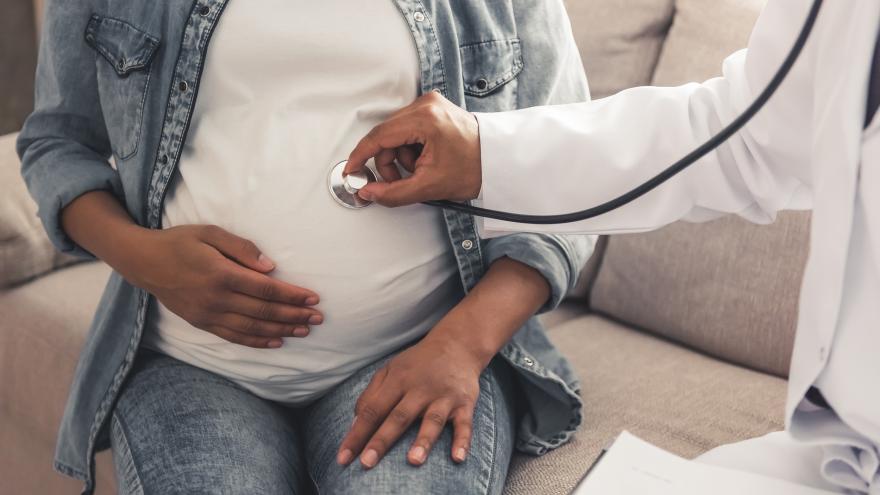 (CNN) -- Ours is not a culture that makes life easy for pregnant people.

There's the side-eye from busybody strangers, in disapproval of a coffee order or workout routine (or lack thereof). There are the bosses and colleagues who refuse to accommodate their pregnant employees, in ways subtle and not.

Then there's the lack of universal paid leave, forcing many new moms to choose between healing from childbirth or paying their rent. As if the act of gestation -- and conception for those struggling with infertility -- was not enough.

One might hope that the doctor's office, a site of reason and science, would be an island of support and empathy amid the sea of judgment. So often, it's anything but.

These are all actual, official medical wphrases used by doctors to speak to pregnant people as well as those struggling with conception. And, trust me, they're not any more tolerable when spoken out loud.

Peanut, a social network for mothers, has heard again and again the pain, frustration and anger these terms have caused its members. These are all relatively common sentiments, according to research.

This spring, Peanut decided to try to help. Its staff convened a panel including a linguist, obstetrician and two psychologists and tasked them with rewriting the phrases used to describe pregnancy and early parenthood.

The resulting glossary, which they're calling the Renaming Revolution, includes more than 60 new and improved, nonjudgmental medical terms. It's one piece of a broader, ongoing effort to make conception and pregnancy language more humane.

A few highlights from Peanut's new glossary include replacing "biological clock," with all its ticktock neurosis, with "family planning."

"Habitual aborter" has become "recurrent miscarriage," referring to pregnant people who have had three or more pregnancy losses before 20 weeks of gestation.

Age is just one of many factors determining the potential outcome of a pregnancy, according to Renaming Revolution panelist Dr. Somi Javaid, OB/GYN, surgeon and founder of HerMD. There's no reason to make these pregnant people feel as though they're too old to responsibly conceive a child.

When pregnant people miscarry but their bodies don't discharge all the tissue naturally, doctors must intervene. This is referred to as "evacuation of retained products of conception." The panel suggests "compassionate removal" instead, which honors that "products of conception" can feel a little clinical and cold to those whose miscarriage has brought them grief.

While writing the new terms, the panelists often went in two different directions, said contributor Amanda Montell, feminist linguist and author of "Wordslut." With some phrases, it was better to be more specific. Why call a uterus "inhospitable" when instead you can just tell a patient what, exactly, is wrong with it?

Other times, like with "compassionate removal," sensitivity won out.

"Language has incredible power to legitimize and delegitimize our experiences," Montell said. As such, she and her fellow panelists attempted to come up with vocabulary that would minimize the potential for grief and self-blame.

The new glossary also swaps "breast is best," for "fed is best," a phrase that has been promoted by baby-feeding activists in recent years.

This shift has happened alongside a slower-moving one in doctors' offices toward more sensitive language.

Going all the way back to the 1980s, doctors and researchers began pushing for the use of "miscarriage" instead of "spontaneous abortion" in medical literature.

Dr. Kara Goldman, a reproductive endocrinologist and assistant professor of obstetrics and gynecology at Northwestern Medicine, said that a rising number of physicians are aware of the problems and are using more compassionate language with patients and colleagues."

"We know that infertility and pregnancy loss are often accompanied by deep feelings of inadequacy, shame and guilt, and (the) last thing a patient needs to hear is that she is somehow a failure or part of her body failed her or is incompetent," said Goldman, who was not involved with the Peanut glossary.

"The words we use really do matter, patients hear them and process them on a deep level."

Why change is slow

While few doctors want to make their patients feel bad, Goldman said that old habits die hard. The root of the problem, she explained, lies with the way pregnancy and infertility is coded in medical records and communications with insurance companies.

Doctors have to be more deliberate about toggling between what they say out loud and what they write on the form, she said.

Change to these codes would require updating the International Classification of Diseases which is overseen by the World Health Organization.

"I imagine this will take an organic and grassroots movement," Goldman said.

Women have had enough

Michelle Kennedy, founder and CEO of Peanut, believes women are ready for it.

"I was called geriatric when I was pregnant with my daughter at age 35 (in 2018)," she said. "At that point I just thought, 'that's stupid' and had a little chuckle around it. But later I realized, it is not funny. We don't have to say it is OK, and we have the ability to change it."

She said the conversations on Peanut have helped her see just how damaging these phrases can be to women's mental health.

"This is an inflection moment. We are talking more about the mental health of women, and that includes talking about this terminology and how it affects our mental health," she said.

There's a long history of women being told to remain cool while being sexually harassed, paid less, working a second shift or worse. The patriarchy has made it so women's complaints are seen as a personality default as opposed to a legitimate grievance against a system tipped against them. But eventually, if enough women complain, the flaws of the system are revealed.

How to bring it up with your doctor

The first step is to take the new glossary, or a couple of preferred phrases from the glossary, into a medical provider and explain why you like them better, said Javaid, the OB/GYN.

Javaid wants women to remember that the medical system has been biased against women on a number of fronts -- including who is studied, what is funded and how things are discussed -- for a long time. This is not, she noted, in anyone's head.

"It's not too much to ask to have women's point of view honored," she said. And she believes many providers will agree.

"Tell them you understand that some terms are used for insurance purposes, but you prefer that they not be used in conversation. Most providers will be open to this," Javaid said.

"What makes the glossary so great is that it gives patients and doctors somewhere to start the conversation, a way to meet in the middle and communicate."