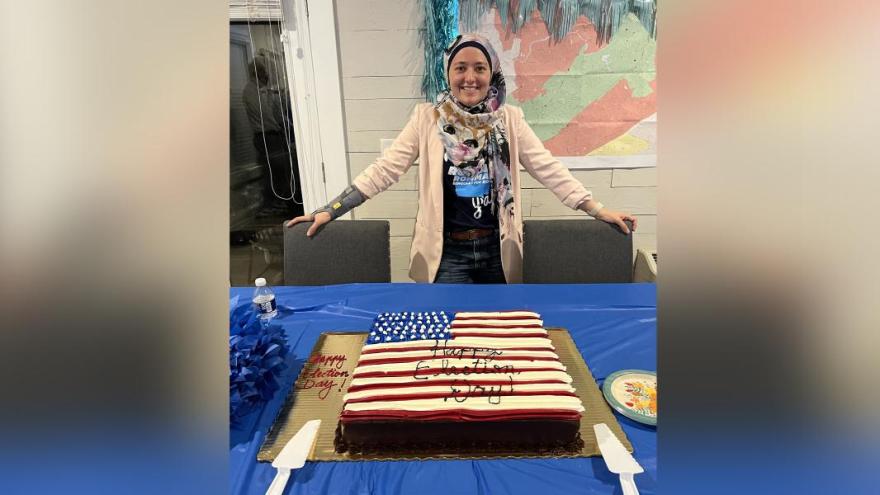 Ruwa Romman has been elected into the Georgia House of Representatives, District 97.

(CNN) -- Ruwa Romman remembers the sadness she felt as an 8-year-old girl sitting in the back of a school bus watching classmates point to her house and erupt in vicious laughter.

"There's the bomb lab," they jeered in yet another attempt to brand her family as terrorists.

On Tuesday, the same girl -- now a 29-year-old community organizer -- made history as the first known Muslim woman elected to the Georgia House of Representatives, and the first Palestinian American elected to any office in the state.

After 10 months of relentless campaigning, the Democrat said she is eager to begin representing the people of District 97, which includes Berkeley Lake, and parts of Duluth, Norcross, and Peachtree Corners in Gwinnett County.

As an immigrant, the granddaughter of Palestinian refugees, and a Muslim woman who wears the hijab, or Islamic headscarf, the road to political office hasn't been easy, especially in the very Christian and conservative South.

"I could write chapters about what I have gone through," Romman told CNN, listing the many ways she's faced bigotry or discrimination.

"All the times I am 'randomly' selected by TSA, teachers putting me in a position where I had to defend Islam and Muslims to classrooms being taught the wrong things about me and my identity... it colored my entire life."

But those hardships only fueled her passion for civic engagement, especially among marginalized communities, Romman said.

"Who I am has really taught me to look for the most marginalized because they are the ones who don't have resources or time to spend in the halls of political institutions to ask for the help they need," she said.

Romman began in 2015 working with the Georgia Muslim Voter Project to increase voter turnout among local Muslim Americans. She also helped establish the state chapter for the Council on American-Islamic Relations, the nation's largest Muslim civil rights and advocacy organization.

Soon after, Romman began working with the wider community. Her website boasts: "Ruwa has volunteered in every election cycle since 2014 to help flip Georgia blue."

She said her main focus is "putting public service back into politics," which she intends to do by helping expand access to health care, bridging the economic opportunity gap, protecting the right to vote, and making sure people have access to lifesaving care like abortion.

"I think a lot of people overlook state legislators because they think they're local and don't have a lot of impact, not realizing that state legislatures have the most direct impact on them," Romman said. "Every law that made us mad or happy started in the state legislature somewhere."

'We are real people with real dreams'

Romman said she always wanted to influence the political process, but never thought she'd be a politician.

The decision to run for office came after attending a Georgia Muslim Voter Project training session for women from historically marginalized communities, where a journalist covering the event asked if she wanted to run for office.

"I told her no, I don't think so, and she ended up writing a beautiful piece about Muslim women in Georgia, but she started it with 'Ruwa Romman is contemplating a run for office,' and I wasn't," Romman recounted. "But when it came out, the community saw it and the response was so overwhelmingly positive and everyone kept telling me to do it."

Two weeks later, Romman and a group of volunteers launched a campaign.

She was surrounded by family, friends and community members who were rooting for her success. Together, they knocked on 15,000 doors, sent 75,000 texts, and made 8,000 phone calls.

"My opponent had used anti-Muslim rhetoric against me, saying I had ties to terrorism, at one point flat-out supporting an ad that called me a terrorist plant," she said.

Chan did not respond to CNN's request for comment.

It was the same type of bullying Romman faced as a schoolgirl, she said. Only this time, she wasn't alone. Thousands of people had her back.

"What was incredible is that people in my district sent his messaging to me and said 'This is unacceptable. How can we help? How can we get involved? How can we support you?' and that was such an incredible moment for me," she said.

It was also ironic, Romman added, because her passion for her community and social justice is rooted in her faith: "Justice is a central tenant of Islam," she pointed out. "It inspires me to be good to others, care for my neighbors, and protect the marginalized."

It's also rooted in her family's experience as Palestinian refugees, who she said were banished from their homeland by Israel in the 1948 Arab-Israeli War.

"My Palestinian identify has instilled in me a focus on justice and care for others," Romman said. "Everyone deserves to live with dignity. I hope that Palestinians everywhere see this as proof that consistently showing up and working hard can be history making.

"I may not have much power on foreign policy, but I sincerely hope that I can at least remind people that Palestinians are not the nuisance, or the terrorists, or any other terrible aspersion that society has put on us," she added. "We are real people with real dreams."

Romman joins three other Muslim Americans elected to state and local office in Georgia this election cycle, according to the Georgia Muslim Voter Project.

"We've had Muslim representation at the state level in Georgia, but these wins take representation for Georgia Muslims further than ever before because now we have more gender and ethnic representation for Muslims," the group's executive director Shafina Khabani told CNN. "Not only will we have a representation that looks like us and aligns with our values, but we will have an opportunity to advocate and influence policies that impact our communities directly."

"Having diversity in political representation means better laws, more accepting leadership, and welcoming policies for all of Georgia," she said.

More than anything, Romman hopes her election points to a future free of hate and bigotry.

"I think this proves that people have learned that Muslims are part of this community and that tide of Islamophobia is hopefully starting to recede," Romman added.

Looking back at her childhood, Romman wishes she could tell her younger self things would get better with time, and that one day she would not only make Georgia history, but hopefully a real difference in the world.