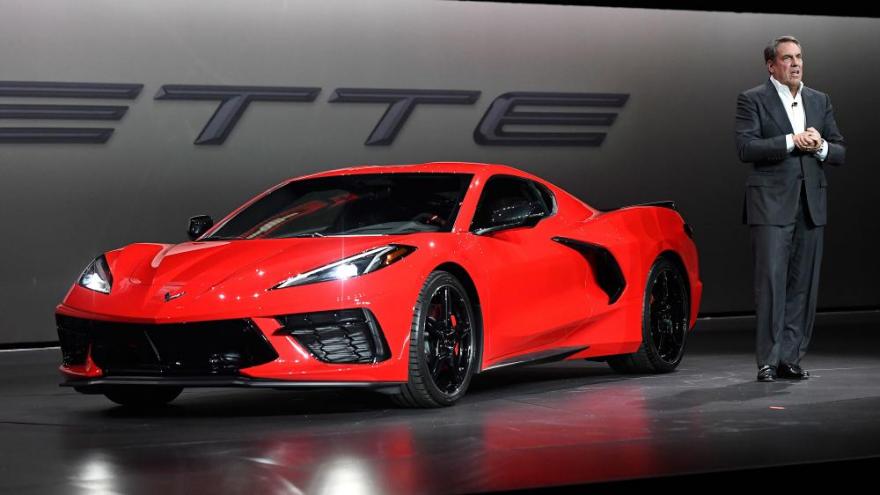 Mark Reuss, president of General Motors Company, unveils the 2020 mid-engine C8 Corvette Stingray during a news conference on July 18, 2019 in Tustin, California. Two General Motors engineers learned that lesson the hard way last week, when they were arrested for racing in Bowling Green, Kentucky -- not far from the factory that builds the legendary sports cars.

Two General Motors engineers learned that lesson the hard way last week, when they were arrested for racing in Bowling Green, Kentucky -- not far from the factory that builds the legendary sports cars.

Thim was driving a red Corvette that reached a speed of 120 mph, according to the citation. Derkatz was in a white Corvette that was clocked at 100 mph.

The posted speed on the road was 45 mph.

They were charged with reckless driving, racing on a public highway and driving more than 26 mph faster than the posted speed limit.

A third Corvette was driving with the men, but the driver did not participate in the race and was not cited, police said.

The men identified themselves as GM employees, according to their citations. Their LinkedIn biographies indicate they are engineers who are working in the Corvette program.

"We are aware of an incident involving our test vehicles and are currently investigating. Safety remains our overriding priority at General Motors. We have no further comment at this time," General Motors said in a statement.

The 2020 Corvette, which will retail for about $60,000, is the latest version of the sports car and is not yet available to the public.

The base version of the new Corvette, named MotorTrend's Car of the Year in November, has a 495-horsepower V8 engine and an eight-speed automatic transmission. It's a departure from previous models because the motor is more or less in the center of the car, rather than under the hood.

Automotive journalists voted it the North American Car of the Year on Monday.

Hunters put the squeeze on 80 snakes in Florida's Python Bowl