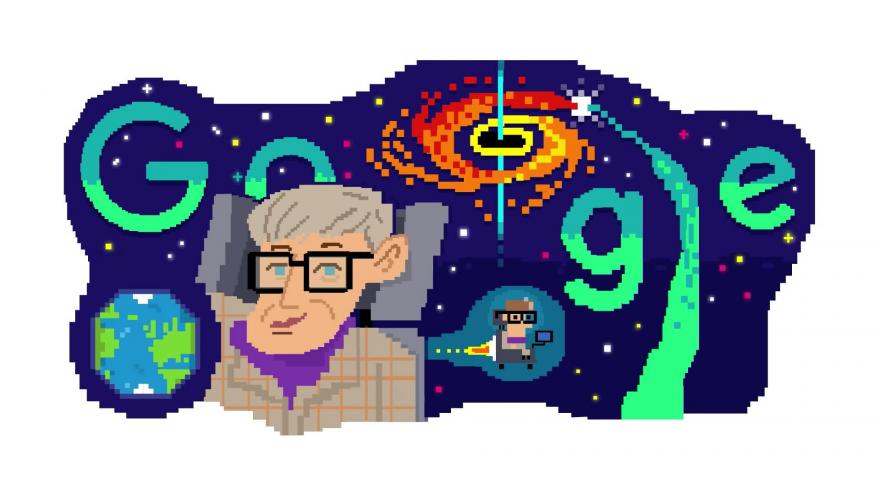 (CNN) -- Google on Saturday is paying tribute to renowned scientist Stephen Hawking, who overcame a debilitating disease to continue probing the mysteries of the universe, for what would be his 80th birthday on Earth.

Hawking, who died in 2018 at the age of 76, was also a cosmologist, astronomer, mathematician and author of numerous books including the landmark "A Brief History of Time," which has sold more than 10 million copies.

A Google Doodle, which is a temporary alteration of the search engine's logo to celebrate special occasions, was created by Matthew Cruickshank in honor of Hawking.

"Today's video Doodle celebrates one of history's most influential scientific minds, English cosmologist, author, and theoretical physicist Stephen Hawking," Google wrote in a statement. "From colliding black holes to the Big Bang, his theories on the origins and mechanics of the universe revolutionized modern physics while his best-selling books made the field widely accessible to millions of readers worldwide.

The scientist had ALS (amyotrophic lateral sclerosis), a neurodegenerative disease also known as Lou Gehrig's Disease, which is usually fatal within a few years. He was diagnosed in 1963, when he was 21, and doctors initially gave him only a few years to live.

The stop-motion animation begins with Hawking's trademark synthesized voice narrating the doodle, saying his "expectations were reduced to zero at 21. Everything since then has been a bonus. Although I cannot move and I have to speak through a computer, in my mind I am free."

"I have spent my life traveling across the universe inside my mind," his voice says. "My goal is simple: It is a complete understanding of the universe, why it is as it is and why it exists at all. One of the basic rules of the universe is that nothing is perfect. Perfection simply doesn't exist. Without imperfection, neither you nor I would exist."

A statement on the animation from Hawking's daughter Lucy and sons, Robert and Tim Hawking, reads: "We think he would have loved the Doodle and been very entertained to see his long, distinguished life expressed so creatively in this briefest history of all, a two-minute animation!"

"We also believe he would have found it important to show that he never allowed the challenges of his physical condition to limit his power of expression nor his determination to make an impact on the world in which he lived. We hope that his example offers inspiration and hope globally to all who face great challenges at this difficult time," the statement continues.

Hawking was born in 1942 in Oxford, England, and was "fascinated by how the universe functioned from a young age," Google's statement reads.

Hawking's groundbreaking work on black holes in 1979 prompted Cambridge to appoint him as the Lucasian Professor of Mathematics, a position held by Isaac Newton in 1669, according to Google's statement. Hawking's doctoral thesis was released to the public in 2017 on a University of Cambridge website, "which crashed due to enormous amounts of traffic," the statement says.

With fellow physicist Roger Penrose, Hawking merged Einstein's theory of relativity with quantum theory to suggest that space and time would begin with the Big Bang and end in black holes. He also discovered that black holes were not completely black but emit radiation and would likely eventually evaporate and disappear.

"Black holes are not really black after all. They glow like a hot body and the smaller they are, the more they glow," Hawking's voice says during the animation.

The doodle ends with one of Hawking's famed quotes: "We are very, very small. But we are profoundly capable of very, very big things. There should be no boundaries to human endeavor. However bad life may seem, while there is life, there is hope. Be brave, be curious, be determined, overcome the odds. It can be done."