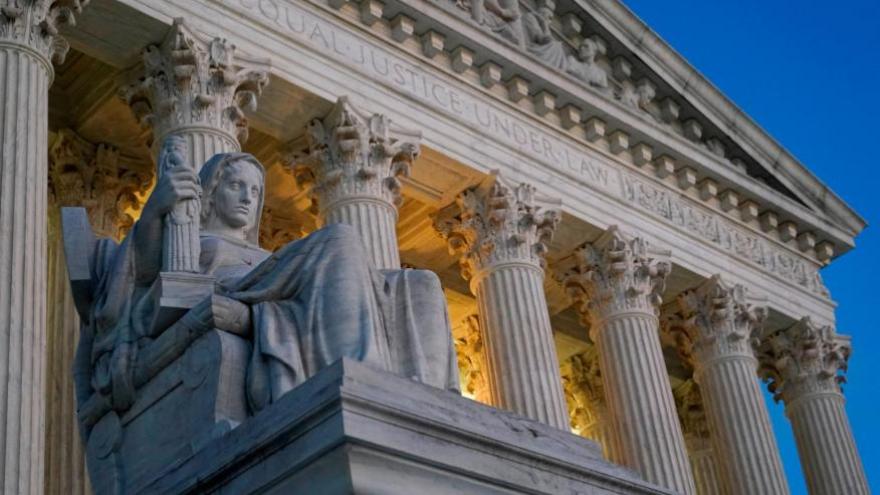 (CNN) -- A collection of Republican-led states argued on Wednesday that the Supreme Court should keep President Joe Biden's student debt forgiveness policy on hold while the litigation around it plays out, pointing to fact that the Biden administration has extended its pause on student loan payments.

The Republican states, which have already obtained an appeals court order blocking the implementation of the controversial program, said the extension showed that there would be no harm inflicted by the court order being left in place.

"The Department [of Education] can point to no emergency or imminent harm because, just yesterday, the agency extended the payment pause on student loans until the summer of 2023," they wrote in the new filing.

Federal student loan payments were set to resume in January after a years-long pandemic pause. But the Biden administration said Tuesday that it is extending the pause until 60 days after the pending litigation over the forgiveness program is resolved. If the program has not been implemented and the litigation has not been resolved by June 30, payments will resume 60 days after that.

The Wednesday filing by the states came in response to a request from the Biden administration that the Supreme Court lift the hold that has been placed on the student debt relief program, which would forgive up to $20,000 in loans for individual borrowers who earned less than $125,000 in either 2020 or 2021.

The Republican states accused the Biden administration of relying "on the COVID-19 pandemic" as "a pretext to mask the President's true goal of fulfilling his campaign promise to erase student-loan debt."

The policy was set to begin going into effect earlier this fall, but was blocked by the 8th US Circuit Court of Appeals in a lawsuit brought by Nebraska, Missouri, Arkansas, Iowa, Kansas and South Carolina.

They claim that in rolling out the program, Department of Education Secretary Miguel Cardona went beyond the authority he has under law to cancel individual debts. They also argue that the department violated administrative law in how it launched the policy.

The states defended the appeals court order blocking the relief program, telling the Supreme Court on Wednesday that they will suffer the types of harm that make it appropriate for a court to intervene.

This procedural threshold -- known as standing -- has been a legal obstacle for many opponents of the program who have tried to block it in court, including challengers whose requests for Supreme Court intervention were previously denied. The states in the new filing argue that they'll suffer a loss of tax revenue and other kinds of injuries if the debt relief program goes into effect.

The states also pointed to the ruling from a federal judge in Texas in a separate case that struck down the student debt relief policy, which the administration has appealed to the 5th US Circuit Court of Appeals. That ruling will remain in effect even if the Supreme Court lifts the hold placed by the 8th Circuit, the states noted in their filing Wednesday.

The Biden administration has indicated it will take that case to the Supreme Court as well if the 5th Circuit leaves in place the ruling striking it down.

In the request it put before the Supreme Court, US Solicitor General Elizabeth Prelogar argued that leaving the program on hold "leaves millions of economically vulnerable borrowers in limbo, uncertain about the size of their debt and unable to make financial decisions with an accurate understanding of their future repayment obligations."

Prelogar told the Supreme Court that the program was a lawful endeavor "to ensure that borrowers affected by a national emergency are not worse off in relation to their student loans."