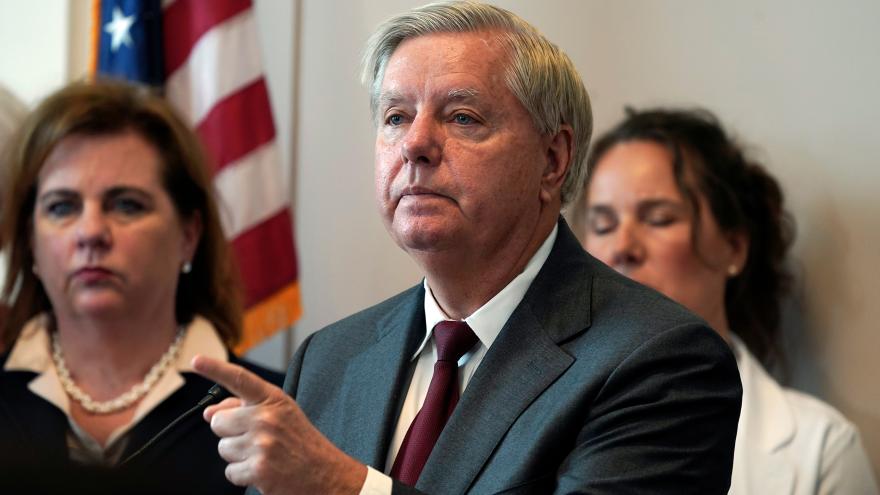 (CNN) -- Republican Senate candidates eager to make the 2022 midterms about inflation, crime and President Joe Biden's first term have a new dilemma in Sen. Lindsey Graham's bill that would ban abortions after 15 weeks of pregnancy.

The bill, which the South Carolina Republican introduced this week on a day of disappointing inflation news, presents his party with problems that are two-fold as they look to flip the House and Senate in November: Not only does it resurface the abortion debate, a topic many Republicans have sought to avoid since the Supreme Court, in a publicly unpopular decision, overturned Roe v. Wade in June, but it steps on the answers GOP candidates had coalesced around this summer -- that abortion should be an issue left to the states, not the federal government.

Many Republican Senate candidates appear ill-prepared to respond to the Graham bill, with several either distancing themselves from it, obfuscating with their answers or just not engaging on the topic, while GOP leadership appears reluctant to endorse Graham's proposal. Other nominees have more eagerly embraced it, believing it gives them a position to counter Democratic attacks tying them to some of the most extreme state measures or the threat of a total national ban. (Graham's proposal provides exceptions for abortions required to protect the life of the mother, and if the woman becomes pregnant through rape or incest.)

In private, though, many Republican operatives are rolling their eyes at Graham, especially those tasked with winning key Senate seats. Republicans only need a net gain of one seat to flip the chamber, but the shifting political landscape in the months since the Supreme Court's decision has already dimmed hopes of an overwhelming red wave.

"It certainly does complicate some things," said a Republican operative working on Senate races. "For some candidates, this is a fight they are willing to have. ... But for others, they don't want to talk about abortion at all."

"Lindsey is trying to be helpful. But he doesn't always know the best way to do it," the operative added.

That has been clear in some of the strained ways Republican Senate candidates have responded to the bill.

Georgia Senate nominee Herschel Walker took two incongruent positions in his statement, saying he believes "the issue should be decided at the state level" but that he would support such a federal law. Pennsylvania Senate nominee Mehmet Oz issued his standard statement on being "pro-life" with exceptions for rape, incest or the life of the mother, but did not take a firm position on the Graham bill. Other Republican Senate nominees did not respond to CNN's questions, including Ohio's J.D. Vance and North Carolina's Rep. Ted Budd.

Several conservative media outlets have reacted to the bill with frustration at the political inconvenience it poses for Republican candidates. The Wall Street Journal editorial board criticized Graham this week for "taking a big political gamble" that exposes GOP candidates and gives swing voters in important states a reason to vote against the party. A recent Wall Street Journal survey found 57% of registered voters oppose a 15-week ban with an exception for the health of the mother.

But a source familiar with the South Carolina Republican's thinking said Graham believes that trying to sidestep the abortion issue is not working for Republicans while Democrats make it a central focus in virtually every key race; as much as the GOP wants to talk about other topics, like the economy, it's just not realistic.

Members of the anti-abortion movement agree that offense, not defense, is the best position on the issue.

Democrats, however, are happy to have Republicans stepping into the debate. Emboldened after voters in Kansas rejected a ballot measure that would've given the GOP-led state legislature the ability to push an abortion ban and after voters in New York and Alaska helped Democrats win House special elections by running on abortion, Democrats have responded to the Graham bill by redoubling their efforts, gleefully noting the difficult position this puts Republicans in.

"Senate Republicans are putting one of the ugliest, least popular pieces of their agenda on full display," said David Bergstein, top spokesman for the Democratic Senatorial Campaign Committee. "For voters, it will be another powerful argument to vote against GOP Senate candidates in November."

Graham was even on the defensive during what would normally be a friendly interview with Fox News, with host Jesse Watters taking him to task for giving Democrats "an out" on the economy. Inflation, which Republicans have been hammering Democrats over for most of the campaign, ticked back up in August, according to government data released Tuesday -- the same day Graham unveiled his proposal.

"I am proudly pro-life, and I have no apology for being pro-life, and there is no bad time to defend the unborn," Graham said in the interview, at one point raising his voice. "I don't think there is a bad day to stand up for the unborn. ... We need to go on the offensive here."

Graham largely didn't engage in the tactics behind making such an announcement two months before Election Day, instead asking, "If not now, when? If not me, who?"

Not all Republicans are running from Graham or the 15-week limit. Despite his silence on the bill, Vance will attend a fundraiser next month with the South Carolina senator. And Florida Sen. Marco Rubio, who is up for reelection this year, has co-sponsored Graham's bill, tweeting that "the extremists" on the issue are Democrats, like his opponent Rep. Val Demings, not Republicans.

Blake Masters, the GOP Senate nominee in Arizona, has faced scrutiny for his recent attempts to moderate his position on abortion since winning his primary last month. But this week, he leaned into his support for limiting abortion access.

"Of course, I support Lindsey Graham's 15-week bill, and I hope it passes," Masters said in a statement to CNN. "If it doesn't, I suggest and will introduce a third-trimester standalone bill."

Anti-abortion activists, besides supporting the bill on its merits, argue it benefits Republicans politically.

"I'm not saying don't talk about inflation, don't talk about the economy, but you also have to address the issue of the moment," said Mallory Carroll, a spokeswoman for Susan B. Anthony Pro-Life America, a political group whose president, Marjorie Dannenfelser, stood behind Graham this week while he introduced his bill. "Graham has given a gift to those that are running for reelection because this bill is a politically defensible position to take that also moves the ball forward for the pro-life movement and saves lives."

But plenty of Republican leaders do not see it that way.

Senate Minority Leader Mitch McConnell appears far from eager to follow Graham's lead on abortion, telling CNN's Manu Raju that "most of the members of my conference prefer that this be dealt with at the state level" and declining to offer public guidance to candidates on the issue.

"I think every Republican senator running this year in these contested races has an answer as to how they feel about the issue, and it may be different in different states," the Kentucky Republican said Tuesday. "So, I leave it up to our candidates who are quite capable of handling this issue to determine for them what their response is."

And when asked on Wednesday if a future Republican House majority would hold a vote on the Graham bill, GOP Whip Steve Scalise demurred and instead tried to focus on what he deemed extremism by Democrats.

"Well, first we need to see what our majority looks like," the Louisiana Republican said. "But I think if you've seen, we are a party that defends life, we stand up for life."

That reluctance from leadership has left Republican candidates largely on their own, following advice from party campaign committees presented after the court's decision was announced to try to put the focus back on Democrats' abortion policy -- primarily the reluctance by some candidates to be clear about what, if any, limits they support on the procedure.

A polling memo conducted for the Republican National Committee and released on Tuesday encouraged candidates to "put your opponent on defense and force them to answer for their extreme position."

And a presentation for candidates from the National Republican Senatorial Committee advises them to stick to the message that "your opponent is the extremist" and "you are the compassionate reasonable person."

"BUT, don't let campaign become about abortion -- get back to where the voters are -- inflation, gas prices, energy, crime, border security, etc.," reads the last slide of the presentation.

While securing the most politically sellable restrictions on abortion remains important to anti-abortion advocates, Republican operatives think that goal conflicts with their mission: Winning big at the ballot box.

"The party is more interested in making sure that it's a big Republican wave than a Republican ripple," said Ponnuru. "There's just a divergence of priorities."

Democrats double down on abortion

As Graham's plan was rolled out, Democratic campaign after campaign used it to push their opponents, underscoring how united Democrats are broadly on the issue while Republicans struggle with how to talk about it. The Graham bill also gave Democrats an opportunity to cry hypocrisy, given many Republican candidates had been saying the issue was better left to the states, not a federal bill.

"Don Bolduc and anti-choice Republicans are taking away your personal freedoms," says the ad's narrator.

Cheri Beasley, the Democratic nominee in North Carolina, accused Budd of being "so hell-bent on getting in between a woman and her doctor that he would ban abortion even in instances of rape, incest and threats to a woman's life." Budd called instances of rape or incest a "tragedy" in an interview with CBS earlier this year, but added, "Let's also realize there's a second life there" and "why would you want to take a second life for something that's already been harmed."

And Pennsylvania Lt. Gov. John Fetterman, the Democratic Senate nominee in the commonwealth, used Oz's lack of a firm answer on the Graham bill to ask: "Would you vote for Sen. Graham's bill to ban abortions after 15 weeks?"

"Dr. Oz and his team need to stop the spin and stop the bull****," Fetterman said in a statement. "This is a bill that he would actually have to vote on. Oz needs to tell us — yes or no, would you support this bill?"

CNN has reached out to multiple Oz aides for clarity on how he would vote on the Graham bill. None have responded.

The rapid fire reaction highlights how Democrats see the issue as a winner after effectively mobilizing around it in contests this summer.

Laphonza Butler, the president of Emily's List, an organization focused on electing Democratic women who support abortion rights, said Republicans "try to mislead voters about their agendas and hide their real records," but the Graham bill makes clear that their goal is to "end abortion."

"The path to stopping them and protecting our freedom is equally clear: we must keep and expand our majorities in Congress," she said.

The clearest way Democrats are leaning into the abortion debate is through the money they're spending. According to AdImpact data as of early September, campaigns and groups from both parties have combined to spend more than $84 million on over 350 unique ads about abortion since the court's decision, with nearly $66 million on more than 250 of the ads coming from Democratic campaigns or groups.

Republicans, by contrast, are putting little money behind the issue. According to AdImpact, the party's campaigns and committees have spent just under $11 million airing 81 ads about abortion.

CORRECTION: This story has been updated to correct the spelling of Fox News host Jesse Watters' last name.