He grew up in a sausage-loving country, but now advocates for plant-based diets to fight the climate crisis 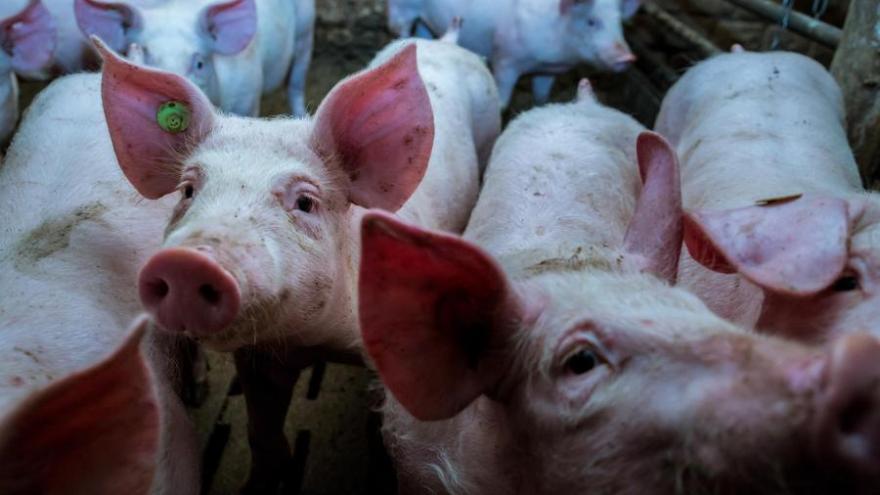 Pigs are pictured in a factory farm in Germany.

(CNN) -- Marco Springmann is from Germany's Ruhr region, a largely working-class area he likens to the American Rust Belt. His father made a living building generators for coal-fired power plants.

"It's a very practical, proletarian area that I'm from, and I guess, the diet that I grew up in was very much from the region," the University of Oxford researcher said. "Lots of sausages."

Germany happens to be one of the world's top consumers of sausages and produces more than 1.5 metric tons of it each year.

Springmann was studying to become a physicist when he began learning about the health concerns associated with meat. So, he began removing it from his diet. As he continued studying, he shifted to a completely plant-based diet. He also switched his area of research from physics to atmospheric science and climate change. At the crossroads of his two major interests -- health and climate — Springmann's research was showing how his plant-based diet lowered his carbon footprint.

"My initial thought was, 'If I know it's healthier and it's more environmentally sustainable (to not eat animal products), why wouldn't I do that?'"

With his meat-eating days over, he dug deeper into the correlation of diet and environment -- specifically, how eating less animal-based products could help slow the climate crisis. It's a topic he said did not get a lot of attention 15 to 20 years ago.

"At that time, most of the climate change research was really sort of on the production side -- power plants and how to reduce carbon dioxide emissions. The link between climate change, greenhouse gas emissions and the food system was really in the baby stage."

Springmann is now a Senior Researcher in Environment and Health at the University of Oxford's Environmental Change Institute. Based now in the UK, his research has been shared around the world about the "very little chance of avoiding dangerous levels of climate change" without a shift in eating habits toward more plant-based diets.

According to Springmann, if everyone adopted a plant-based diet by 2050 it would save about "eight gigatons of carbon dioxide equivalent emissions."

"The savings of 8 [gigatons] would be the second biggest emitter. That's after China's emissions, but a quarter more than the US's and double those of Europe."

One reason for this is that "beef is more than 100-times as emissions-intensive as legumes," according to Springmann in a 2019 CNN article.

Beside less greenhouse gas emissions, lower meat production would save energy, water and land use around the world. And eating less meat lowers risks of heart disease, obesity and other health problems.

But Springmann is not out to "steak shame" people, insisting he would never tell anyone to become vegan. "I include a plant-based scenario often in my research, but only amongst a plethora of other scenarios like flexitarian, pescatarian, vegetarian scenarios and so on."

So there's no need to get your stomach in a knot worrying about making big sweeping changes to your diet; you don't need to give up meat completely.

Springmann's own parents, still living in Germany, have gradually started cooking more plant-based meals, opening up their plates to new foods and experimenting in the kitchen.

"For Christmas last year, I tried to make a vegan Beef Wellington which was good fun," he said. "Everybody liked it, which was nice."

He's also beginning to notice an overall change in attitude and diets throughout his homeland.

According to a 2020 report from the German Federal Ministry of Food and Agriculture, 55% of those surveyed consider themselves flexitarian. He believes these dietary shifts are happening because many Germans are concerned about the climate crisis and are open to discussing what effects their own behaviors have on it.

"The discussion has really moved a lot and it has helped to talk about the scientific underpinnings of diets and climate change. Whereas in the States, it has become much more polarized."

Many Americans might have a hard time putting down their hamburgers for the climate crisis, but at the rate the world's population is growing, meat production won't be able to keep up. A 2019 World Resources Institute report found that "Americans will need to cut their average consumption of beef by about 40%" in order to keep with the food supply. But the good news is that it is now easier than ever to find meat alternatives and plant-based food almost anywhere you go.

Springmann hopes that the growing concerns around the climate crisis could one day unite us all in a global food movement because everyone will need to have a seat at the table in order to make a change.

"The many challenges we are facing, and will continue to face, can only be addressed if we manage to work together across divides, and I'm hopeful that we can do this."