He thought his late wife's precious ring was lost forever, but social media came to the rescue 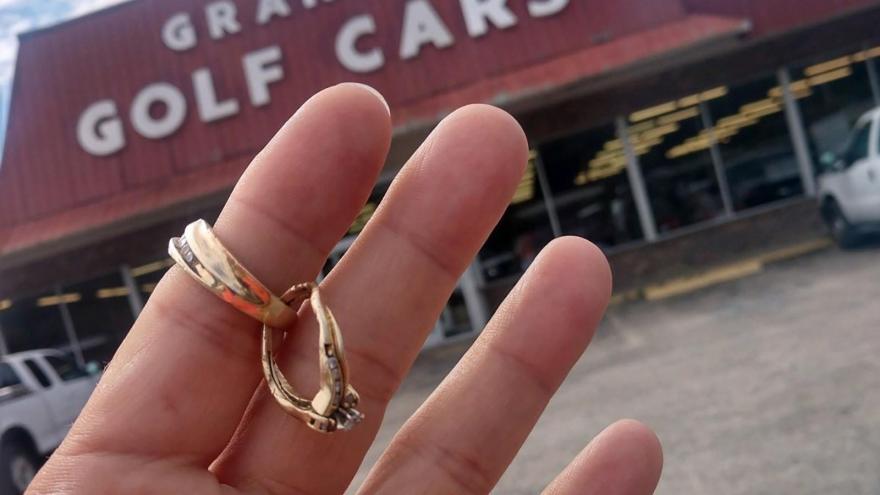 Patrick Waddell was overjoyed to have the wedding rings returned.

(CNN) -- Since his wife's death from colon cancer in 2016, Patrick Waddell of Harrisburg, North Carolina, has always carried their wedding rings with him.

He wore hers on his pinky, but when it kept getting caught on things, he had a jeweler intertwine the two -- together forever -- and wore them on a chain around his neck.

While on vacation last week, the precious rings were lost -- but the kindness of strangers saved the day.

Waddell, 43, and his two children went to visit his in-laws in North Myrtle Beach, South Carolina, as they've been doing for 13 years. He wanted to spend a day in South Myrtle to pick up a golf cart and decided to stay at the Ocean Lakes Family Campground.

Two hours after he got the golf cart, he realized that the rings were gone.

He searched for them but knew that he had to leave the next morning, so he did one of the only thing he could think to do: He posted it on Facebook and tagged the campground.

"It's just humbling to see so many people wanting to help you find something that means so much to you," Waddell told CNN.

A friend who worked at the campground got everyone involved in the search, and a few days later, he received a call from the golf cart store. Someone had spotted the rings in the parking lot but thought they were fake until they spotted the Facebook post.

Waddell was overjoyed, but he says he knows that his wife, Sheri, is in his heart, not in pieces of metal.

"God takes care of everything, and if they're meant to come back, they're gonna come back," he said. "That was just my attitude."

The rings look like a tractor-trailer ran over them several times, but that doesn't matter to Waddell; the point is that they're still together. And, he says, he's even glad that it happened because of "how many people this story has reached, to tell them that God is real."

The nicks in the rings remind him of everything a marriage is.

"The rings being damaged, that's what it reminds me of. Nothing's perfect. Nothing's ever perfect. Every flaw that you have, it makes up who you are. You can't just erase those flaws," he said. "It's just been a great story. It's so wonderful to talk about her again."