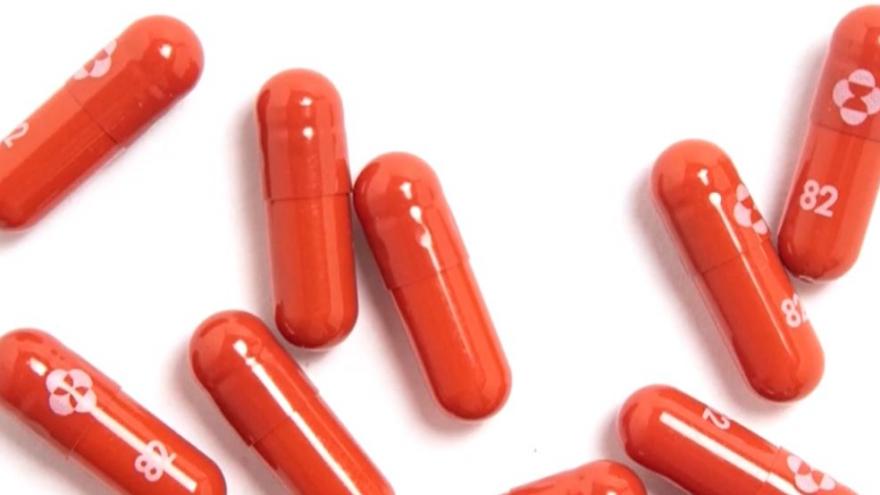 TORONTO, Ontario (CTV Network) -- Health Canada says it is working with international counterparts to review an experimental pill from drugmaker Merck, which the company reports can reduce hospitalizations and deaths by half in patients sick with COVID-19.

During a news briefing Friday, the Public Health Agency of Canada (PHAC) said Merck first submitted an approval request for molnupiravir, a twice-daily oral antiviral agent taken within five days after the onset of symptoms, as a potential treatment for COVID-19 on Aug. 13.

According to PHAC, the submission was accepted under the Minister of Health's Interim Order, which allows for the review of "early safety, quality and efficacy data" while later-stage clinical trials take place

Canada's chief medical adviser Dr. Supriya Sharma said review of the treatment is ongoing as more data from trials becomes available. Sharma said Health Canada will make an approval decision only when all necessary evidence has been submitted and reviewed.

"We are looking at it. We're going through … the data," she said.

Sharma said Health Canada has no specific time for completion of the review as it can take "months," but also that the pill will be evaluated and "held to the standards" as any other medication or treatment.

According to Health Canada, it only authorizes treatments, including those for COVID-19, following a "thorough scientific review of the safety, efficacy and quality data."

"A treatment must show evidence that it works well, is of high quality and is safe. The available data must demonstrate that the treatment’s benefits outweigh its risks," the agency said in a statement.

Canada currently has four approved treatments for COVID-19, including Canadian-made COVID-19 monoclonal antibody bamlanivimab and antiviral medication remdesivir. However, these treatments require an IV or injection.

If cleared, molnupiravir would be the first oral pill shown to treat COVID-19.

Merck and its partner Ridgeback Biotherapeutics announced Friday that early results from its trials show that patients who received molnupiravir within five days of COVID-19 symptoms had about half the rate of hospitalization and death as those who received a placebo.

The study tracked 775 adults with mild-to-moderate COVID-19 who were considered to be at higher risk for severe disease because of health problems such as obesity, diabetes or heart disease. Among patients taking molnupiravir, 7.3 per cent were either hospitalized or died at the end of 30 days, compared with 14.1 per cent of those who recieved the placebo.

The results were so strong that an independent group of medical experts monitoring the trial recommended stopping it early.

"It really takes what is the devastating disease and hopefully gives people confidence that it can be manageable," Merck CEO Robert Davis said in an interview with CTV News.

Davis called the pill a "game-changer" that could potentially be used to treat non-hospitalized, less severe cases of COVID-19 from home.

Earlier study results from Merck showed the drug did not benefit patients who were already hospitalized with severe disease. Experts say this is expected, given that antiviral drugs are most effective before the virus ramps up in the body.

The study results have not been reviewed by outside experts, which is the usual procedure for vetting new medical research.

Merck said it plans to submit the data in the coming days to health officials in the U.S. and other countries to authorize the pill's use.

A decision from the U.S. Food and Drug Administration could come within weeks after that, and be distributed soon after.

Similar to other antivirals, molnupiravir works by interfering with the virus's ability to copy its genetic code and reproduce itself, a process known as excessive mutagenesis or "error catastrophe."

Virologists out of the University of Alberta (U of A) tested the compound to see its mechanism of action, independently of Merck. Their findings were published in May in the Journal of Biological Chemistry.

Matthias Gotte, a professor of medical microbiology and immunology at the U of A, led the research and said in an interview with CTV News that the drug attacks the virus, but doesn't block or inhibit its replication.

Gotte said molnupiravir changes the viral genome, causing the replication engine of the virus to make "sloppy copies" of these altered genomes that are useless and not viable.

While Merck only studied its drug in people who were not vaccinated, Gotte said it may also potentially work in vaccinated patients who get less severe, breakthrough COVID-19 infections.

However, Gotte said it is important to note that molnupiravir is not a replacement for vaccines.

"The principles are completely different. Vaccines, they prevent severe disease, and the drugs are used to treat," he said. "Once you are infected, the big problem is with these antiviral drugs you can't use them late, you have to use them as early as possible."

Eleanor Fish, a senior immunologist with the Toronto-based University Health Network who is not affiliated with the U of A study or Merck, says the approval of molnupiravir would help those who are ineligible for vaccination as well as those most at risk of severe disease.

"We can jump up and down in the U.S. and Canada and say, 'Hey, we've got another tool in our armoury,' [and] that's going to be great," Fish told CTV News.

She added that the drug's approval in other parts of the world will help countries that are struggling to acquire COVID-19 vaccines.

"I see this more as [an] incredible opportunity, with a limited number of vaccines available globally, to send this out to those jurisdictions where vaccination rates are very, very low," she said.

Please note: This content carries a strict local market embargo. If you share the same market as the contributor of this article, you may not use it on any platform.