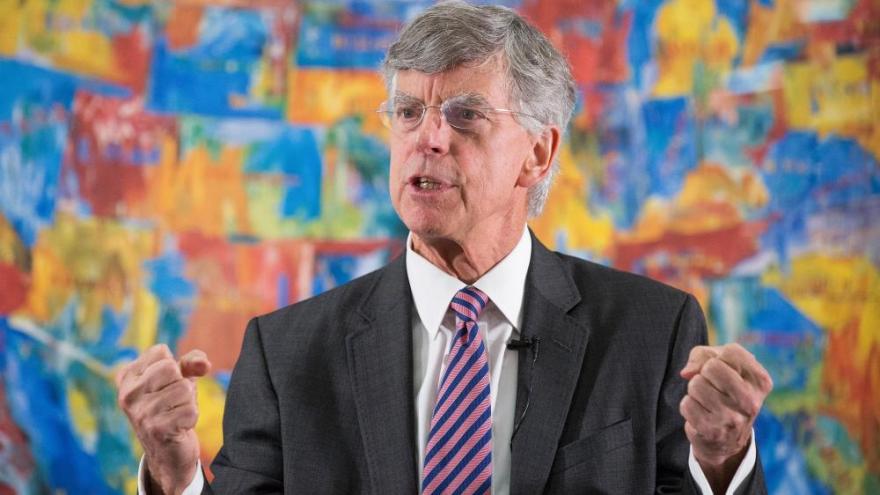 Charge d'affaires at the U.S. Embassy in Ukraine William Taylor speaks to the media during the briefing, in Kiev, Ukraine.

(CNN) -- The House's impeachment inquiry is in full swing this week and investigators have several high-profile individuals from across the State Department, Pentagon and the Office of Management and Budget whom they plan to interview in closed-door depositions -- though when those depositions will happen remains in flux.

While the list of depositions started this week at seven, it was down to just two by Monday afternoon, though a third was rescheduled by Monday night. Only US embassy in Ukraine's charge d'affaires William Taylor and Deputy Assistant Secretary of Defense Laura Cooper remained on the schedule provided by an official working on the impeachment inquiry. The official cited memorial arrangements for the late Rep. Elijah Cummings, the chairman of the House Oversight Committee who died last week, for canceling previously scheduled depositions for Thursday and Friday.

A source familiar said Monday night that the deposition of acting Assistant Secretary for European and Eurasian Affairs Philip Reeker had been rescheduled for Saturday.

That followed acting OMB Director Russ Vought tweeting Monday morning that neither he nor associate director Michael Duffey would comply with the depositions requests. It's not clear at this time why other depositions scheduled for earlier in the week were postponed.

Here's who is on the agenda and who had their depositions postponed until further notice:

Ambassador William 'Bill' Taylor, the US embassy in Ukraine's charge d'affaires and top US diplomat in the country

Taylor, who is acting as the de facto US ambassador in Ukraine since the departure of Marie Yovanovitch, was thrust into the public eye following the release of his text exchanges with former Special Envoy for Ukraine Kurt Volker and US ambassador to the European Union Gordon Sondland, both of whom have spoken to House impeachment investigators in recent weeks (as has Yovanovitch). In the exchanges, Taylor expressed his concerns about foreign policy moves being tied to political motives, writing that it was "crazy to withhold security assistance for help with a political campaign."

Cooper's purview as deputy assistant secretary includes Russia, Ukraine and Eurasia. Lawmakers are likely to ask Cooper about the decision to freeze aid to Ukraine over the objections of the Pentagon.

Reeker, a career foreign service officer, was among the career state officials who undertook a concerted effort to shield then-ambassador Yovanovitch from conspiracies peddled by conservative media outlets beginning in March. Reeker, along with State Department official George Kent, sought to provide counselor Ulrich Brechbuhl and Undersecretary for Political Affairs David Hale with facts to counter the conspiratorial narratives being pushed about the career diplomat.

These individuals have been previously scheduled to testify, but the depositions have delayed.

Morrison replaced Fiona Hill on the National Security Council following her departure from the Trump administration over the summer. Morrison was on the July 25 Trump call with Ukrainian President Volodymyr Zelensky.

Jayanti, a State Department official and career foreign service officer, was stationed in the Ukrainian capital of Kiev. CNN reported that she received a memo in April from an American businessman who was worried about the activities of two Soviet-born allies of Trump's personal attorney Rudy Giuliani who sought dirt on the Bidens.

Officials have told CNN that standard operating procedure suggests Vindman would also have been listening in to the July 25 phone call between Trump and Zelensky, though that's yet to be confirmed independently.