He flew to India to see his parents sick with Covid. Now, this Arizona man is unable to get back to his pregnant wife 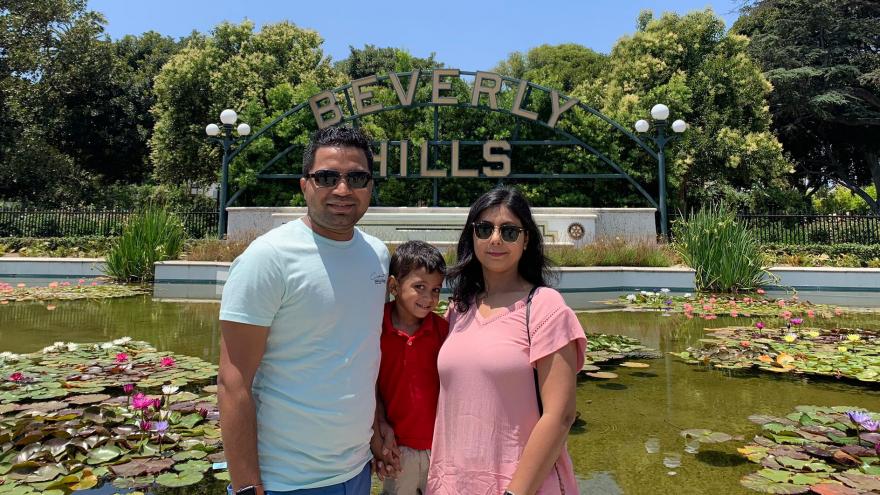 Pallav Jha, his wife, Shilpa Jha and their son are pictured together. At the end of April, both of Pallav Jha's parents contracted Covid-19 in India.

(CNN) -- At the end of April, both of Pallav Jha's parents contracted Covid-19 in India. When his mom called to deliver the news of his dad's declining health, Jha knew he had be with them, which meant leaving his pregnant wife and 4-year-old son behind in Arizona.

"I am whatever I am today just because of them," Jha said. "I'm glad that I could come here (India) to see my dad take his last breath but it's a very emotional situation," he said.

Jha's 59-year-old father was hospitalized on April 24, and Jha arrived in Udaipur, Rajasthan, two days later. His 58-year-old mother received home treatment and recovered, but unfortunately, his father lost his battle with Covid-19 on May 4.

India is currently experiencing a second wave of the coronavirus, and the total death toll has crossed the 350,000 mark. India has 33.3 million Covid-19 cases, the second-highest number after the United States and ahead of Brazil, which has the third-highest number at 16.9 million cases, according to Johns Hopkins University.

Jha's wife, Shilpa, and their son did not travel with him to avoid any pregnancy complications.

"Here I am 8 months pregnant and on a high-risk pregnancy with gestational diabetes and due next month," Shilpa told CNN. "Also I have a 4-year-old boy to take care (of). At this stage, I need my husband now. I have been managing everything without him since more than a month but now it's impossible for me to manage alone."

After performing the last rites for his father, Jha said reality sunk in -- how he would manage to return to Gilbert, Arizona.

Before Jha can return home, he needs to get his passport reviewed and stamped at a US Consulate in India. He is an H-1B employment visa holder working for PayPal as a senior project leader.

Because of tightening Covid-19 restrictions that forced closures of US embassies and consulates in India, Jha was given an appointment in September -- almost three months away. He tried to file an emergency request but the US Embassy in India denied it without a clear reason, despite providing Shilpa's medical records and his employment documentation, he said.

In an email to Jha, the US Embassy and Consulate in Delhi said, "your request for permission to schedule an emergency appointment has been reviewed. We regret to inform you that your request has been denied."

"I knew I had to renew my visa but when I flew from there (the US) everything was business as usual with the embassies and everything was operational," he said. "I thought it might take a few weeks as it usually does but I didn't expect that they would decide to close and suspend operations."

And Jha isn't the only one who is stuck or has been stuck in India because of the tightening travel restrictions.

Ashu Mahajan, from New Jersey, was told he wouldn't be able to get a visa appointment until February 2022 after traveling to India to be by his dying father's side. But with the help of New Jersey Sen. Bob Menendez, Mahajan was reunited with his family at the end of May.

Shilpa said that due to complications with her pregnancy, she is at risk of premature delivery in the next 2-3 weeks, but she can't imagine going into labor without her husband by her side.

PayPal says they are supporting Jha throughout the process.

"My employer has supported me in terms of getting time off and shipping all the necessary visa documents from there so I have all of those documents in my hand, he said.

Desperate for a solution, the Jhas reached out to both Arizona Sen. Kyrsten Sinema and Sen. Mark Kelly.

A spokersperson for Sinema said, "Our office is communicating with the embassy on behalf of the Jha family and working to find a swift solution."

Sen. Kelly's team also told CNN they are in contact with the family.