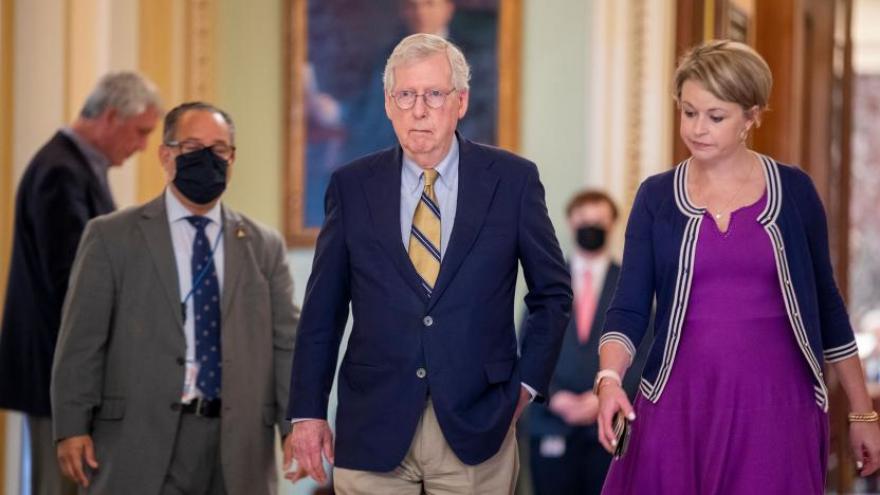 Senate Majority Leader Chuck Schumer and Senate Minority Leader Mitch McConnell have reached an agreement to create a one-time process that would let Democrats raise the debt ceiling on their votes alone, a deal that underscores the lengths the GOP leader will go to avoid a damaging default without Republican support to increase the national borrowing limit.

(CNN) -- Senate Majority Leader Chuck Schumer and Senate Minority Leader Mitch McConnell have reached an agreement to create a one-time process that would let Democrats raise the debt ceiling on their votes alone, a deal that underscores the lengths the GOP leader will go to avoid a damaging default without Republican support to increase the national borrowing limit.

The House took the first step to implement the plan on Tuesday by voting to pass new legislation that will set up the debt limit process. The final vote was 222-212. GOP Rep. Adam Kinzinger of Illinois was the only Republican to join Democrats in voting for the bill.

The measure will now need to be taken up by the Senate.

The new legislation, if advanced with 60 votes in the Senate, would create a temporary fast-track process to allow Senate Democrats to act on their own to increase the debt limit with 51 votes. The legislation outlines that Congress would have to specify the exact dollar amount of a new national debt limit -- likely north of $30 trillion. The fast-track process would expire after January 15.

Treasury Secretary Janet Yellen has warned the debt limit could be reached on December 15 -- otherwise the US would suffer financial catastrophe and endure its first-ever default.

The legislative gymnastics to avoid a default underscore how Republicans in particular are eager to avoid both an economic calamity and the backlash for casting a politically toxic vote of raising the borrowing limit.

Since 60 votes are needed to break a filibuster in the 50-50 Senate, 10 GOP votes ultimately are needed to advance any new legislation. McConnell believes that Republicans would be more willing to vote to create a new process on the debt ceiling, rather than raise the debt limit itself, but he's facing pushback from some of his colleagues who believe he's giving in too quickly to Democrats.

"I don't think there will be 10 Republican votes to allow the Democrats to raise the debt ceiling," said GOP Sen. Lindsey Graham of South Carolina.

McConnell's deal-making amounts to a sharp shift from his posture in the last standoff, when he insisted that Democrats raise the debt ceiling by using the time-consuming budget reconciliation process. After Democrats refused, the GOP leader ultimately proposed a short-term deal to raise the borrowing limit for about two months and later informed President Joe Biden he wouldn't be getting Republican cooperation in the next standoff.

But with Republican fortunes on the rise in the 2022 midterms, the wily GOP leader is far more eager to litigate the Biden agenda than potentially provoke a default that could cause a voter revolt at the polls.

While the new process would be quicker than the use of reconciliation, it still sets up a complex multi-step effort.

The new legislation, which will be taken up by the House first, will be folded into a more popular bill to prevent cuts to Medicare -- making the fast-track process bill easier to swallow.

The new process would ensure the debt ceiling legislation cannot be amended and would be immediately considered by the Senate. Debate would be limited to 10 hours. Once approved, the debt limit hike would be sent to the House.

McConnell predicted on Tuesday that there will be enough GOP support to pass the bill in the Senate.

"I'm confident this particular procedure coupled with the avoidance of Medicare cuts will achieve enough Republican support to clear the 60-vote threshold," he said.

McConnell also pushed back on the idea that by brokering a debt limit deal to stave off default with Democrats he has reversed his earlier position of saying that Republicans would not help Democrats deal with the issue.

"The red line is intact. The red line is that you have a simple majority, party-line vote on the debt ceiling. That's exactly where we will end up," he said.

McConnell briefed his caucus behind closed doors about the deal he cut with Democrats. As he was defending the approach as necessary to stave off default while forcing Democrats to "own" the debt ceiling hike, the Senate GOP leader faced criticism in particular over the precedent the plan would set to create a special process to raise the borrowing limit, according to senators who attended the lunch. Moreover, there was criticism that the plan will be folded into a bill to stave off automatic cuts to Medicare, so voting against the plan could be characterized as a vote to impose steep cuts to the popular entitlement program.

"There's a lot of concern ... that 'no' is a bad vote and 'yes' is a bad vote," said Republican Sen. Kevin Cramer of North Dakota.

Cramer said he told the leader that "it's better to have a plan 40 Republicans vote for" such as a debt ceiling hike than to "marginalize" 10 GOP senators who are forced to advance the bill.

Cramer added: "I mean, 'no' is the easiest explanation for everything. And a lot of people explain 'no' really well, really convincingly. But it doesn't raise the debt ceiling."

But key Senate Republicans signaled Tuesday they would support the proposal, backed by McConnell, to create an expedited legislative process by which Democrats could raise the debt ceiling without GOP votes.

McConnell briefed his leadership team in the Capitol at noon and several emerged saying they would likely back the deal, even after some had expressed reluctance to the emerging idea on Monday.

They pointed to the plan's inclusion of three of their top priorities on the issue: It would require Democrats to approve a specific dollar amount increase on their own, it would allow fast consideration on the floor, and it would prevent a damaging default.

Republican Whip John Thune of South Dakota signaled he backs the approach and argued it would ensure Democrats have to "own this massive increase in the debt that's going to accommodate all the new spending they want to do."

"The majority party has to deliver the votes to raise the debt and the Democrats know that and they're willing to do it," Thune said. "They want to own this massive increase in the debt that's going to accommodate all the new spending they want to do and ... we think that's a perfectly appropriate way to handle this."

Sen. Roy Blunt, a Republican of Missouri, who was also skeptical of the proposal on Monday indicated he would likely vote for the plan.

"We'll see what the members say, I would expect to be able to be for it," he said.

Blunt said he was thought it was smart to move the debt measure off the National Defense Authorization Act, where leaders initially planned to attach it, because Republicans who want to back the defense bill might have voted "no" because it included the debt language.

One member of GOP leadership appeared more skeptical of the proposal, a view that may be shared by many rank-and-file Republicans.

Asked if she would back the idea, Sen. Joni Ernst, a Republican of Iowa said: "We'll see. We'll see what happens."

GOP Sen. Mike Crapo of Idaho said that he has "concerns" about the debt limit plan, but would not detail what they are or say how he would vote.

Republican Sen. Ted Cruz of Texas criticized the plan as a "gimmick."

"They've cooked up this new gimmick to try to force it through, but at the end of the day Democrats have the legal authority to raise the debt limit using reconciliation," he told CNN as he left a closed Republican meeting where McConnell unveiled the proposal. "They can do it with only Democratic votes but they are continue to try to engage in political games to try to maneuver Republicans into voting for the debt they've been racking up."

Asked if it was a mistake for McConnell to cut the deal, Cruz said: "I don't think we should be playing procedural games." He added that "Democrats have the ability to raise the debt ceiling" and "they ought to do it without Republican participation."