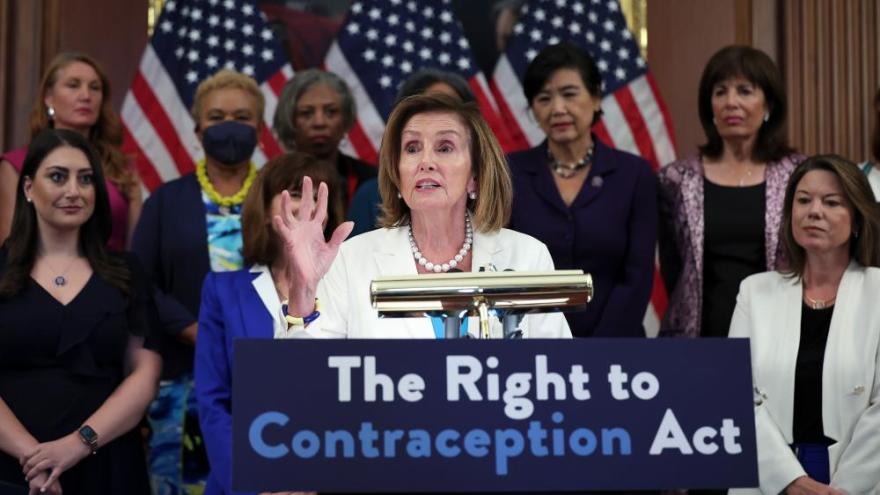 House Speaker Nancy Pelosi speaks during an event on Capitol Hill earlier this week in Washington, DC. The House is expected to vote on July 21 on a bill that would guarantee access to contraception.

(CNN) -- The House voted Thursday to pass a bill that would guarantee access to contraception by protecting the right to buy and use contraceptives without government restriction.

Eight Republicans crossed over to vote with Democrats. Reps. Liz Cheney of Wyoming, Nancy Mace of South Carolina, Fred Upton of Michigan, Anthony Gonzalez of Ohio, John Katko of New York, Brian Fitzpatrick of Pennsylvania, Maria Salazar of Florida and Adam Kinzinger of Illinois joined all the Democrats in voting for the bill. Two Republicans, Reps. Bob Gibbs of Ohio and Mike Kelly of Pennsylvania, voted present, meaning they took no position either way on the bill

The vote falls among action House Democrats are trying to take following the Supreme Court's decision that overturned Roe v. Wade. In that decision, Justice Clarence Thomas wrote separately in a concurring opinion that the high court should reconsider "substantive due process precedents" in decisions, including Griswold v. Connecticut, that allows access to contraception.

The White House said it "strongly supports" the bill in a statement Monday, adding "access to contraception is essential to ensuring all people have control over personal decisions about their own health, lives, and families."

Earlier this week, the House passed a bill that would enshrine protections for same-sex marriage into federal law, with 47 Republicans joining Democrats voting in favor of the bill. It is unclear whether the bill can pass the Senate where at least 10 Republicans are needed to side with Democrats to overcome the filibuster's 60-vote threshold.

This story and headline have been updated with additional developments Thursday.