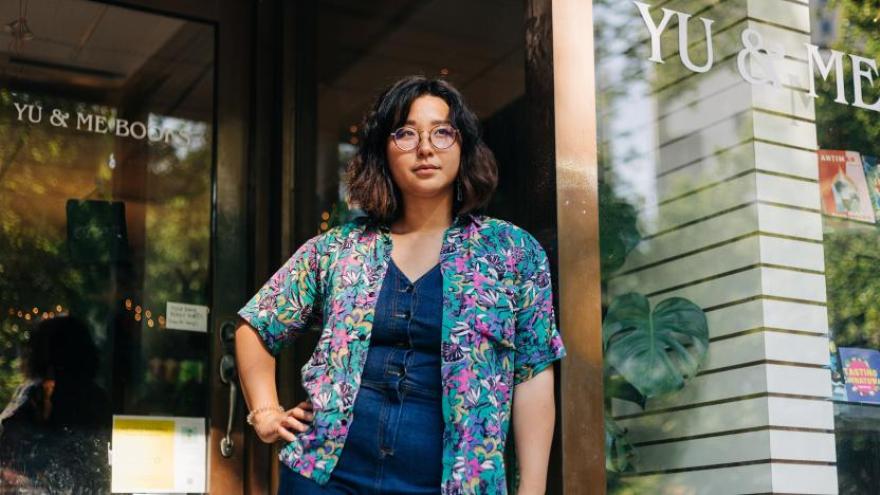 Lucy Yu outside her store, Yu and Me Books, in Manhattan's Chinatown.

An only child raised by a Chinese immigrant mother in west Los Angeles, she spent a lot of time in bookstores. But it seemed that the stories she connected to most -- those written by immigrants and people of color -- were often relegated to a single shelf or a heritage month display.

"I just wanted to walk into a place where I didn't have to search that much," she said.

Yu, a chemical engineer by training, started researching and found an abundance of titles going back decades from authors with names or backgrounds like hers. But she said many of those books had quickly been placed on the backlist, a publishing term referring to older books that are still in print but typically aren't being actively promoted.

Yu launched a crowdfunding campaign last year to turn her vision into reality, and hit her goal in just a few weeks, affirming that she wasn't alone in wanting more of these books. In December, Yu and Me Books opened its doors in Manhattan's Chinatown, and has been steadily growing since. The store now has four staff members, including Yu.

The bookstore has also become a literary and community hub. Yu and Me Books has hosted conversations with immigrant authors, a pop-up book workshop and clothing swaps. And as Asian Americans in New York, including Chinatown, faced attacks against their communities, the store partnered with the nonprofit Soar Over Hate to hand out free pepper spray and personal safety devices.

Despite this, Yu didn't set out to open an Asian American bookstore.

When she first conceived of her small business, she dreamed of a space that would reflect the rich diversity of her community. She envisioned a place dedicated to stories written by immigrants and people of color -- which happened to include Asian American authors.

"It's been really interesting seeing how I've kind of been pushed into the Asian American bookstores lane," she said. "I think that if I weren't Asian American, I may not have had to put myself within that slot."

That feeling of being pigeonholed is familiar for many Asian Americans, whether they work in media, the restaurant industry or the literary scene like Yu. For so long, Asian American representation in creative sectors has been scarce, while Asian American depictions in popular culture have been replete with tired tropes and stereotypes. So when Yu launched her community-centered bookstore last year, it came with added pressure and expectations.

While Yu has held to her mission of highlighting stories of immigrants and people of color more broadly, she's leaned into customers' demand for books by Asian American authors. Most of her inventory now skews toward Asian American books, she said -- making Yu and Me Books a rare and special place.

"As someone who's thinking about my own identity and also a business owner, I want to be able to support whoever wants to come in and find books that represent themselves," she said. "But I love that there is a lot of love and desire for Asian American books and representation."

Still, Yu makes it a point to both challenge and delight visitors to her store.

Her shelves include bestsellers such as Min Jin Lee's "Pachinko" and Michelle Zauner's "Crying in H Mart," as well as niche titles from smaller presses. Visitors can thumb through cookbooks, romance novels, young adult novels and poetry volumes by Asian American authors -- and the selection keeps growing. For a couple hours most evenings, a glass of wine in hand, Yu researches what other books she doesn't yet know about that she might acquire.

"One of my favorite things that I hear when customers come in the store (is), 'I've never heard of this title before' or 'I've never seen like 40% of this inventory before.'" Yu said. "That makes me so happy because you can connect to a story that's not necessarily being pushed by publishers."

As Yu and Me Books celebrates and showcases the breadth of works that Asian American writers have produced over decades, Yu also encourages her visitors to keep an open mind.

"I also try to remind readers as much as I can that outside the Asian American experience, there's so many books written by other immigrants that we can relate to very much," she added.

In the time that Yu and Me Books has been open, Yu said she's seen positive changes in the publishing industry. She's seeing more diversity in the authors who are getting published, but those authors are often called upon to be "educators of our experience," Yu said. As exciting as it is to see these experiences represented authentically, she hopes the industry will reach a point where authors can transcend their identities.

"I want authors of color to just write about unicorns or cupcakes -- whatever they want to write about," she added.