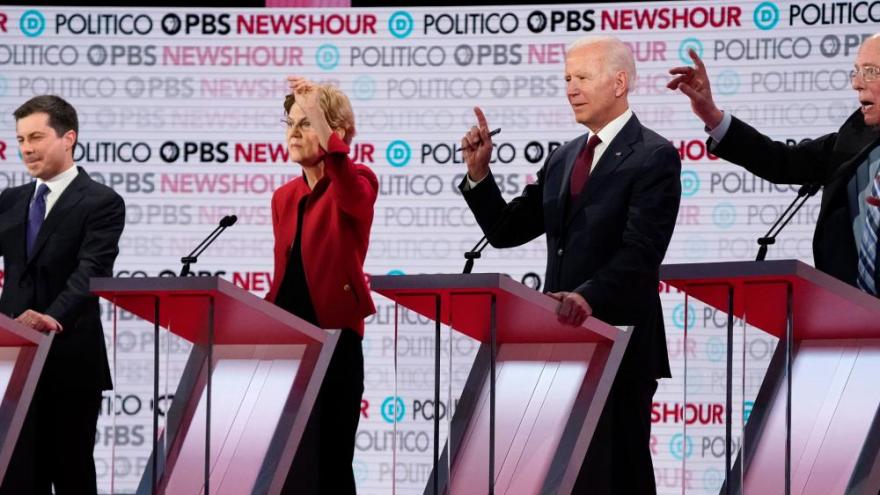 (CNN) -- Six presidential candidates will face off Tuesday night at the last Democratic debate before the first votes are cast in the 2020 election.

CNN, in partnership with The Des Moines Register, is hosting the seventh primary debate at Drake University in Des Moines, Iowa.

The debate is the first meeting of the candidates since Iran fired more than a dozen ballistic missiles at two Iraqi military bases housing US troops. The attack last week was retaliation after Iran's top general Qasem Soleimani was killed in a US airstrike in Baghdad. The debate will provide an opportunity for the candidates to focus on foreign policy as they make their presidential case to the American people.

What time is the debate?

How can I watch it?

The debate will air exclusively on CNN, CNN en Español, CNN International and CNN Airport Network and will stream live in its entirety, without requiring log-in to a cable provider, exclusively to CNN.com's homepage, across mobile devices via CNN's apps for iOS and Android, and via CNNgo apps for Apple TV, Roku, Amazon Fire, Chromecast and Android TV. The debate will also air live at DesMoinesRegister.com and Democrats.org, and can be heard on CNN's SiriusXM XChannels and the Westwood One Radio Network.

Who didn't make the cut?

How was the stage decided?

What happened at the last debate?

The last Democratic presidential debate in December took place in California, but it was all about Iowa. Buttigieg, Klobuchar and Warren are banking on a strong performance there on the path to the nomination.

Buttigieg faced the kind of sustained criticism he had largely avoided during his rise to the top of the polls in Iowa. Warren and Buttigieg had been circling each other for weeks leading up to the debate. Warren highlighted a recent Napa Valley fundraiser Buttigieg held in a "wine cave," where the mayor talked to donors under a chandelier with 1,500 Swarovski crystals. Buttigieg responded by pointing out that Warren had held high-dollar fundraisers as a Senate candidate, and that her decision to no longer do so is a new one.

After a series of unsteady debates, Biden was the most comfortable that he's been on the debate stage to date, a sign of renewed confidence in his status at the top of the Democratic pack nationally -- and that the smaller debate stage suits him.

Yang also proved he belonged on the stage -- particularly because of his ability to cut through politics and policy in humanizing terms. This was clearest when he was asked about being the only person of color on the stage, something that happened after New Jersey Sen. Cory Booker and former Housing and Urban Development Secretary Julián Castro failed to qualify for the debate and California Sen. Kamala Harris dropped out of the race.

He said: "It's both an honor and disappointment to be the lone candidate of color on the stage tonight."