Hurricane Ian strengthens to Category 2 storm and could be 'something that we haven't seen in our lifetime,' Tampa forecaster says 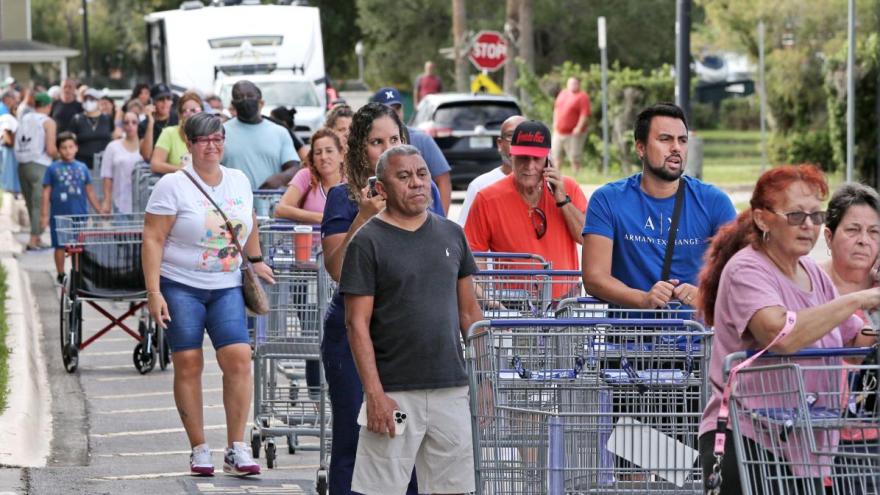 Shoppers wait in line on September 25 as people rush to prepare for Hurricane Ian in Kissimmee, Florida.

(CNN) -- Hurricane Ian keeps getting stronger as it barrels toward Florida, prompting urgent evacuations and threatening dangerous storm surges in places not used to getting hit directly by a hurricane.

Ian is now a Category 2 hurricane on the Saffir-Simpson wind scale, according to a 5 p.m. ET update from the Miami-based National Hurricane Center. The eye of the storm is located around 150 miles southeast of the western tip of Cuba and Ian is moving north-northwest near 13 mph, the center said.

The hurricane center's forecast for Ian "has shown an unprecedented rate of strengthening from a tropical storm to powerful hurricane," CNN meteorologist Brandon Miller said.

Ian's winds intensified from 85 mph Monday afternoon to 100 mph at 5 p.m. ET. Forecasters expect Ian to become a major hurricane before it lashes the US, with winds reaching 111 mph or greater.

Conditions in western Cuba are expected to deteriorate this evening and through the night, with "significant wind and storm surge impacts expected," the hurricane center said. Ian will likely be a Category 3 with winds of 120 mph or greater when it moves over Cuba Tuesday morning, forecasters say, and it's also expected to produce flash flooding and possible mudslides in parts of Jamaica and Cuba.

A total of 19,283 people have been evacuated from their homes in the Western Cuban province of Pinar del Río, according to the state news channel TelePinar.

"Storm surge could raise water levels by as much as 9 to 14 feet above normal tide levels along the coast of western Cuba in areas of onshore winds in the hurricane warning area tonight and early Tuesday," the center said.

In the US, more than 15 million people are expected to suffer at least tropical storm-force winds in cities including Tampa, Orlando, Tallahassee and Jacksonville, Miller said.

A storm surge warning has been added for portions of western Florida with 5 to 10 feet of surge possible, according to the latest advisory. The warning of "life-threatening inundation" stretches from Anclote River southward to Flamingo and includes Tampa Bay.

The hurricane watch from Englewood to the Anclote River, including Tampa Bay, has been upgraded to a hurricane warning, according to the latest advisory from the hurricane center. This means "hurricane conditions are expected somewhere within the warning area, in this case, within 24 to 36 hours," the center said.

Florida Gov. Ron DeSantis said in a statement Monday that tropical storm-force winds may begin as soon as Monday night in the Florida Keys and south Florida. "Storm surge has the potential to impact much of Florida's west coast, with the highest risk from Ft. Myers to the Tampa Bay region," the statement read.

'The storm of a lifetime' for Tampa Bay

While projection models show a wide range of possible paths, one fear is evident: The Tampa area, on the western side of Florida, could get its first direct hit from a hurricane since 1921. And that could be devastating.

"The last major hurricane that actually made a direct hit was 100 years ago," said meteorologist Rick Davis of the National Weather Service's Tampa office. "So there's a lot of people that have been brushed by hurricanes in the last five or 10 years in Florida."

Davis added: "We tell people even if they're lifelong Floridians like myself, this is something that we haven't seen in our lifetime... So we definitely need to take it seriously."

But the area doesn't need a direct hit to see catastrophic damage from flooding. Tampa Bay is extremely vulnerable to storm surge because water being pushed into it has nowhere to go.

The current forecast track for Hurricane Ian puts all of the Tampa Bay region -- Tampa, St. Petersburg, Clearwater, Bradenton and others -- on the right side of the storm, which would see winds push water northward into the bay, maximizing the inundation from storm surge. The current storm surge forecast for this area is up to 10 feet.

The center of the storm tracks within 10 miles of the St. Petersburg coastline in Pinellas County, near Clearwater, while also slowing the storm down to a walking pace between 3 to 4 mph on Thursday as it makes its closest pass.

The combination of mammoth storm surges and a stubborn, slow-moving hurricane could be disastrous for Pinellas County, officials there said.

"It could potentially sit on top of us for 47 hours," said Cathie Perkins, Pinellas County emergency management director. Officials are expecting 10 to 15 inches of rain, Perkins said.

Jamie Rhome, the National Hurricane Center acting director, told CNN Monday that Ian "would be the storm of a lifetime for many Tampa Bay residents."

'If you can leave, just leave now'

On Florida's west coast, officials urged residents to flee instead of staying to protect their property.

"This is nothing to mess around with. If you can leave, just leave now," Tampa Mayor Jane Castor said Monday. "You certainly could replace personal possessions. You can't bring anyone back to life."

Castor said 49 shelters are open, including some accepting pets and others accommodating residents with special needs.

"We're not trying to instill fear," Castor said. "We're just asking everyone to be responsible, to be cognitive of what this storm can bring us."

In Pinellas, mandatory orders for Zones B and C will go into effect Tuesday morning, a tweet from the county read.

"When we issued that mandatory evacuation, what that means is if you don't and you call for help, we're not coming because we're not going to put our people in harm's way and put them in peril because you didn't listen to what we told you to do," said Pinellas County Sheriff Bob Gualtieri.

Gualtieri added that officials would not be knocking on doors to evacuate people. "You need to do it and if you don't do it, you're on your own. Please don't put yourselves in that situation," Gualtieri said.

Evacuation orders also went into effect for low-lying areas in Charlotte County as well as the counties of Sarasota, Hernando and Manatee.

MacDill Air Force Base issued an installation-wide mandatory evacuation by noon Tuesday for "non-mission essential individuals, including uniformed service members" and dependents, MacDill tweeted Monday. The base has about 6,000 military and civilian personnel, its website says.

Airports and ports are beginning to prep for the storm as well. The last flight scheduled out of St. Pete-Clearwater International Airport is scheduled to leave at 11:22 a.m. Tuesday, and at 1 p.m. the airport terminal building will close due to Pinellas County evacuation mandates. It will remain closed until the mandatory evacuation has been lifted for Zone A, at a minimum.

Other airports in Florida are continuing to monitor Hurricane Ian, but have not announced closures.

Nine flights were canceled out of Miami International Airport Monday ahead of the storm, according to airport spokesperson Jack Varela.

Storm surges can be deadlier than winds, forecasters warn

While Ian is forecast to become a "major hurricane" based on wind speeds, storm surges can be even deadlier than the winds, said Michael Brennan, acting deputy director of the National Oceanic and Atmospheric Administration.

"Water -- and potentially storm surges, in particular -- is the hazard that has the potential to kill the most people in a hurricane -- especially along the Florida west coast," Brennan said Monday, adding that the region could see between 5 to 8 feet of inundation.

And forecasters predict parts of Florida will see the following dangerous storm surges:

Anclote River to Englewood, Florida, including Tampa Bay: 5 to 8 feet

Englewood to Bonita Beach, Florida, including Charlotte Harbor: 4 to 7 feet

Florida Keys including the Dry Tortugas: 2 to 4 feet

"Substantial rainfall over the past couple months has already increased river flows and filled area lakes" in Central Florida, according to the Southwest Florida Water Management District. "Heavy rainfall is expected Wednesday and Thursday of this week, and storm surge along the coast could be devastating."

On top of the ferocious winds, heavy rain and dangerous storm surges, "A few tornadoes are possible late Monday night and Tuesday across the Florida Keys and the southern and central Florida Peninsula," the hurricane center said.

Virtually every Floridian will be affected by Hurricane Ian, the director of Florida's division of emergency management said Sunday.

Pinellas County spokesperson David Connor told CNN's Alisyn Camerota Monday what worries him most is people underestimating the size of the storm.

"One thing that's easy to be misled by when looking at forecasts from the National Hurricane Center is how small that cone is compared to the real thing," Connor said. "This storm is more than 300 miles wide. I mean, that's the distance from our county to Mobile, Alabama."

"Make preparations now," DeSantis said Sunday. "The things that you should be prepared with are things like food, water, batteries, medicine, fuel."

The governor also warned of power outages as well as possible evacuations and fuel shortages.

Florida Power and Light has activated its emergency response plan, mobilizing 13,000 power restoration personnel in preparation for Hurricane Ian, the company said in a news release.

Cities and counties throughout the state are also preparing.

Officials in Cape Coral, a city in southwest Florida known for its many canals, were particularly concerned about storm surge and winds. "We're preparing for the worst; hoping for the best," Cape Coral mayor John Gunter told CNN.

And in neighboring Georgia, Gov. Brian Kemp ordered the activation of the State Operations Center on Monday "to prepare for any potential impact from Tropical Storm Ian later in the week."

The HCA Florida Pasadena Hospital in St. Petersburg announced on their website that they have suspended service and transferred patients ahead of the hurricane.

Hillsborough County parks and preserves have been closed since Sunday, all Pasco County parks will close at noon on Tuesday and Dry Tortugas National Park?in Key West temporarily closed to prepare for the storm.

Colleges and universities across the state's storm zone area -- like Bethune-Cookman University in Daytona Beach and University of South Florida in Tampa -- announced they were either evacuating campus, closing campus for the week, canceling classes Monday and Tuesday or moving classes online.

On the K-12 level, Hillsborough County Schools said it had "no choice" but to cancel classes as campuses morphed into storm shelters. Schools in the Hillsborough district will close through Thursday, the district tweeted Sunday.