'I wish that more people knew more about him': What we know about the UVA shooting victims 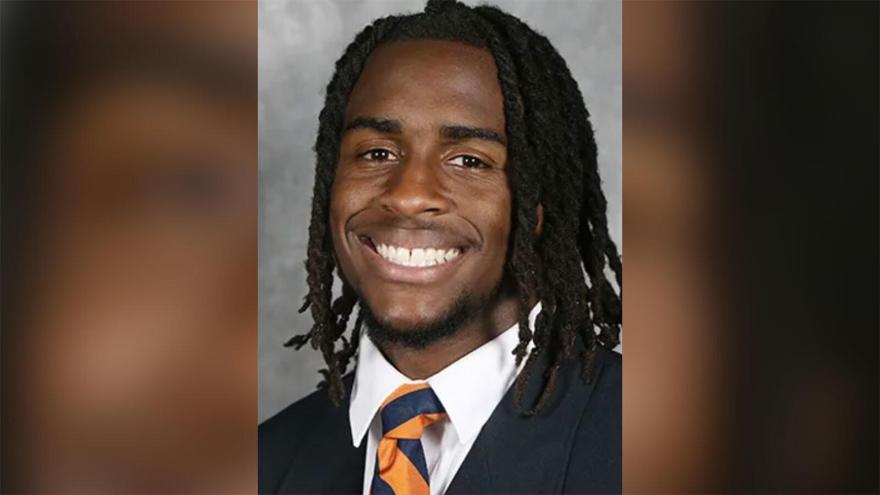 Devin Chandler was not only a great football player, but a “big kid” who loved to smile, sing and dance, UVA head football coach Tony Elliott said Tuesday.

(CNN) -- Devin Chandler was a gifted football player who was always smiling and trying to make sure those around him were happy, his former football coach Adam Sykes said in a statement.

Chandler was one of three football players from the University of Virginia who were killed in a shooting late Sunday as a bus returned to the school's main campus in Charlottesville from a field trip, school officials said.

"(Chandler) was one of the happiest young men I ever had the privilege of knowing," Sykes said. "He was always smiling, and you saw him with every kind of group in the school. He just wanted to make those around him as happy as he was."

"This is an unimaginably sad day for our community," said Ryan.

Two students were wounded in the shooting and were treated at UVA Medical Center, Ryan said. One has been released.

These are the stories of the victims.

Devin Chandler was not only a great football player, but a "big kid" who loved to smile, sing and dance, UVA head football coach Tony Elliott said at a press conference Tuesday.

"Devin was what you wanted in a young person that's at this level but he was just a big kid," Elliott said. "The thing I remember about him is he always brought a smile to my face, because he just was happy with where he was, comfortable in his skin, and had a very bubbly personality."

Chandler, a junior, played as a wide receiver and kick returner for UVA and had transferred this offseason from the University of Wisconsin.

Chandler's family moved to Arlington, Tennessee, before his high school freshman year, where he played as a wide receiver and defensive back for Arlington High School, according to Sykes, who was head football coach at the school.

"We knew from the moment we saw him he was a very gifted player with a lot of potential," Sykes said.

Chandler was a player the team could always count on, Sykes said.

"Even during his junior year when his dad passed away in the middle of the season, he came to me and said, 'Coach, I want to play this week. My dad would want me to play this week.' That was his character: always thinking of others."

D'Sean Perry's family members say they are devastated by the loss of their son, a statement said.

"He was a loving, giving, caring, God-fearing young man who was full of life and potential, and who made his family proud," the statement said. "His positive impact was not only felt by our family, but also by the several communities that genuinely loved D'Sean, and that he was blessed to be a member of."

Perry's family appreciates the outpouring of love and support, according to the statement.

One of Perry's friends was at the vigil that drew hundreds to the campus on Monday.

"He was an amazing studio artist. He loved anime, he loved to cook and was one of the most loyal people that you'd ever met," said Zoe Tran, who told CNN affiliate WUSA that she met Perry during her first year on campus.

In between tears, Tran said she was grateful for Perry and his friendship.

"I wish that more people knew more about him," Tran said. "He was very reserved, but I think it was because he saved all of his love for those who were close to him."

Elliott said many people didn't know about Perry's artistic side.

Perry was "very, very artistic, and could draw, could shape pots with clay, loved music, very cultured and well-rounded," Elliott said. "Just a great teammate and had a sense of humor that was one of a kind that only D'Sean could have."

Perry was also known for his quick wit and his kind heart among the teachers and staff at Miami's Gulliver Preparatory Academy, from which he graduated in 2019, the school's president Cliff King said in a statement.

"D'Sean was an amazing soul that made his family and community proud," head football coach Earl Sims said. "His high moral character and integrity spoke volumes about the young man he was becoming. His presence was rich and made every encounter worthwhile."

Perry's parents thanked the South Florida and Charlottesville communities for the support they've received "during this impossibly tragic time," said their attorney Michael Haggard in a statement to CNN.

Perry, a junior, was a linebacker for Virginia who played in 15 games over the last three seasons. On Saturday against Pittsburgh, he tallied two tackles in the 37-7 loss.

"Big smile, lights up the room, and most people would say because he's the tallest guy in the room but just his presence, he's got a gentleness about him, but he's passionate about what he believes in," Elliott said.

As a 6-foot-7-inch receiver, Davis was the team's primary deep threat, with 16 catches for 371 yards and two touchdowns on the year, good for a stellar 23.2 yards per catch. The junior was one of the top wide receivers for the Virginia Cavaliers this season.

"The other thing that resonated was just how good of a teammate he was and how much he loved his teammates and would do anything for his teammates," Elliott said.

In a May 2021 video on UVA Football's Twitter, Davis said outside of class he enjoyed watching '90s movies and reading Shakespeare plays and the Bible.

"Virginia is the perfect place for anybody who wants to work hard and be great," he said. "At Virginia, it's way bigger than football."

A friend of the family created a GoFundMe campaign to help the family cover funeral expenses.

The two people injured in the shooting were identified by prosecutors as Marlee Morgan and Michael Hollins.

Hollins came off intubation and was moved out of the ICU, family friend Joe Gipson told CNN on Thursday.

"Mike is doing better today," Gipson said. "He is in intermediate care and progressing positively. He will hopefully begin to take some steps today."

Hollins is a junior and plays running back for the university's football team.

He was recently able to speak for the first time since the shooting, his mother, Brenda Hollins, told ESPN.

As soon as clinicians removed his ventilator, his family heard him thank his doctor, she said.

His first question to his family followed. "Where's D'Sean?"

"The room went silent, and so he knew," his mother said. "It was like, a cry I never heard before in my life, it was so deep."

CNN reached out to Morgan's family but has not received a response.

One of the two people injured was discharged Tuesday from UVA Medical Center, according to UVA Health spokesperson Eric Swensen.