In Michigan, Gretchen Whitmer leans on abortion rights to pave path to reelection 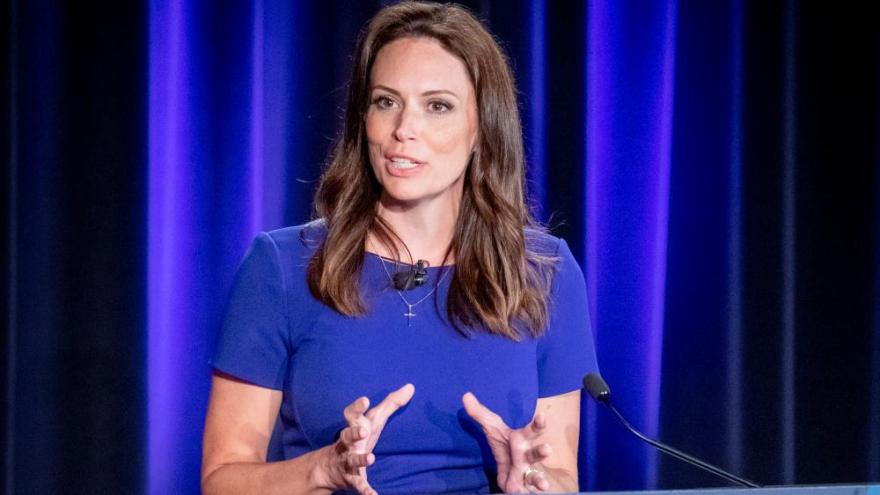 (CNN) -- At the Michigan State Fair, Labor Day weekend means livestock competitions. Goats, sheep, swine -- and all the sights, sounds and smells along with it -- consume the coliseum here, just outside Detroit.

Politics may seem like a world away here, but in a battleground state like Michigan, with a contested governor's race between Democratic incumbent Gretchen Whitmer and Republican challenger Tudor Dixon, politics is never too far -- especially on this unofficial campaign kickoff weekend.

The Rossells say they almost always vote Republican, but right now they're undecided.

"I lean towards the right, but I want what's best for this state and for the country when it comes to my politician," Dick Rossell said.

He said the economy is the issue that will most determine his vote, but he also believes there are times when abortion is necessary and wants to preserve that right for women.

As he said that, his wife, Dawn, nodded her head in agreement. She said abortion has never been an issue that would determine her vote, but this year it could.

"I want to hear more what Tudor Dixon has to say about abortion before I decide if that's who I'm going to vote for," Dawn Rossell said.

Currently, the right to an abortion is protected in Michigan. While a state law from 1931 banning abortion remains on the books, a state court has put the ban on hold. The ban was invalidated in 1973 by the Roe v. Wade decision, but since that precedent was overturned by the US Supreme Court, some Republicans would like to see the law go back into effect.

So far, most of what voters hear about Dixon's abortion position is from Democratic-funded ads flooding the airwaves using the conservative commentator's own words on abortion suggesting she supports a total ban with no exceptions.

Dixon did clarify in a July interview that she does support abortion if the life of the mother is at risk.

Since winning the Republican primary on August 2, Dixon has kept a low profile on the campaign trail.

At a recent meet-and-greet with voters in Grand Blanc, a town that leans Republican, she conceded that it has been a tough few years leading the state, between the pandemic, economic struggles and even an FBI-foiled kidnapping plot against her.

"People often ask, 'Why on earth do you want to keep doing this?'" Whitmer told the crowd. "Tough times call for tough people."

She talks a lot about the issue of abortion.

"The only reason Michigan continues to be a pro-choice state is because of my veto and my lawsuit," she said.

Even before Roe v. Wade was overturned in June, Whitmer had filed a lawsuit in an attempt to prevent the 1931 Michigan abortion ban from taking effect.

A petition to put a broad abortion rights measure on the November ballot drew nearly 600,000 valid signatures, though the state Supreme Court will now decide if it will go forward after a canvassing board deadlocked last week along party lines. The Republicans objected to spacing issues on the document as it was filed.

If the initiative is certified, Michigan will be one of a handful of states with an abortion referendum on the ballot in November. The issue drove a huge turnout of abortion rights supporters this summer in the red state of Kansas, where voters overwhelmingly rejected an amendment to remove the right to an abortion from the state constitution.

Whitmer, in an interview with CNN in Grand Blanc, was asked if Michigan could be the next Kansas.

"I can't speak to everything that was a part of informing the electorate in Kansas," she said. "What I can tell you is the vast majority of people in this state support a woman being able to make her own decision, whether it's one they would do or not."

At a recent roundtable discussion in Macomb County for women to talk about "reproductive rights," Whitmer opened up about her own trauma.

"When I was in college, like 1 out of 4 women, I was raped. And in the days, in the aftermath, it was devastating. And it didn't hit me right away, but maybe hours or a day into it, I thought, 'Oh my God, what if I'm pregnant?' And I knew that if that were the case, that I would have the ability to make my own choice for what was right for me," she recalled.

"I've got two daughters, and I'm infuriated by the thought that they have fewer rights than I had my whole life," she added.

A mother-daughter duo in attendance -- Emily Shereda and her mother, Rhonda McClinton, who said she is a swing voter who has supported both Democrats and Republicans -- echoed similar concerns.

"I would say that Roe v. Wade being overturned didn't necessarily change who I was going to vote for, but I think that it could absolutely change how people who are more so in the middle, like my mom, they will be more so pushed to vote for people who are going to protect the reproductive rights," said Emily Shereda.

"I could not have said that better myself," her mother added. "I honestly don't think that most people, especially my age group or even older, ever thought that they would even see this day."

Not all voters in Michigan feel a specific push to vote after the US Supreme Court ruled there was no longer a federal constitutional right to an abortion.

"I don't think that the abortion issue is a big deal in Michigan," said Aaron Gardner, a Republican running for state Senate and a Dixon supporter who was protesting outside a Whitmer campaign event in Grand Blanc.

"What most of the people care about is money in their pockets," he said. "Let's be realistic, gas prices have been skyrocketing through the roof, and our leadership in Michigan and in Lansing has failed the voters multiple times by not voting to remove the taxes."

Whitmer said she understands her constituents are suffering from economic challenges.

"People are struggling to put food on the table. The cost of everything has gone up. We've seen the cost of gas continuously come down for the last month and a half. That's a good thing, but I have been trying to get our legislature to work with me, to give families a tax break, a holiday on the sales tax as they get ready to go back to school. My Republican-led legislature wouldn't do it," the governor said.

(Republicans in the state House responded to Whitmer's proposal by suggesting on Twitter that it was an election-year gimmick and asserting that she had vetoed other tax relief measures.)

Much like President Joe Biden does on the national level, Whitmer makes a point of touting the good economic signs in Michigan.

She was recently in Bay City to tour a new semiconductor manufacturing plant.

"So, there's a lot of good happening. Not everyone's feeling it yet, and that's why we got to put our foot on the accelerator," she carefully added.

When asked about the effect the national mood and Biden's low approval ratings are having on her race, Whitmer offered empathy for her friend in the White House, if not a little bit of distance.

"It is tough to lead in these times. There's no question. And I've had to navigate a lot of tough stuff over the last few years," she said. "What I appreciate is any leader who ... uses every tool in their toolbox to live their values and try to solve problems. We see that happening on the federal level, but I'm not a creature of Washington, DC. I stay focused on Michigan and the people of Michigan."

Scarce on the trail

Through a spokesman, Dixon declined CNN's request for an interview. Her campaign would not share any details on public events or provide a surrogate for CNN to speak with.

Since she won the Republican primary last month, Dixon's presence on the campaign trail has been scarce. One Michigan GOP source said she is spending time fundraising and regrouping for the general election.

Last month, Dixon did make a brief appearance at the state GOP nominating convention in Lansing. She was joined after the convention by Virginia Gov. Glenn Youngkin, a Republican who won in his blue-leaning state last year by campaigning hard on the cultural divide and education.

In her remarks in Lansing, Dixon appeared to borrow from Youngkin's playbook.

"We want education freedom in the state of Michigan," she told the crowd.

Dixon then touched on another cultural topic, telling the crowd that they should know if a teacher has recently attended training on how to help kids change their pronouns.

"We should know that," she said.

Whitmer also seems to have taken lessons from the 2021 Virginia governor's race, where suburban voters who turned away from Democrat Terry McAuliffe cited education as a big issue.

In her interview with CNN, Whitmer made a point, unsolicited, of talking about the importance of public education and offered what appeared to be a counter-proposal on the issue of parent involvement.

"I've just created a parent advisory council to me, wanting to give parents an even greater voice in how we promulgate budgets or policies in Michigan. I think it's really important not to be disconnected but to really empower parents," she said.

Whitmer became a national figure during the pandemic. Her decisions on stay-at-home orders and mask mandates were not always popular, and back at the Michigan State Fair, that was still on some voters' minds.

Jordan said he usually votes Republican and likes everything about Dixon, "except the abortion issue."

"It seems like she's ...," he paused and thought for a beat. "You got to be more liberal with that abortion situation."