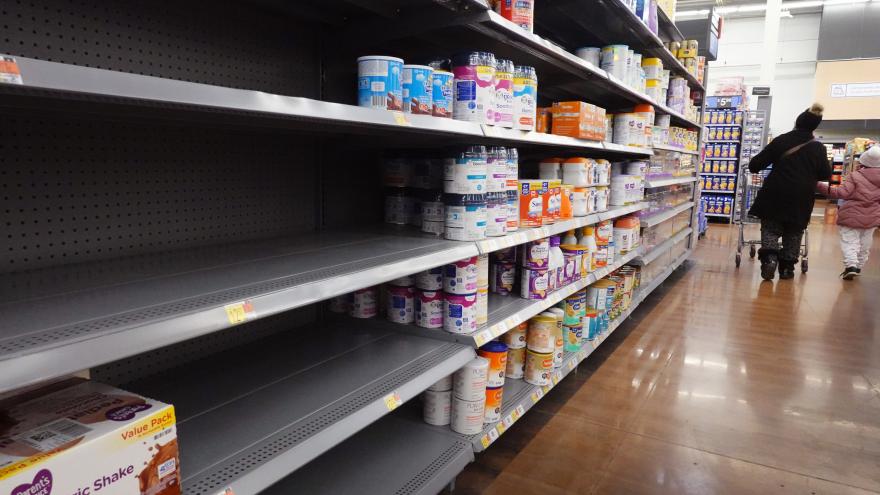 (CNN) -- President Joe Biden's West Wing has been thrown into crisis mode over a nationwide shortage of baby formula, with top aides undertaking efforts to restock grocery store shelves while coming under fire for a mess they didn't create and which they're still working to grasp the scope of.

The shortage has opened yet another political wound going into an already challenging midterm election season, frustrating the West Wing and the rest of the administration as they struggle with how little control they have over a situation which is centered at the US Food and Drug Administration, an independent agency which the White House neither controls nor gets direct reports from.

Officials -- who have deployed wartime measures and bypassing normal airfreight routes in response -- are now confronting criticism that the FDA moved too slowly to address warning signs. At the same time, they're attempting to learn whether formula companies are actually short on ingredients, while also trying to tackle potential price gouging.

Officials in multiple states have been slow to report whether they're having shortages or whether national attention has generated anxiety at the local level.

At the heart of the crisis is a shuttered manufacturing plant in Michigan. The Abbott Nutrition plant, which is poised to restart production soon, closed after two babies who had consumed formula produced there became ill and died, prompting an investigation.

The closure exacerbated shortages caused by supply chain disruptions and highlighted how concentrated the formula industry is. Only once the crisis was already underway did many in the administration even realize how much medically specialized formula for the entire country was produced out of just one plant.

Complicating the issue even further, Abbott Nutrition is the exclusive provider to about half of infants in WIC, the food assistance program that helps feed more than 1.2 million infants.

While White House aides have pointed to actions taken with the WIC program back in February, the FDA has yet to explain the four-month lag from when a whistleblower filed a complaint about the facility last fall and when the agency took action. FDA Commissioner Dr. Rob Califf told CNN that an internal review will be conducted into what went wrong.

Frustration is also mounting on Capitol Hill. During a hearing this week, Democratic Rep. Rosa DeLauro blasted the FDA, saying that if the whistleblower allegations are true, Abbott "lied, cut corners, falsified records" and "knowingly put a contaminated product on the market" and that the FDA knew about this in October, but it took them until late December to act.

Califf said the FDA investigation was not completed yet, and that he was not yet in a position to answer specifics, and that he would be prepared to go into much more detail at an oversight hearing next week.

Another Democratic lawmaker, Rep. Mark Pocan, challenged him on his silence.

"Please take this in the proper vein, but I think there was frustration when you were asked what happened in the answer you gave back as, 'We're investigating, we can't talk about it," Pocan said. "You can talk about it, and honestly, you should talk about it. One problem that I've seen over and over with the FDA in my 10 years here is you guys aren't good at communicating. And, you know, this is something that parents are asking us about, they want to know what happened.

"You all got to get that down to explaining in a way that real people can understand. I understand there's science behind it, but it's not acceptable to say that you can't comment on it."

Frustration building in the West Wing

Every move and comment Biden and aides have been making, meanwhile, has been weighed against increasing panic, with administration officials anxious about setting off hoarding, which would only increase the shortage.

As the crisis began to unfold, officials struggled with who should be the face of the crisis: the FDA, the Domestic Policy Council or the National Economic Council. All three were working to address the issue. Health and Human Services Secretary Xavier Becerra was departing for Indonesia. Eventually, officials from the NEC were some of the first to go on television, with the head of the FDA appearing only days later.

Though Biden spoke with the CEOs of Reckitt and Gerber, two of the other baby formula companies, last week, aides have been unable to get a clear answer from Abbott on why it has yet to reopen the plant.

Internally, frustration has mounted around the FDA itself -- an independent agency with which Biden has been adamant about not interfering -- for being too slow to approve importing formulas, aides tell CNN, because officials insisted ingredients produced overseas precisely meet US standards and levels, in addition to attributing other delays to having to translate labels and measurements on foreign labels. CNN has reached out to the FDA for comment on the White House's frustration.

The result: Formula that babies are drinking every day in countries all over the world had not been deemed safe enough for American babies, instead leaving many American babies without any formula at all as FDA officials have defended their efforts as moving carefully to prevent a potential spiral of additional health problems for babies.

A White House spokesman countered that they're "incredibly grateful for the work FDA has been doing to ensure the health and safety of our children. That is their obligation and together we are focused on solutions to getting more safe infant formula to the American people."

Biden's invoking of the Defense Production Act this week, meanwhile, took weeks because he and aides were initially skeptical that the move would have much effect. White House officials have been clear-eyed that the DPA is not a "magic wand" to instantly increase production. Biden's team debated internally about whether invoking it would move the needle significantly on production before eventually deciding to move forward.

The act, which can force private companies to shift into making needed goods, is the only real tool Biden had directly. As helpful as the DPA was in building up the supply of masks and other protective gear at the start of the pandemic, White House officials didn't see how other factories or plants could be brought up to speed to create formula, given how specialized the ingredients and machinery are at the Abbott plant.

As officials examined other provisions of the law, though, they saw ways to indirectly accelerate the supply chain and production process, whether by improving delivery of building block ingredients or needed machinery. Transportation Secretary Pete Buttigieg has acknowledged publicly that "a shortage of ingredients is not what led to the shutdown of the facility."

"We will do things to cut days off of production schedules and timelines to make sure we're moving things quickly to shelves," an administration official told reporters Thursday afternoon.

"In addition to invoking the DPA, I'm continuing to press the administration and industry leaders to cut more red tape, get any closed facilities up and running, and increase imports of safe baby formula from other countries," Spanberger said.

White House aides also pointed to other moves geared toward minimizing the psychology that leads to panic buying by trying to stabilize consumer confidence.

They've issued waivers which allowed customers to switch formula brands without doctors' notes or increasing potential sales under the WIC food program, guaranteeing a market for companies which have stepped up their own production. White House officials said Thursday that more formula is being produced now than before the Michigan plant was shut down.

Complicating the response: The two Cabinet secretaries with the most direct authority over the situation -- Becerra, whose department oversees the FDA, and Agriculture Secretary Tom Vilsack, whose department oversees food production -- were both in Europe over the last week for conferences with their G7 counterparts. Their absences were noted by others in the administration who remained in Washington working on both the behind-the-scenes and public responses.

Becerra's contracting Covid-19 while in Germany added another wrinkle, but his spokesperson Sarah Lovenheim said that the secretary has been stressing to international counterparts that on the need for imported formula, "They all receive the message: quick and safe."

Lovenheim described "a herculean effort to get more formula safely on shelves," adding, "Folks have been working around the clock, including over the weekend, and the goal is to continue moving quickly and safely to get formula into the hands of everyone who critically needs."

HHS is now taking the lead in paying for and arranging incoming shipments for what it's calling Operation Fly Formula, with the first announced on Thursday evening by the White House to bring 246 pallets with the equivalent of 1.5 million 8-ounce bottles from Switzerland to Indiana.

CORRECTION: A previous version of this story incorrectly stated which baby formula companies President Joe Biden had spoken with. He spoke with the CEOs of Reckitt and Gerber.