Insured losses from disasters will exceed $100B for second year in a row, led by Hurricane Ian, new data shows 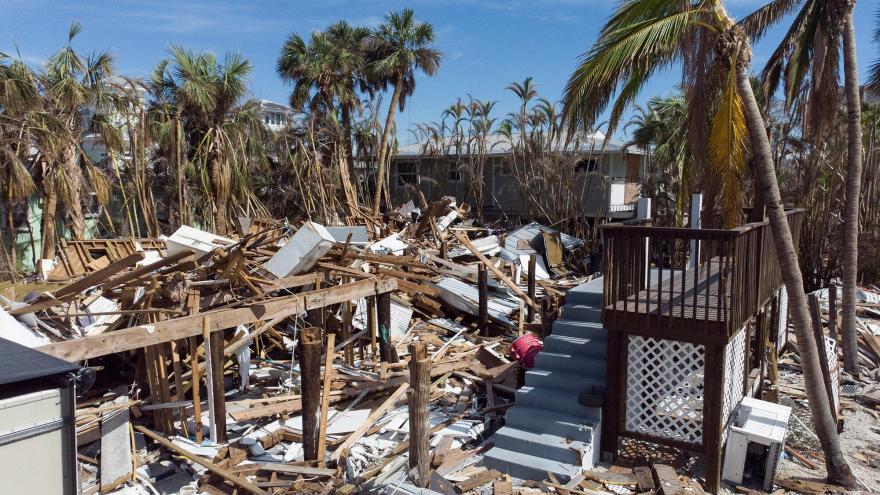 Remains of destroyed houses are seen almost one month after Hurricane Ian landfall in Fort Myers Beach, Florida, on October 26. Extreme weather disasters so far this year have caused $115 billion in insured losses around the globe.

(CNN) -- Extreme weather disasters so far this year have caused $115 billion in insured losses around the globe, with Hurricane Ian inflicting the largest insured loss of roughly $50 to 65 billion, new data from reinsurance company Swiss Re shows.

The company's preliminary analysis found that 2022 was the second year in a row in which insured losses are expected to exceed $100 billion. Swiss Re noted that these losses are trending up each year at a rate of 5 to 7% over the past decade.

Hurricane Ian, a Category 4 storm that killed more than 100 people when it made landfall in southwest Florida in late September, caused the highest insured loss this year and was the second-costliest on record after Hurricane Katrina in 2005, according to the analysis.

But other extreme weather events, including devastating winter storms in Europe, flooding in Australia and South Africa and hail storms in the US and France contributed to the staggering toll. The so called "secondary perils," which are those that typically bring small to mid-sized losses like hail, flood or fires, caused more than $50 billion in insured losses.

"2022 has been another year of increased natural catastrophe loss activity, and demand for insurance is growing as the protection gap remains vast," Thierry Léger, the company's chief underwriting officer, said in a statement. "To enable the insurance industry to keep up with increasing volatility and demand, it will be key to model evolving frequency and severity trends."

As the climate crisis accelerates, insurance losses from extreme weather catastrophes have been skyrocketing. A 2021 report from the World Meteorological Organization found that each extreme weather and climate-related disaster carried an average economic loss of $383 million, a sevenfold increase since the 1970s.

Hurricane Ian's rainfall was at least 10% higher due to climate change, according to an analysis. Global scientists have been very confident that climate change is increasing rainfall rates -- how hard the rain is falling -- and the amount of rain a storm can produce.

Martin Bertogg, head of Catastrophe Perils at Swiss Re, pointed to the growing number of people moving to climate change-vulnerable areas like the coasts as well as rapid urbanization that has greatly contributed to the large costs.