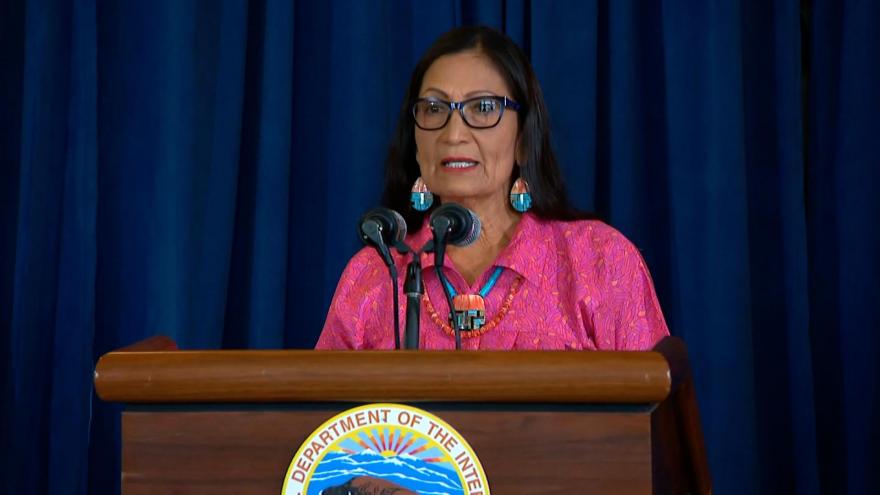 Interior Secretary Deb Haaland discussed on May 11 the findings of an investigation into the conditions that Native American children endured in boarding schools between 1819 and 1969.

(CNN) -- Native American children were renamed, told not to use Indigenous languages and had their hair cut at 408 boarding schools in the United States that forced assimilation in the 19th and 20th centuries, the Department of Interior says.

The department released on Wednesday a long-awaited review of past efforts by the federal government to assimilate Native American children into White American society by separating them from their families and stripping them of their languages and cultures.

The report, part of the federal Indian Boarding School Initiative announced by Interior Secretary Deb Haaland last year, outlines some of the conditions that children endured, a list of the boarding schools across the country, and identified more than 50 marked or unmarked burial sites.

The review notes that from 1819 to 1969, there were 408 federal schools in 37 states. The greatest concentration of schools was in what is now the state of Oklahoma with 76 institutions, followed by 47 schools in Arizona and 43 in New Mexico, the report states.

Children and teenagers at these schools were subject to "systematic militarized and identity-alteration methodologies" by the federal government, including getting English names, haircuts, wearing military or other uniforms, and being banned from using their native languages and exercising their religions, the report states.

Those rules "were often enforced through punishment, including corporal punishment, such as solitary confinement 'flogging, withholding food, ... whipping[,]' 'slapping, or cuffing,'" according to the report.

The initial investigation found that 19 boarding schools accounted for the deaths of more than 500 American Indian, Alaska Native, and Native Hawaiian children but the number of recorded deaths is expected to increase.

Assistant Secretary for Indian Affairs Bryan Newland said the country had not previously tried to explain the scope of the boarding schools policy. The report, he said, is an "opportunity to "reorient federal policies to support the revitalization of Tribal languages and cultural practices" and "counteract nearly two centuries of policies aimed at their destruction."

"Together, we can help begin a healing process for Indian Country, the Native Hawaiian Community and across the United States, from the Alaskan tundra to the Florida everglades, and everywhere in between," Newland said in a statement.

In an emotional news conference on Wednesday, Haaland said the consequences of the boarding school policies are "heartbreaking and undeniable."

The policies, she said, had impacted the lives of tens of thousands of children -- such as her maternal grandparents, who were forced to live in boarding schools at the age of 8 years -- and an unknown number of them never returned home.

"Each of those children is a missing family member, a person who was not able to live out their purpose on this Earth because they lost their lives as part of this terrible system," Haaland said.

As Haaland said one of her priorities is going beyond recognizing the impacts of the boarding school system to promote healing among Indigenous people, she announced that a group of American Indian, Alaska Native and Native Hawaiian survivors will began a year-long tour across the country to share their stories and "facilitate the collection of a permanent oral history."

Deborah Parker, CEO of the National Native American Boarding School Healing Coalition, said the release of the report was a "historic moment."

"It reaffirms the stories we all grew up with. The truth of our people and that often immense torture our elders and ancestors went through as children at the hands of the federal government and the religious institutions," Parker said.

But Parker said there is much more work yet to be done.

The department said the report released on Wednesday is not comprehensive and is only the first volume of the initiative's findings.

The department is expected to continue investigating Indigenous boarding schools through fiscal year 2022 and produce a second review that determines the locations of marked or unmarked burial sites, identifies the children interred at such locations and the federal funding linked to the schools.

Crystal Echo Hawk, founder and executive director of IllumiNative, described the boarding schools' policies as one of the darkest moments in the country's history and said she hopes the report leads to justice.

"We cannot begin to heal until every unmarked grave is accounted for and all our children are returned home. We hope that today begins a longer journey towards justice," she said.