Iowa teen ordered to pay her alleged rapist's family $150,000 is not the first sex trafficking victim penalized for killing their alleged assaulter 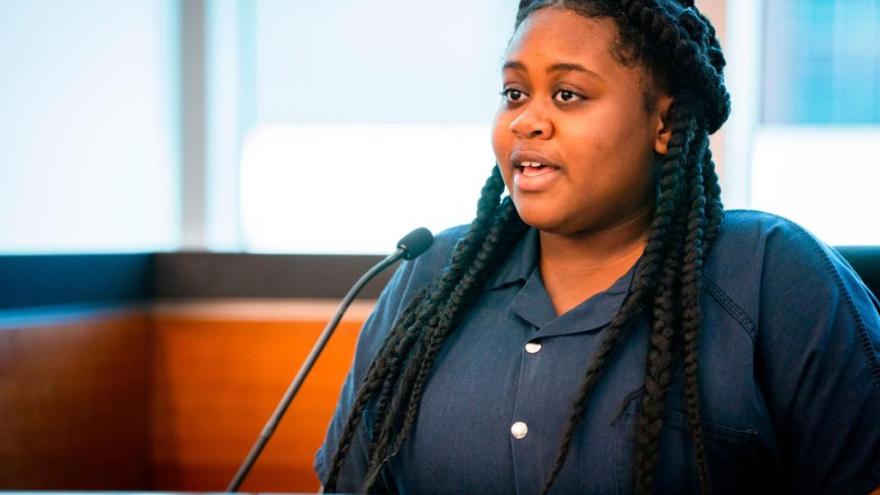 (CNN) -- An Iowa judge's ruling this week ordering a teenage girl -- who was 15 when she killed a man she said raped her multiple times -- to pay his family $150,000 in restitution has reignited conversations about what justice looks like for girls and young women who have experienced sexual violence.

Lewis is just one of several teenagers -- often of color -- who have been legally penalized or convicted of killing their sex trafficker or assaulter in recent years in the US.

Last month, California Gov. Gavin Newsom granted clemency to Sara Kruzan, who was sentenced to life without the possibility of parole as a teenager for killing a man who sexually abused and trafficked her in 1994.

In Wisconsin, Chrystul Kizer is facing a life sentence for killing the man she said forced her into sex trafficking. After a state Supreme Court ruling in July, Kizer will be allowed to argue in court her actions were a "direct result" of being trafficked, a defense that could see charges against her acquitted.

And in Tennessee, Cyntoia Brown was sentenced to life in prison for killing a man who paid to rape her when she was a 16-year-old trafficking victim. Now 32, Brown was granted clemency in 2019, after spending half her life behind bars.

In response to Lewis' ruling, Brown -- who is now a criminal justice reform advocate and author -- told PBS Newshour, "It's just a story that has unfortunately become all too familiar."

"She was a victim in this situation, not only is she going to have to serve time in a facility, but, over the next five years, anything that she does can trigger her having to serve a 20-year sentence. So she's not truly free."

Advocates like KellyMarie Meek of the Iowa Coalition Against Sexual Assault told CNN, "Women of color who've experienced sexual violence and trafficking who act in self-defense against the people who harmed them have not been treated well by our legal system historically."

'Punished rather than protected by the legal system'

Iowa is not among the dozens of states with a so-called safe harbor law providing legal protections to victims of human trafficking.

"There is a disproportionate number of black and brown folks that are in our criminal legal system and that are incarcerated in our jails and prisons in Iowa," Meek said. "It is a lot more than you would expect based on the population of folks of color in Iowa. And so it, it's hard to imagine that that didn't have something to do with it."

The most recent figures from the US National Human Trafficking Hotline identified 22,326 trafficking victims and survivors in 2020. Of those, 14,597 were cases of sex trafficking and 1,048 were sex and labor trafficking, or forcing someone to work by fraud or coercion. Farm and domestic work are common avenues of labor trafficking, according to the hotline.

The average age of those trafficked was 17, and the numbers sharply decline of those older who were identified by the hotline. The sum of younger victims was about the same as the number of 17-year-olds.

In her plea agreement, Lewis laid out the series of events leading up to the killing. She described running away from an abusive home environment and ending up with nowhere to live until being taken in by an older man who she said trafficked her and forced her to have sex with other men for money, including Brooks ... She described being assaulted repeatedly, ?including while being unconscious, stating, "I suddenly realized that Mr. Brooks had raped me yet again and was overcome with rage."

Lewis was facing up to 20 years in prison after pleading guilty to voluntary manslaughter and willful injury. But the judge deferred those sentences on Tuesday -- meaning her guilty plea could be expunged if she completes five years' probation at a residential correctional facility.

The judge said the restitution was mandatory under Iowa law. "This court has no discretion but to impose $150,000 in restitution payable to Mr. Brooke's estate."

Meek said she understood the restitution ruling and the fact the judge did not have any discretion.

"It worked out really poorly in this case, but I don't want to automatically swing the pendulum and say, we're just going to get rid of that," she said.

As outrage continues to grow over Lewis' case, a GoFundMe campaign launched by one of Lewis' former teachers surpassed $388,000 by Thursday afternoon. But rights activists say the case highlights a broader trend of victims of sexual abuse and trafficking being punished rather than protected by the legal system.

"The decision to prosecute Lewis and the subsequent sentence sends a clear message to Black women, girls and gender expansive individuals -- the law will not protect you -- and if you defend yourself, you will pay a high price," Marcela Howell, the president and CEO of nonprofit advocacy group In Our Own Voice: National Black Women's Reproductive Justice Agenda, said in a statement after the ruling.

Experts like attorney Lindsey Ruff told CNN, "Too often, we see a tragic pattern where the criminal justice system punishes the victims of horrific crimes, rather than the true perpetrators."

Ruff, who represented multiple groups in a brief supporting Kizer, said the root causes of human trafficking are complex and addressing those issues requires complex solutions.

"Many trafficking victims -- especially child victims like Chrystul or Peiper -- suffer severe psychological consequences as result of trafficking, which can lead them to enact in seemingly anomalous ways," she said. "They might cope in self-destructive ways like drug use or violence, they might use self-help to defend themselves. These kinds of behaviors can increase the risk of -- or directly result in -- contact with the criminal justice system. The causal link between victimization and criminality creates a cycle where victims are penalized for their reactions to their own trauma."

Trauma is not understood

Meek also expressed concern about Lewis' ability to manage the terms of her probation due to the severity of her trauma.

"Five years [of] probation under strict supervision is something that concerns me, because I know that many of the ways that trauma survivors deal with their trauma is not understood very well by folks that haven't experienced trauma, which can sometimes lead to behaviors that get folks in trouble," she said.

It's a sentiment Brown shares as a survivor turned advocate.

"We have a long way to go in educating people what it's actually like for someone who's a victim of trafficking, the life that they have to live, the things that they have to resort to just to survive," she said in the interview with PBS NewsHour. "Even in states where we do have mechanisms in place for prosecutors, for judges to be lenient, to look at these individuals as young girls who reacted from a place of trauma and who are in need of services, and not being incarcerated, sometimes, the people who are involved in these cases don't necessarily see that."

The issue is complex and experts like Ruff say the power dynamic between the victim and their abuser needs to be considered to avoid re-traumatizing victims by penalizing them for protecting themselves.

"An ongoing physical and emotional power imbalance between a victim and their abuser can lead to learned helplessness, and the sense the threat of serious injury is ever present and always imminent," Ruff said. "Abuse can erode a victim's sense of security to the point that they never feel safe, which can cause them to act out of fear or desperation in interactions with their abusers."

Across the US, the children most vulnerable to sex trafficking are those living in poverty, often known to child protection services, in foster care, in generally unstable conditions, social workers and researchers say. Many have been sexually abused as children before they become victims.

"Our data shows that people are exploited because traffickers know that there are certain groups of people that don't have the support, that don't have the ability to get accountability, or justice for themselves," Robert Beiser, the strategic initiatives director for sex trafficking at Polaris, which runs the National Human Trafficking Hotline, previously told CNN in a report on sex trafficking. "And those people who, if you exploit them, it's much less likely that any problems will come your way as a trafficker or as a sex buyer."

The trauma lingers for victims of sex trafficking and for teens like Lewis who exist at the intersection of being Black, a girl and growing up in unstable environments -- the road to justice is unwieldy.

"Injustice and violence against Black women and young girls are reproductive and racial justice crises, whether the harm is perpetrated by an abuser, police officer, or the courts and criminal legal system itself," Monica Simpson, executive director of SisterSong, told CNN.

"This is yet another example of how the system fails our communities, and in fact, sanctions and allows for the continued punishment of Black women and girls."