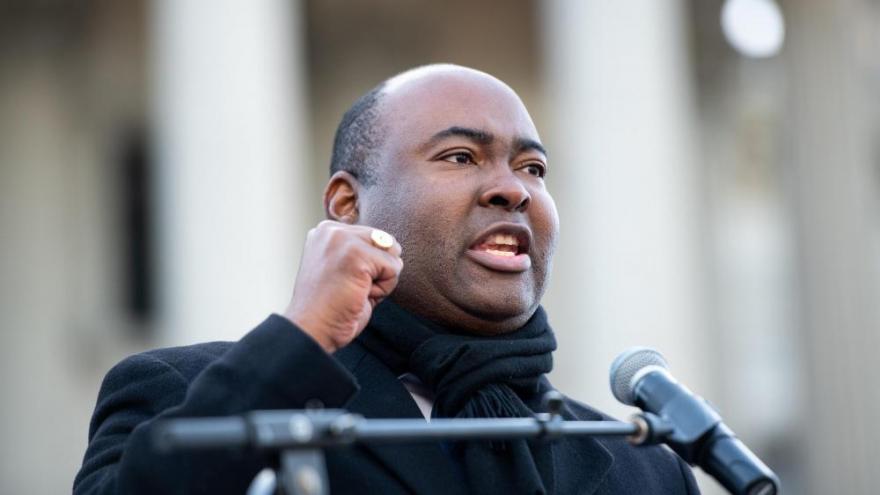 U.S. senate candidate Jaime Harrison speaks to the crowd during the King Day celebration at the Dome March and rally on January 20, 2020 in Columbia, South Carolina.

(CNN) -- Former South Carolina Democratic Party Chair Jaime Harrison has officially been elected the next chair of the Democratic National Committee, winning the organization's election after President Joe Biden selected him for the top political job.

Harrison, who unsuccessfully ran for the Senate in 2020, will now be asked to guide the top committee at a time when Democrats have control of all three key bodies in Washington, the White House, the Senate and the House of Representatives.

"I have no intention of letting victory turn into complacency, because we have seen what happens when we don't invest everywhere. I plan to get to work to lift up the Biden-Harris administration, build on our progress and strengthen our party," Harrison said.

Harrison's task, unlike that of his predecessor Tom Perez, will be to act as a megaphone for Democratic accomplishments in the coming years and push back against Republican attacks, all in the hope that the party avoids losing its majorities in the 2022 midterm elections.

"The job of doing the work is on the Hill and in the White House; the job of making sure that message gets out and it is promoted and disseminated to voters and so those voters have an understanding of it, I believe that's the job of the DNC," Harrison told CNN in an interview before he was officially elected chair. He went on to describe the job as getting "that message out" so people "understand this is what you get when you have Democrats in control."

Harrison had long been seen as the only candidate for the job of DNC chair and Biden made his selection official shortly before he was inaugurated. The former Senate candidate officially took the job on Thursday after the members of the Democratic National Committee met virtually to approve Biden's slate of nominees.

There was no suspense to the election: The only slate of candidates submitted was the one proposed by Biden's transition team, multiple Democratic officials tell CNN.

"My friends, in spite of everything we have been though in the last year, I am excited because today we are embarking upon a new mission to build back better and bring hope back to this great nation," Harrison said in his first address to the DNC.

He also nodded to the need for Democrats to make inroads in reliably Republican states and rural America.

"We are done looking at the map, ignoring the red, while we focus on a few purple areas," Harrison said. "We are done with just focusing on our cities while forgetting those living on dirt roads. When I look at the map, I see an entire country at stake."

In addition to Harrison, a series of high-profile Democrats will be taking on leadership roles at the DNC under Biden.

Atlanta Mayor Keisha Lance Bottoms is now the committee's vice chair of civic engagement and voter protection, while Michigan Gov. Gretchen Whitmer, Sen. Tammy Duckworth of Illinois and Rep. Filemon Vela Jr. of Texas are all vice chairs. Virginia McGregor was approved as committee treasurer, while Jason Rae will continue in the role of secretary and Chris Korge as national finance chair.

Perez will leave his DNC post after four years at the helm. The former Obama labor secretary took over the committee in 2017, when it was rudderless, scandal-prone and unable to raise serious money after years of neglect by the Obama administration. Perez worked to rebuild the committee and focused on two key issues: investing in the infrastructure of the party and rebuilding trust in the DNC after the committee became a source of controversy during the 2016 nominating fight between Hillary Clinton and Bernie Sanders.

"We had to rebuild our infrastructure and rebuild trust, and I believe we have made great progress in both those areas," Perez said during remarks on Thursday.

He leaves the committee in a significantly better place than he found it. The DNC helped Biden shatter fundraising records during the 2020 campaign and is now well positioned with a strong small-dollar donor based that was nearly nonexistent four year earlier.

"Frankly," Perez told the audience on Thursday, "we inherited a Radio Shack and turned it into a Fifth Avenue Apple store."

Harrison, however, will be asked to do something much different -- and his power will be somewhat constrained by the politics of the White House, which will have direct control of the committee. Jen O'Malley Dillon, Biden's deputy chief of staff and former campaign manager, will have operations of the committee within her purview, meaning she will work to ensure that the political committee's work is in step with Biden's political goals. O'Malley Dillon was the executive director of the DNC after Obama's 2008 election.

Ken Martin -- the chair of the Minnesota Democratic-Farmer-Labor Party -- was reelected Thursday to be the president of the Association of State Democratic Committees, an organization within the DNC that coordinates among all the state parties.

"I look forward to continuing our party's work of electing champions for justice, freedom, fairness, and opportunity for all Americans," Martin said in a statement in response to his reelection.

Perez, a diehard Buffalo Bills fan, ended a tribute to his tenure by joking about some time off.

"Please don't call me between 3 o'clock and 9 o'clock this Sunday," he said, a nod to the Bills playoff game against the Kansas City Chiefs.