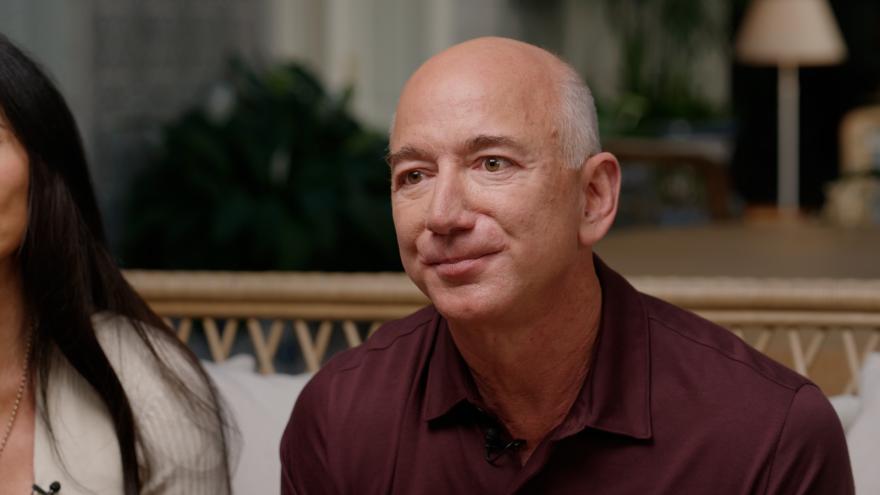 (CNN) -- Jeff Bezos is continuing to make good on his pledge to give away the majority his wealth, to the tune of $123 million today.

The Amazon founder announced on Instagram Tuesday that he has recently awarded 40 grants as part of his Bezos Day 1 Families Fund initiative, which he launched in 2018. The donations are part of a $2 billion total commitment to combat homelessness.

The latest charitable donations come one week after Bezos sat down in an exclusive interview with CNN and said he plans to donate the majority of his $124 billion net worth during his lifetime. He said he will devote the bulk of his fortune to fighting climate change and supporting people who can unify humanity in the face of deep social and political divisions.

That marked the first time the billionaire announced plans to give away most of his money. Critics have previously chided Bezos for not signing the Giving Pledge, a promise signed by hundreds of the world's richest people to donate the majority of their wealth to charitable causes.

But Bezos went beyond the Giving Pledge in CNN's interview and said that giving away his wealth comes down to "figuring out how to do it in a levered way."

"It's not easy. Building Amazon was not easy. It took a lot of hard work, a bunch of very smart teammates, hard-working teammates, and I'm finding — and I think Lauren is finding the same thing — that charity, philanthropy, is very similar," he said.

"There are a bunch of ways that I think you could do ineffective things, too," he added. "So you have to think about it carefully and you have to have brilliant people on the team."

Last week Bezos and his partner, Lauren Sánchez, also made headlines for honoring Dolly Parton with their Courage & Civility Award, which comes with a $100 million grant to Parton to use towards her philanthropic efforts. Similar grants have gone to chef Jose Andrés, who has spent some of the money making meals for Ukrainians — and the climate advocate and CNN contributor Van Jones.

Following CNN's interview with Bezos, his ex-wife, Mackenzie Scott, announced that she was donating another $2 billion to various organizations. Scott has given away nearly $4 billion to 465 organizations in the span of less than a year.

The organizations Bezos is funding in this round of grants include The Salvation Army, Denver Metro Area, Mother Nation: Honoring the Beauty and Strength of Native Families in Seattle and Homeless Alliance in Oklahoma City.

According to a press release for the organization, the Bezos family fund has provided over $520 million in grants to 167 organizations across the United States.

"With these funds, the organizations will continue their compassionate, needle-moving work to help families move from unsheltered homelessness and shelters to permanent housing with the services they require to achieve stability," the statement said.