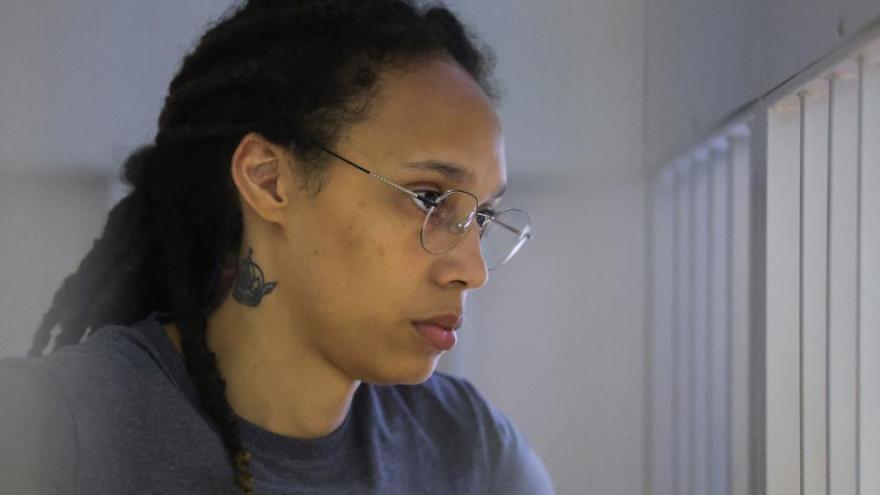 President Joe Biden said the nine-year sentence handed down to WNBA star Brittney Griner by a Russian court for drug smuggling is "unacceptable." Griner is pictured here before the verdict in a court hearing outside Moscow on August 4.

(CNN) -- President Joe Biden on Thursday said the nine-year sentence handed down to WNBA star Brittney Griner by a Russian court for drug smuggling is "unacceptable."

"Today, American citizen Brittney Griner received a prison sentence that is one more reminder of what the world already knew: Russia is wrongfully detaining Brittney. It's unacceptable, and I call on Russia to release her immediately so she can be with her wife, loved ones, friends, and teammates," Biden said in a statement.

He continued, "My administration will continue to work tirelessly and pursue every possible avenue to bring Brittney and Paul Whelan home safely as soon as possible."

The Russian court said that Griner committed the crime deliberately and sentenced her to nine years of jail time and a fine of 1 million rubles, which is roughly $16,400. Griner was arrested with less than 1 gram of cannabis oil in her luggage at Moscow's Sheremetyevo International Airport on February 17.

Griner pleaded guilty and said it was "an honest mistake" due to packing in a hurry.

US officials say she has been wrongfully detained and have called for her release as fears mount that she is being used as a political pawn amid rising tensions between the Kremlin and the Biden administration after Russia's war on Ukraine.

The sentencing comes after CNN has reported that the US made a "substantial offer" with Russia of a proposed prisoner swap for Griner and Whelan. Whelan, a US citizen and former Marine, was arrested in Moscow on espionage charges in 2018 and subsequently sentenced to 16 years in prison in a trial US officials denounced as unfair.

Griner's lawyers, Maria Blagovolina and Alexander Boykov, said in a written statement following the announcement of the verdict that the court ignored all the evidence they presented and that they will appeal the decision.

In closing arguments on Thursday, Blagovolina argued Griner never used marijuana in Russia and that she never had the intention of doing so.

US officials tell CNN they believe the state of play on trying to get Griner out of Russia remains the same for now. The US made what the Biden administration has described as a "substantial offer" to exchange both Griner and Paul Whelan for Viktor Bout, a convicted Russian arms trafficker serving a 25-year US prison sentence. The administration will continue to try to move forward on those negotiations and press Russia to accept that offer, officials said Thursday.

But, as one official pointed out, the process is expected to continue to take some time and it is ultimately up to Russia how quickly they want to move.

"The ball is in Russia's court" right now, one official said.

Last month Biden and Vice President Kamala Harris spoke by phone with Griner's wife, Cherelle Griner. Biden also wrote a letter to Griner after she sent a handwritten letter to the President.

Secretary of State Antony Blinken condemned Griner's sentence and said it "further compounds the injustice of her wrongful detention" and "puts a spotlight on our significant concerns with Russia's legal system and the Russian government's use of wrongful detentions to advance its own agenda, using individuals as political pawns."

"Nothing about today's decision changes our determination that Brittney Griner is wrongfully detained, and we will continue working to bring Brittney and fellow wrongfully detained U.S. citizen Paul Whelan home," Blinken said in a statement Thursday. "This is an absolute priority of mine and the department's."

Blinken said the US would "also continue to press for fair and transparent treatment for all US citizen detainees in Russia."