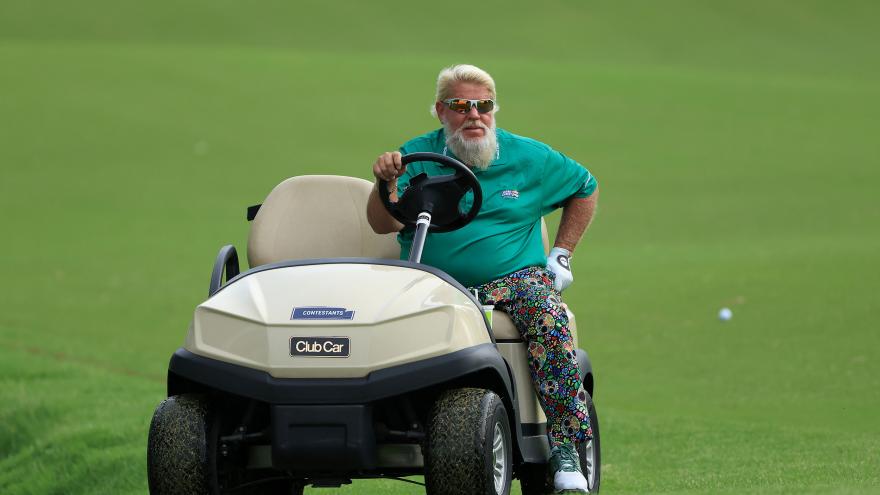 (CNN) -- When it comes to living their life, their way, no one does it quite like John Daly.

The 56-year-old was one of the stars of the opening round at the 2022 PGA Championship on Thursday, decked out in his green top and extravagant trousers as is tradition.

Daly was in the first group off the tee in the first round, and he started well, birding the first and fifth holes to move close to the top of the leaderboard.

Using a cart to navigate the course, Daly puffed on multiple cigarettes as he made his way around the 18 holes.

Although he slipped down the board during his back nine holes -- including four bogeys in his final five holes -- the 1991 PGA Championship winner enjoyed a successful day under the Oklahoma sun at the Southern Hills Country Club.

And for one of golf's more colorful personalities, Daly celebrated after his first round in the most "John Daly" way.

While his other competitors might be resting up or on the range making some small tweaks, Daly was getting some well-earned rest and food.

He posted on his Instagram a picture of himself outside a Tulsa Hooters chain where he says he was "happy to stop by and see my Tulsa Hooters family and grab me some wings on the fly!"

The two-time major winner was even spotted later in the evening at a casino enjoying the slot machines.

Daly began Friday's second round two-over par, seven shots behind leader Rory McIlroy, but the 56-year-old's round of 76 ensured he missed the four-over cut line.