John Kerry is trying to convince the world to act on climate change. Russia's war made it that much harder 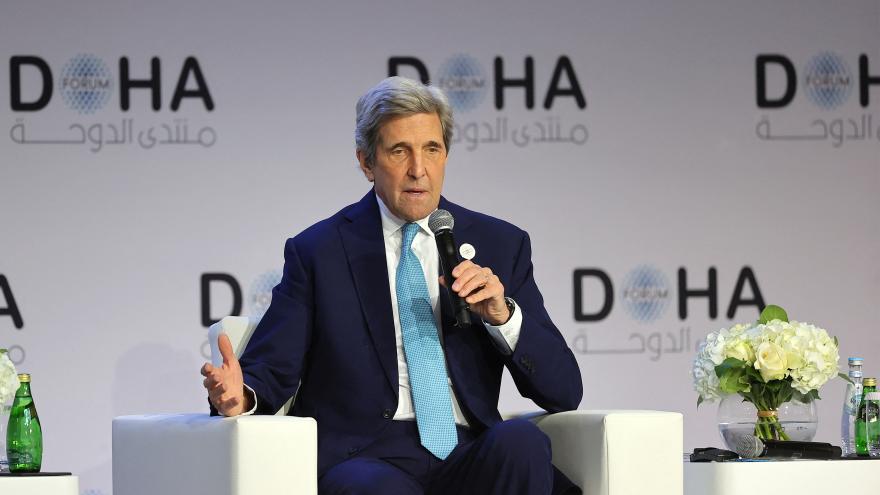 (CNN) -- John Kerry has a mission: To convince the rest of the world to embrace renewable energy and slash their planet-warming emissions. But the US Climate Envoy's job isn't getting any easier in year two.

With global temperatures and fossil fuel emissions climbing to new highs, Russia's war in Ukraine is roiling energy markets and putting short-term climate goals at risk. Countries -- including the US and UK -- are planning to drill more of their own oil and gas to fill the void of the Russian energy they've banned.

Meanwhile, China, the world's largest greenhouse gas emitter, appears to be doubling down on coal as it prioritizes energy security. Even with China producing vast amounts of renewables, the country's continued coal use could doom the goal of limiting global warming to 1.5 degrees Celsius.

And Kerry faces troubles at home too: it's still unclear whether Congress will pass President Joe Biden's climate and economic bill, which contains billions in clean energy tax credits.

Without strong climate legislation from Congress, the country's climate leadership and credibility will continue to be called into question.

"He's been a very effective envoy, trying to push people towards increased ambition," John Podesta, the top climate adviser to the Obama administration, told CNN of Kerry. "In light of Putin's assault on Ukraine, the diplomacy gets that much harder."

But Kerry's message is simple: the climate crisis cannot take a backseat to short-term fossil fuel growth while the world figures out the energy crunch.

"Obviously, the entire gas picture and fuel picture of Europe has changed overnight," Kerry told CNN. "It's not fun, but we've got to get through it. [Climate change] is not something that goes away. Because Putin invaded Ukraine doesn't mean 'okay, climate is over, and we don't have to worry about it.'"

It's still too early to know for certain whether Russia's war in Ukraine and the resulting energy pinch will be good or bad for climate in the long run. But it's terrible in the short-term, as countries rush backward to traditional fossil fuels to make up the gaps.

Kerry cautioned that any short-term increase in domestic fossil fuel production must be just that: short-term, and with an off ramp.

"This is not a free license to come in and pollute like crazy," Kerry said. "It's got to be a responsible effort to in the short term fill a gap, but with a clear plan for where you're heading in terms of reducing emissions."

The latest report from the UN Intergovernmental Panel on Climate Change said the world has fewer than three years to peak emissions and rapidly decarbonize. Countries need to ditch fossil fuels as fast as possible by switching to cheaper renewables, and actively remove carbon from the air to have any hope of keeping global temperatures in check. We have plentiful cheap energy with wind and solar; what's lacking is the political will to get there, scientists say.

Kerry's job now is to instill that political will.

"There's a lovely saying: Diplomacy is the art of letting someone else have your way," his former top deputy Jonathan Pershing told CNN. "Kerry is very good at it."

'Can they go faster?'

There's also a tough geopolitical map that could form out of the Russia-Ukraine conflict, with two blocs of countries: one that is moving forward with renewable energy and the other that chooses to stick with fossil fuel, Podesta told CNN.

"You've got an international environment that feels like it's cracking into two camps," Podesta said, putting the US and Western Europe into one camp, and Russia, China and Saudi Arabia into the other. "It's possible you really have -- in a way that we haven't had since the 1990s -- an east bloc and a west bloc. If that happens, what does that mean for climate? Kerry's instinct, my guess is, is to try to hold the global system together, but that might be a lot more difficult."

Podesta said he could see China easily becoming the leader of a bloc that is "both strategic and economic."

"The question is, do they want to be the leader of the old economy as Europe and the US are trying to create a new economy?" he said.

China made a deal with the US at the COP26 UN climate summit last fall to reduce its emissions of methane -- a potent planet-warming gas. The implementation of that deal is still a key goal for the Biden administration. Kerry said China is working on a specific and "ambitious" plan detailing how they will lower methane emissions -- a plan that could also affect the country's coal use, as much of China's methane come from coal.

"We've never stopped talking to China," Kerry said. "Obviously, if you can't get China to do enough, we can't get where we want to go. So, it's very, very important to continue to work with them."

Pershing told CNN that the relationship between Kerry and China's climate envoy Xie Zhenhua remains one of paramount importance.

"They don't agree on some very fundamental things, but they respect each other enough to engage each other," said Pershing, who left Kerry's office late last year to return to the William and Flora Hewlett Foundation as the director of its environment program.

The in-person meetings combined with regular virtual engagement gave the US and China a relationship that opened some doors, Pershing said.

"Did it shift the underlying US-China dynamics? Not really," he added. "But that wasn't [Kerry's] intent -- his intent was to open the door far enough to have a successful negotiation on a climate agenda."

Still, China remains a persistent challenge. A slowdown of domestic economic growth and anxiety about energy security has caused the country to double down on coal to build more infrastructure and keep the lights on.

"The country suffered nationwide power shortages last fall," Li Shuo, a climate analyst with Greenpeace in China, told CNN. "This -- coupled with the ongoing crisis in Ukraine -- creates a strong desire for stability and self-sufficiency. More coal helps calm down that anxiety."

Shuo noted that China started approving new coal plants at the beginning of the year and other pro-coal policies could be expected to follow later. But at the same time, he and Pershing said that China is investing in renewable energy with incredible speed. China leads the world in growing its renewables capacity, accounting for 43% of global renewable capacity growth and adding close to 50 gigawatts of offshore wind in 2021 alone.

Pershing noted that the city of Shenzen, China, has more electric buses than the rest of the world combined.

Shuo said renewables help boost China's economy much like coal plants do, and therefore will keep growing fast in the country.

"Our challenge is while building new and clean energy, how to bid goodbye to the old and dirty," Shuo said.

The climate at home

Far from his diplomatic travels, one of Kerry's biggest challenges this year could be what happens at home.

Kerry told CNN his team's main mission heading into COP27 in Sharm-el-Sheikh, Egypt, this year will be getting other countries to meet the goals they set in Glasgow. But the US goals remain unmet, too -- Biden's target to slash greenhouse gas emissions in half by 2030 is largely dependent on a climate bill passing Congress.

With six months left before the UN's Egypt summit and the midterm elections, there is a very limited window for Democrats to pass a bill, and their swing vote belongs to West Virginia Sen. Joe Manchin -- who killed Biden's larger bill and its $555 billion in climate and clean energy funding last year.

Spurred in part by the European energy crisis, Manchin is back in discussions with the White House over a smaller bill for clean energy measures. Kerry recently had dinner with Manchin when the two were in Paris for an international energy conference and said a climate bill passing the Senate this year is a "real possibility."

"I don't want to speculate what happens if we don't," Kerry told CNN. "I'm going to count on doing it, because we've got to do it."

Without legislative progress, US leverage going into COP27 could drop. And other countries have been asking US climate diplomats where the domestic Congressional action is.

"They do ask -- and they should ask," Pershing said, pointing to the "checkered history" and inconsistent US climate policy that has ebbed and flowed with the whims of each president.

Still, the fact that Kerry is remaining in his role longer than many expected is a win for international climate diplomacy, those close to Biden's envoy said.

"Kerry's also got standing," Pershing said. "It means that people respect him, they give him a hearing, they give him the entrée to have the discussion."