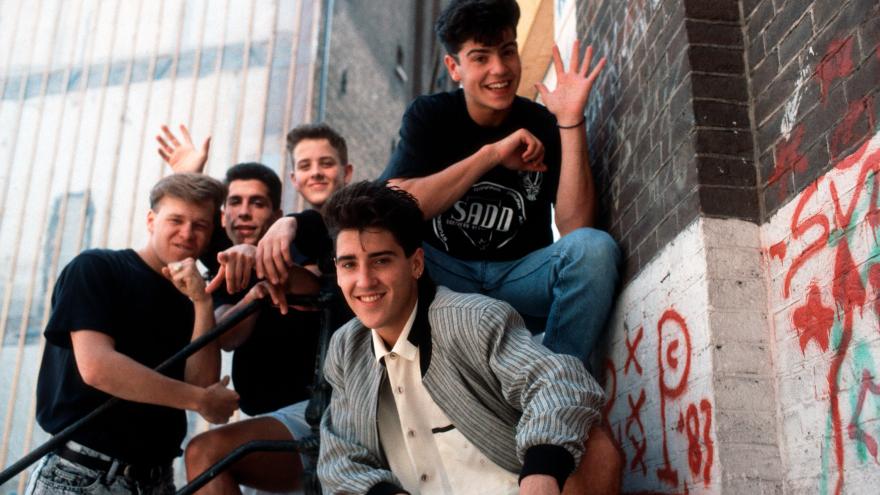 (CNN) -- New Kids on the Block star Jonathan Knight has revealed that he was pressured into hiding his sexuality during the band's early days.

Knight, now 54, said that the band's manager at the time knew that he was gay, but urged him to keep his sexuality a secret.

One-fifth of the Massachusetts-based boy band, Knight revealed last year that he had married his longtime partner, Harley Rodriguez.

But much has changed since he and his bandmates -- his brother Jordan Knight, Donnie Wahlberg, Danny Wood and Joey McIntyre -- shot to fame in the 1980s.

Speaking to Frosted Tips, a podcast hosted by former NSYNC member Lance Bass, Knight said of the group's manager: "He pulled me aside and he was like 'if anybody finds out then your career is over, the New Kids' career is over,' my manager said, 'my career is over ... Sony's going to, like, lose money.'"

"It was just so much pressure," he added. "Looking back, that's a lot of pressure to put on somebody who is just trying to figure out the world themselves.

He recalled being the first to leave the band in 1994, saying: "Pop music was just not what it used to be and you know we went from arenas down to theaters and then eventually I left the New Kids and they continued on and they were doing nightclubs. And it just kept going down and down but I had jumped out early.

"There were a few reasons. Number one, being a young gay kid I was frustrated and wanted to get on with my own life. The other reason, it just felt like it was not going anywhere and I just wanted to be home."

The group officially disbanded soon after and only reunited in 2008.

"Even when we got back together I still wasn't out publicly," he told Bass. "It was a boyfriend of mine that sold pictures of us to the National Enquirer."

He described the process as "horrible," but welcomed the fact that so much has changed in recent years.

"Even the way people come out now has changed," he said. "People will be doing an award show and just be like 'I'd like to thank my husband blah blah blah...' and nobody flinches."

Bass, who became a father to twins with his husband, Michael Turchin, in 2021, also brought up changing attitudes to parenthood within the gay community.

Knight said that "95%" of his and Rodriguez's gay friends are now parents, but that the process was not straightforward for them.

"We tried and we went through the journey for about five years and it just didn't happen for us," said Knight. "Going through the process is like 'today's the day, the eggs are being implanted.' You're so excited and you're so happy and then a week later it's like no, you're back to square one."

Knight spoke about his second career as a presenter on TV renovation show "Farmhouse Fixer," as well as the band's appearance on cruises in recent years.