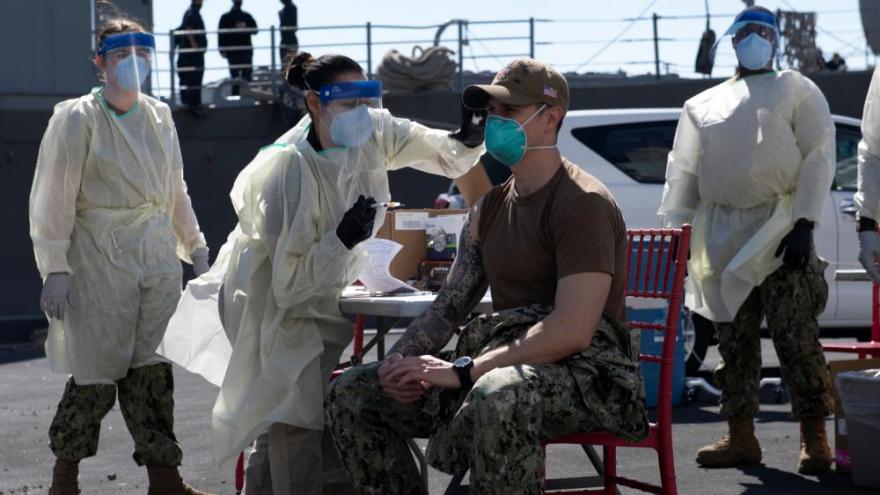 A United States Navy officer from the amphibious ship USS San Diego receives a Covid-19 vaccine at the Navy port in Manama, Bahrain, on February 26.

(CNN) -- A federal judge in Texas on Monday ruled against the Biden administration's vaccine requirement for members of the military in a decision that took aim at how the Navy's policies handled those who sought religious exemptions from receiving the Covid-19 vaccine.

US District Judge Reed O'Connor issued a preliminary order blocking the Navy from taking adverse action against 35 Navy Seals who sued in court because they are seeking exemption from the vaccine requirement for religious reasons. The order blocked the Navy from implementing policies that would allow those religious objectors to be deemed non-deployable or disqualified from Special Operations.

"The Navy servicemembers in this case seek to vindicate the very freedoms they have sacrificed so much to protect," O'Connor wrote in his order. "The COVID-19 pandemic provides the government no license to abrogate those freedoms. There is no COVID-19 exception to the First Amendment. There is no military exclusion from our Constitution."

The case was brought by Navy Seals who accused the Navy of having "disdain for religious vaccine accommodations," in contrast to "certain secular vaccine exemptions" -- like exemptions for medical reasons -- that had been granted. The challengers alleged that, upon expressing their religious objections to receiving the vaccine, they were informed that they could suffer adverse consequences for their refusal, including disqualification from Special Operations and deployment.

According to court filings in the case, over 99% of active-duty Navy service members are fully vaccinated against Covid-19.

The lawsuit alleged that the Navy's handling of their religious objections violated the Free Exercise of Religion Clause of the Constitution, as well as the Religious Freedom Restoration Act, a law that sets a high standard for when the government can burden an individual's religious freedom, and an administrative law that sets out the procedure for rolling out agency policy.

O'Connor said that the challengers were likely to succeed on their constitutional and RFRA claims.

The Defense Department's vaccine rules have been targeted by other lawsuits, but, before Monday's ruling, none of those lawsuits had been successful in securing preliminary orders loosening the requirements.

The Supreme Court is also considering challenges to the Biden administration's vaccine policies for large employers and for certain health care workers, but religious freedom is not a central claim in either of those cases.

The lawsuit before O'Connor had attracted the support of several Republican members of Congress who filed a friend-of-the-court brief in favor of the Navy Seals challenging the mandate.