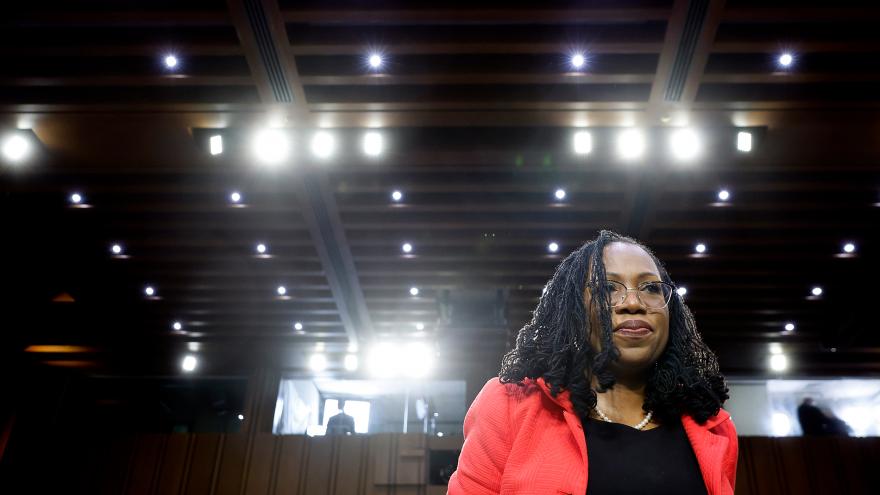 (CNN) -- Over the span of 330 pages, Judge Ketanji Brown Jackson responded to -- and at times, dodged -- hundreds of written questions from Republican members of the Senate Judiciary Committee, as she enters the final stretch of her Supreme Court confirmation process.

Jackson's responses to the questions -- which were put to her in writing after her marathon session of live Senate testimony last week -- were posted Friday, ahead of Monday's scheduled committee vote to advance her nomination.

To explain why she didn't answer during the hearing Louisiana Sen. John Kennedy's question about when certain constitutional protections begin to cover an "unborn child," Jackson quoted Barrett in her written responses: "I will apply the law fully and faithfully. I will not impose my religious convictions or personal beliefs on anyone."

Elsewhere, Jackson invoked the late Justice Antonin Scalia, a legal lodestar for Republicans, to ground her approach to the law.

Asked by Iowa Sen. Chuck Grassley about the language she used in one prominent case as a district court judge where she declared that "Presidents are not kings" as she ruled against the Trump administration, Jackson pointed to Scalia to defend her rhetorical style.

"Clear writing is key to a transparent judiciary and public confidence in courts. I therefore have at times used imagery, allegories, or metaphors to explain complicated legal arguments," she wrote. "This is consistent with the practices of many other judges and justices, including Justice Antonin Scalia."

The responses posted Friday did not include any questions from committee Democrats. The 240 written questions that Texas Sen. Ted Cruz posed for the judge also came with six paragraphs of instructions for how she should approach answering his inquiries; his directive that she not cross-reference answers provided in other questions was ignored.

Several of the Republicans' questions asked her to dissect rulings she issued. Other responses tread back over ground covered in her hearings about her judicial approach and her views on precedent.

Some senators asked her to weigh in on media reports about her nomination process, inquiring about the PR professionals she enlisted while she was being considered for the vacancy (Jackson said she didn't hire anyone, but that consultant helped her friends manage press requests) and about the former clerk who edited the Wikipedia pages of the other contenders for the seat (she said that she was unaware the ex-clerk was making those edits before it was reported.).

Several more questions hit the culture war beats that Republicans have emphasized as they've sought to shape her nomination fight around the issues they think will resonate in the midterms. She faced a half-dozen questions about critical race theory.

"Academic theories have played no role in my judicial decision-making," she said in response to one such inquiry, from Arkansas Sen. Tom Cotton.

Multiple written questions revisited her refusal during her live testimony to provide Tennessee Sen. Marsha Blackburn with a definition of a "woman."

"I am aware that the reason these questions are being posed to me is because there are active conversations happening in the public sphere -- among policymakers and others -- regarding LGBTQ individuals, especially transgender individuals, and their participation in various activities," Jackson wrote in her written response, while noting that previous Supreme Court nominees were not asked such questions. "This is precisely why I, as a federal judge and as a nominee, must decline to answer these questions."

She added, however, that she was "pleased to be the sixth woman nominated to serve on the Supreme Court."