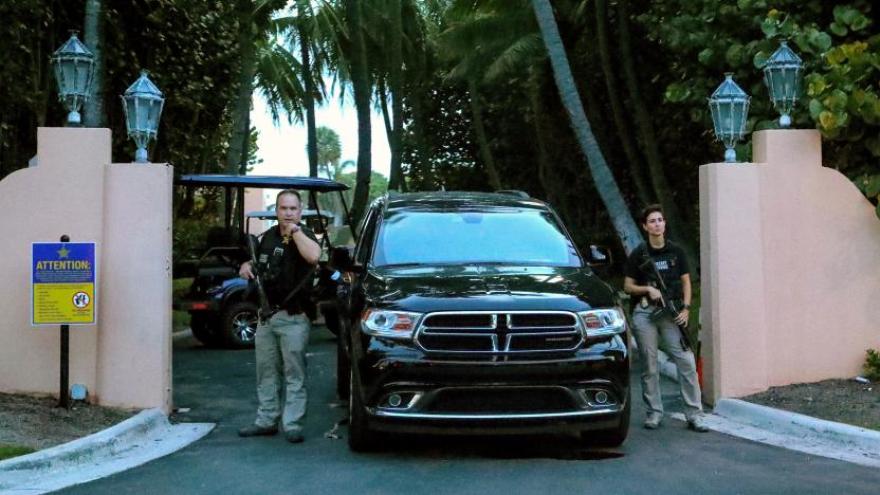 Secret Service agents stand at the gate of Mar-a-Lago after the FBI issued warrants at the Palm Beach, Fla., estate, Monday, Aug. 8. A federal judge scheduled a hearing to consider former President Donald Trump's request for a "special master" to oversee the FBI's review of evidence seized at Mar-a-Lago.

(CNN) -- A federal judge scheduled a hearing for Thursday to consider former President Donald Trump's request for a "special master" to oversee the FBI's review of evidence seized at Mar-a-Lago.

In doing so, the court put the parties on notice that she had a "preliminary intent" to appoint the special master, a third-party attorney who would filter out privileged material seized in the search.

Ahead of the hearing, the government faces a Tuesday deadline to respond to Trump's request in writing, according to the scheduling order from the court.

US District Judge Aileen Cannon, who was nominated to the bench by Trump in 2020, is asking the Department of Justice to file a public response, and additionally file under seal records going into greater detail about what was seized from the search as well as a notice laying out the status of the review of the seized materials, including the process of filtering out privileged information.

Trump's reply to DOJ's response is due Wednesday.

The hearing will be at 1 p.m. ET Thursday at the courthouse in West Palm Beach.

Cannon said at the end of the order that it should not be construed as her final decision on the matter.

On Friday, Trump responded to Cannon's request that he elaborate on his request for the special master by pointing to some additional legal discussion of case law that he said supported his request.

Trump's Friday submission came hours after the Justice Department unsealed a redacted version of the affidavit it used to obtain the warrant, which laid out new details about the FBI's investigation and the highly sensitive nature of classified material that had been previously retrieved from the Palm Beach, Florida, resort.

Trump claimed that the newly released redacted affidavit the FBI submitted in court to obtain the warrant for the search raised "more questions than answers."

"The Redacted Affidavit underscores why this Motion should be granted, as it provides almost no information that would allow Movant to understand why the raid took place, or what was taken from his home," Trump's wrote on the filing.