Just like Wilson, Rodgers had rough first year with Hackett 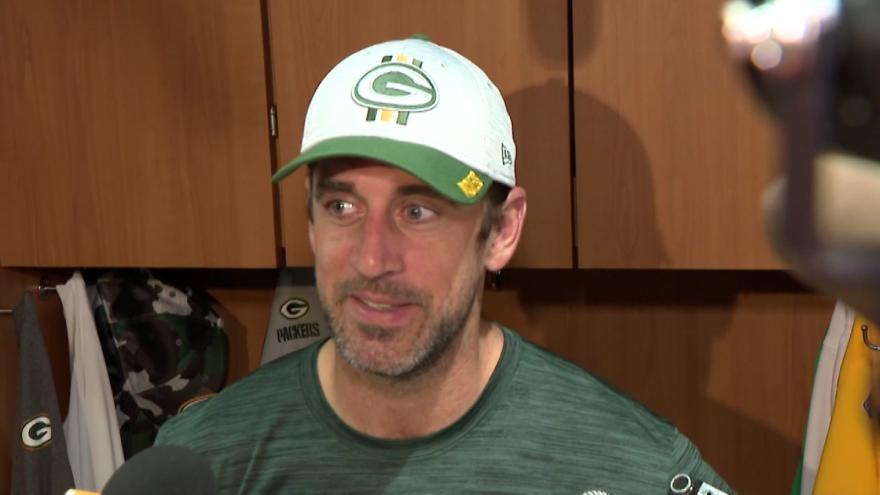 ENGLEWOOD, Colo. (AP) — If it's any consolation to Russell Wilson, Aaron Rodgers also had a rough first season under Nathaniel Hackett's tutelage.

"It's tough when you've been in a different style of offense, for sure," said Rodgers, who had nine games with either zero or one touchdown pass for the Green Bay Packers in 2019 when Hackett was his offensive coordinator.

Rodgers followed that up with back-to-back MVP seasons that burnished Hackett's credentials and helped him land his first head coaching gig in Denver.

The Hackett-Wilson marriage is off to a rocky start in the Rockies.

The Broncos (2-3) are averaging a mere 14.6 points on offense, Wilson has just four TD passes and is 2 for 18 on throws into the end zone. His receivers have dropped 10 passes. And Hackett had to hire someone to help him manage the games.

"Hack's my boy. I love him," Rodgers said. "I'm not sure exactly what he's running. When he was here, we were running Matt (LaFleur)'s system. This is the (Mike) Shanahan system down through to all the different iterations of various coaches who are now head coaches running the system.

"Nate's been around a lot of different systems. He grew up around the West Coast offense, so I'm sure it's a blend of West Coast concepts, Shanahan concepts, stuff he did in Buffalo and Jacksonville," Rodgers said. "It's always tough when you're changing the verbiage. We had kind of an up-and-down year the first year and then really took off the second year."

The Broncos (2-3), who face the Chargers (3-2) on Monday night in their fourth prime-time game of this young season, sure hope it won't take that long for Wilson to start thriving in Hackett's hybrid West Coast system.

They're hopeful he can follow in the footsteps of Peyton Manning in 2012, Tom Brady in 2020 and Matthew Stafford last year and lead them on a mid-season turnaround in his first season with his new team.

Left guard Dalton Risner, who missed practice Thursday with a back injury, said earlier in the week that the locker room has Wilson's back despite the early struggles.

Hackett said the offensive hiccups are "more of growing pains right now," so he doesn't intend to make wholesale changes, and Wilson isn't planning to, either.

"I've been doing it for 10 years at a high level. I trust my process, trust how I prepare," Wilson said. "I can't get here any earlier. I wouldn't have a bed to sleep on at home."

Wilson compared all the challenges of switching teams midcareer to building a puzzle.

"To me, there's not necessarily challenging parts, I think it's just new parts," he said. "It's new newness and it's figuring out all the little pieces of the puzzle. You're trying to build a map; you're a puzzle maker. You're trying to put everything, all the pieces, together. And sometimes you have to search for that one puzzle piece to finish.

"We're putting all those puzzle pieces together."

Wilson hasn't blamed a strained muscle near his throwing shoulder for any of his troubles, although he did receive an injection last Friday to relieve the discomfort.

"It's getting better and better every day," Wilson said before practice Thursday, adding that although it's not an injury he's had before, "I'll be OK. I'll be ready" to face the Chargers.

NOTES: Risner (back) missed practice, throwing another wrench into Denver's O-line, which lost LT Garett Bolles (ankle) for the year. Calvin Anderson filled in after Bolles got hurt last week, but the Broncos could put Billy Turner (knee) there and either move Anderson to the right side or leave Cam Fleming at right tackle. Turner has yet to make his 2022 debut after offseason knee surgery.