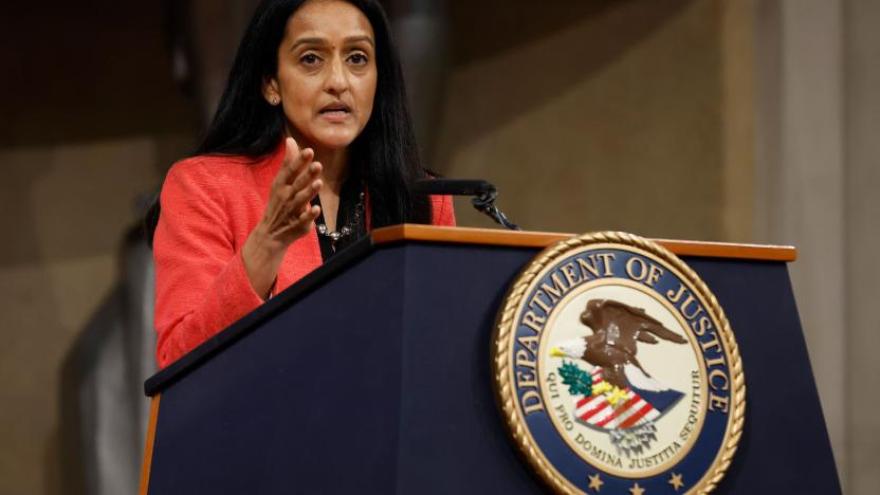 US Associate Attorney General Vanita Gupta delivers remarks at the Department of Justice Robert F. Kennedy Building on May 20, in Washington, DC. The Justice Department announced a task force on July 12 aimed at identifying ways to protect reproductive rights in the wake of the Supreme Court decision that struck down the federal right to abortion.

(CNN) -- The Justice Department on Tuesday announced a task force aimed at identifying ways to protect reproductive rights in the wake of the Supreme Court decision that struck down the federal right to abortion.

Called the Reproductive Rights Task Force and chaired by Associate Attorney General Vanita Gupta, the group will "monitor and evaluate" state and local legislation and enforcement that might infringe on a person's ability to seek reproductive care, ban abortion-inducing drugs or impose criminal or civil consequences on federal employees who provide reproductive health services that are legal under federal law.

"The Court abandoned 50 years of precedent and took away the constitutional right to abortion, preventing women all over the country from being able to make critical decisions about our bodies, our health, and our futures. The Justice Department is committed to protecting access to reproductive services," Gupta said in a statement.

The announcement comes after Biden signed an executive order Friday aimed at protecting abortion rights and called on the the Justice Department, "much like they did in the civil rights era, to do something, to do everything in their power to protect these women seeking to invoke their rights." The DOJ announcement formalizes existing efforts by the department to support access to reproductive health care.

The Biden administration has worked across multiple federal agencies to respond to the Roe v. Wade reversal -- the Department of Health and Human Services, for example, issued guidance Monday clarifying a health care provider's duty and protections when providing abortion care for life/health-saving measures. But the White House has so far dismissed several progressive ideas to protect abortion access, including using federal lands for abortion services and expanding the Supreme Court.

Biden's executive order attempts to safeguard access to medication abortion and emergency contraception, protect patient privacy, launch public education efforts as well as bolster the security of and the legal options available to those seeking and providing abortion services.

Still, there is no action the President can take to restore the nationwide right to an abortion in the wake of the high court's ruling, and Biden has acknowledged publicly his options to expand abortion access remain limited.

As Democrats and advocates pressure the White House to take a stronger stance to codify abortion access, Biden recently said he would support making an exception to the filibuster -- the 60-vote threshold in the Senate needed to pass most legislation -- in order to codify abortion rights, a position he had previously been reluctant to support.