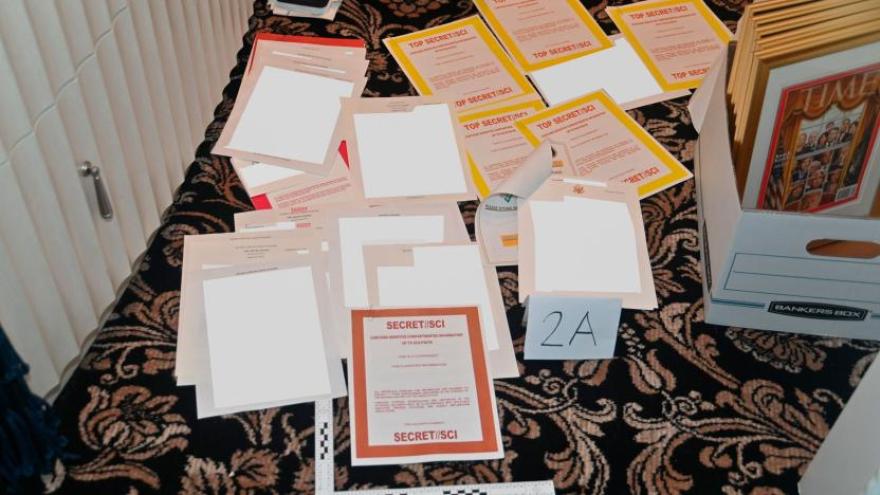 Seen here are the documents seized during the August 8 search by the FBI of former President Donald Trump's Mar-a-Lago estate. The Justice Department asked an appeals court on September 16 to intervene in the fight surrounding the classified documents.

(CNN) -- The Justice Department on Friday asked an appeals court to put on hold parts of a judge's order requiring a third-party review of the materials seized last month at former President Donald Trump's Mar-a-Lago residence.

In its request with the 11th US Circuit Court of Appeals, the Justice Department said the lower court's move to block criminal investigations from reviewing the seized documents marked as classified would cause irreparable harm, writing that the "criminal investigation is itself essential to the government's effort to identify and mitigate potential national-security risks."

Trump's team has until noon ET Tuesday to respond to the DOJ's request, the court said on Saturday.

The department sought the intervention after District Judge Aileen Cannon on Thursday rejected prosecutors' request that they be allowed to restart their criminal investigation into the classified documents.

"The court's order hamstrings that investigation and places the FBI and Department of Justice (DOJ) under a Damoclean threat of contempt should the court later disagree with how investigators disaggregated their previously integrated criminal-investigative and national-security activities," the Justice Department wrote.

The Justice Department is also asking the appeals court to exclude the documents marked as classified from the so-called special master review Cannon has ordered. Noting that Cannon's order would require those documents be provided to Trump's lawyers, the prosecutors said there was "no basis for disclosing such sensitive information," and that the order required them to make "disclosure of highly sensitive material to a special master and to Plaintiff's counsel—potentially including witnesses to relevant events—in the midst of an investigation, where no charges have been brought."

The Justice Department on Friday asked for the 11th Circuit to take action "as soon as practicable."

The new filing with the 11th Circuit fast-tracks the dispute over the Mar-a-Lago search up to the appeals court and raises the possibility that the US Supreme Court will be asked to weigh in as well in the coming weeks.

The Justice Department originally sought the warrant to search Mar-a-Lago after months of negotiations with Trump's team over documents that were brought from his White House to the Florida resort after he left office. The FBI is investigating at least three potential crimes in its probe: violations of the Espionage Act, illegal handling of government records and obstruction of justice.

In her Thursday night order rejecting the Justice Department's bid to resume its criminal investigation, Cannon cast doubt that the 100 or more documents in question were actually classified, concluding that the question was in dispute and one best reviewed by an independent party.

She also blew off Justice Department arguments that the hold she had put on its criminal probe was putting national security at risk. That approach is at odds with the deference courts normally show to government assertions about classification and national security.

In their request to the 11th Circuit, the prosecutors said that the lower court had disregarded the evidence they had put forward about the risks posed by how the government records were bring stored.

The record, they said Friday, "makes clear that the materials were stored in an unsecure manner over a prolonged period, and the court's injunction itself prevents the government from even beginning to take necessary steps to determine whether improper disclosures might have occurred or may still occur."

The prohibitions on the criminal investigation, the prosecutors said, was undercutting the intelligence community assessment's ability to "evaluate the harm that would result from disclosure of the seized records."

"The court's injunction restricts the FBI—which has lead responsibility for investigating such matters in the United States—from using the seized records in its criminal-investigative tools to assess which if any records were in fact disclosed, to whom, and in what circumstances," the Justice Department told the appeals court.

Cannon also concluded that the classification designations were in doubt without the Trump team putting forward the type of evidence -- such as declarations -- that would suggest the materials weren't in fact classified. Trump has claimed in media appearances he declassified the documents he took to Mar-a-Lago, but his lawyers have yet to make that assertion in court filings.

Cannon has repeatedly acknowledged in court decisions that her rationale is based in part on Trump's status as a former president, writing Thursday that the "principles of equity" required her "to consider the specific context at issue, and that consideration is inherently impacted by the position formerly held by Plaintiff."

In their appeal to the 11th Circuit, the Justice Department wrote that none of the 100 documents marked as classified could possibly be Trump's personal records -- a type of claim he's trying to make to keep some of the documents out of the evidence.

"None of those rationales applies to the records bearing classification markings: The markings establish on the face of the documents that they are not [Trump]'s personal property," the department writes.

The case now lands before a circuit court where six of the 11 active judges are Trump-appointees. It will go to a panel of three randomly selected judges from the court. A panel that includes some of the appellate judges picked by the former President could still be sympathetic to the Justice Department, given the deference the government is usually given when it says national security is at risk.

There is also skepticism among outside legal observers about Cannon's decision to intervene in the first place, given that a separate magistrate judge in Florida approved the warrant for the search and the investigation itself is being run out of a grand jury in DC.

Cannon -- a 2020 appointee of then-President Trump -- was randomly assigned the lawsuit that Trump filed two weeks after the FBI executed the search warrant.

The Justice Department argued that Trump's attempts to assert privileges are weak -- if he's even made them at all.

"Neither [Trump] nor the court has suggested that they might be subject to attorney-client privilege. [Trump] has never even attempted to make or substantiate any assertion of executive privilege. Even if he did, no such assertion could justify restricting the Executive Branch's review and use of these records for multiple independent reasons."

The Justice Department also takes issue with both Trump going to court to try to block investigators from being able to access classified records seized from Mar-a-Lago and with Cannon stepping in.

Trump "lacks standing at least as to the discrete set of records with classification markings because those records are government property, over which the Executive Branch has exclusive control and in which Plaintiff has no property interest," the DOJ writes.

The government attorneys say that the courts can only get involved in exceptional circumstances, such as when constitutional rights are disregarded in a search or when a search subject has a special need to keep seized material, and that "cannot extend to these records."

"The district court reasoned that other materials in which Plaintiff [Trump] might have a cognizable interest cannot readily be separated from those in which he does not. But that rationale is inapplicable to records with classification markings, which are easily identifiable and already segregated from the other seized materials," the department writes.