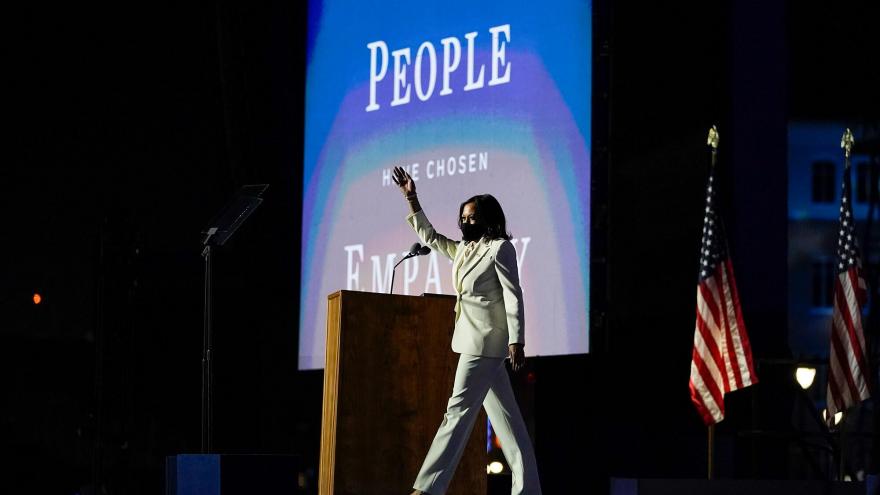 Vice President-elect Kamala Harris, seen here in 2020, will officially resign on Jan. 18 from her US Senate seat.

Aides say Harris has already started the process of her resignation, having notified California Gov. Gavin Newsom of her intent and sent her formal indications that she'll be resigning Monday. Harris will not give a farewell speech on the Senate floor, due to the schedule.

Harris won her seat in November 2016 and was sworn in January 2017. At the time, Harris was California's attorney general.

Newsom has already named Alex Padilla, California's secretary of state, to fill Harris' seat. In a press call, he told reporters he would likely be sworn in himself on Wednesday.

The incoming vice president has spoken to Padilla before he comes into office, according to a person with knowledge of the discussion.

Harris made history throughout her career, becoming the first Black woman in California to serve as a senator.

In her November victory speech, she recognized the hard battle women faced to exercise their civic rights and break into the upper echelon of American politics, nodding to the women who came before her like former Rep. Shirley Chisholm and the young girls who will come after her.

"While I may be the first woman in this office, I will not be the last," Harris said. "Because every little girl watching tonight sees that this is a country of possibilities."

Now, Harris will preside over the same chamber that she is stepping down from, becoming president of the Senate.

With the double Democratic victories in two Georgia Senate runoffs and a highly polarized Congress, Harris will have the power to push any legislation, judicial appointments and Cabinet nominations languishing on party lines over the threshold and take credit for helping pass the administration's priorities. As president of the Senate, she will cast the tie-breaking vote.

But Harris aides say they hope Harris won't have to break many ties.

"We believe that the issues that the Congress will have to take up are bipartisan issues that are of importance to the American people," one aide said.

President-elect Joe Biden rolled out his first legislative priority this week, announcing a $1.9 trillion coronavirus relief package that included direct payments to Americans. Biden has emphasized he wants it to be the first issue Congress takes up after he is inaugurated on January 20.

In a press call with reporters announcing the resignation, Harris aides pointed to the first time she worked on Capitol Hill in 1984. She interned for California Sen. Alan Cranston during her sophomore year of college at Howard University, a historically Black university.

"I loved going to work—it felt like the epicenter of change, even as an intern sorting mail," Harris wrote in a tweet from her Senate account in January of last year. "I now work in the exact Senate office where I once interned."

Aides on the call outlined what they viewed as Harris' legislative victories, including the introduction of her Maternal CARE Act, the first bill in the Senate to specifically address racial disparities in maternal mortality, according a fact sheet, as well as several bipartisan efforts like the anti-lynching act cosponsored by Democratic Sen. Cory Booker of New Jersey and Republican Sen. Tim Scott of South Carolina, along with her election security bill with Republican Sen. James Lankford of Oklahoma.

On Wednesday, Harris will be sworn in by Supreme Court Justice Sonia Sotomayor, according to a Harris aide. The vice president-elect will take her oath of office using two Bibles; one that previously belong to a former neighbor and family friend of Harris, Regina Shelton, and another that belonged to Thurgood Marshall, the first African American to serve on the Supreme Court, the aide said.

When asked about who she will be thinking of, Harris has repeatedly said her late mother Shyamala Gopalan.

"I will be thinking about my mother, who is looking down from heaven," Harris told NPR this month.