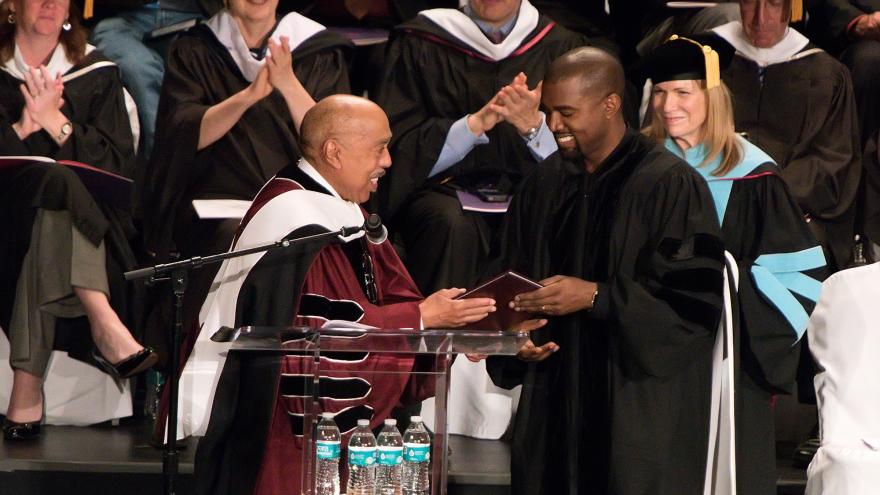 (CNN) -- The School of the Art Institute of Chicago (SAIC) has revoked an honorary doctorate awarded to Kanye West, as the fallout from the rapper's offensive remarks about Black and Jewish people continues.

The prestigious art college announced the decision on Thursday, saying in a statement that "the School of the Art Institute of Chicago condemns and repudiates Kanye West's (now know as Ye) anti-Black, antisemitic, racist, and dangerous statements, particularly those directed at Black and Jewish communities.

"Ye's actions do not align with SAIC's mission and values, and we've rescinded his honorary degree," it added.

The 45-year-old star was awarded the honorary doctorate in 2015, in recognition of his contributions to art and culture. Following his controversial actions, a group called Against Hate at SAIC launched a Change.org petition calling for the award to be rescinded, saying it would be harmful to allow it to stand.

"Regardless of his contribution prior to the receipt of this award, it is harmful to allow Ye, as he is presently known, to continue to use the School of the Art Institute of Chicago to help legitimize hatred and violence," the petition read in part.

"This harm impacts the artists, designers and scholars affiliated to the School of the Art Institute of Chicago and their values of justice, compassion, and free expression without hatred."

According to an update shared on the petition page Thursday, SAIC President Elissa Tenny wrote in a letter that West's remarks are "disgusting and condemnable" and have been "painful for our entire community."

"This was a difficult decision to make, and one that has been deliberated thoroughly," Tenny wrote, adding that this marks the first time in the school's 80-year history that a degree has been revoked.

The rescinding of the honorary degree comes weeks after a mural celebrating West was painted over in Chicago's West Loop neighborhood.

He also recently lost lucrative deals with brands including Balenciaga, Adidas and Gap. His Twitter account was suspended after he shared an image of a Star of David with a swastika inside.