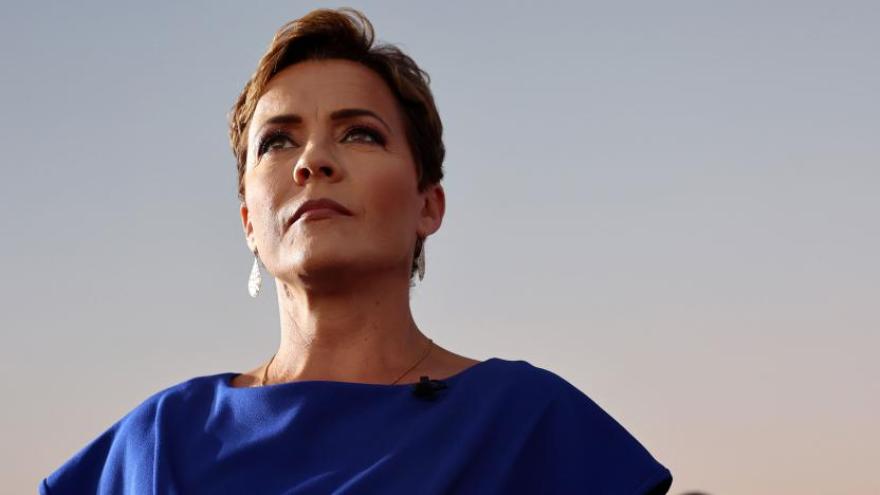 Arizona Republican gubernatorial nominee Kari Lake takes part in a campaign rally in Mesa on October 9. An envelope containing "suspicious white powder" was received November 5 at the campaign headquarters of the Republican nominee for governor in Arizona.

(CNN) -- An envelope containing "suspicious white powder" was received Saturday at the campaign headquarters of the Republican nominee for governor in Arizona.

Earlier Sunday, Lake campaign spokesman Colton Duncan told CNN via text message that two envelopes were confiscated by law enforcement and were "sent to professionals at Quantico for examination."

Lake told reporters Sunday evening that her campaign was initially told the suspicious mail was being sent to Quantico for examination, "but apparently there's a closer lab and that's where they actually sent the substance, so we're going to find out what it was."

Phoenix police told CNN in an email they responded to a "property call" by 40th Street and Camelback Road.

"When officers arrived, they learned there were suspicious items located inside the mail. Additional resources responded to collect the items and secure the area," Sgt. Phil Krynsky told CNN. "There have been no reports of injury and the investigation remains active."

CNN has reached out to the FBI's Phoenix office for more information.

Earlier Sunday, Lake's team said it was taking the "threat incredibly seriously" and thanked the authorities for looking into the incident. Duncan said the staff member was under medical supervision.

"In the meantime, know that our resolve has never been higher, and we cannot be intimidated. We continue to push full speed ahead to win this election on Tuesday," Duncan said.

Arizona has been a hot bed of extremist anger and threats against political and election officials. Those threats have been leveled against both Democratic and Republican leaders.

"We're in dangerous times. This is not the first time we've been... threatened, I've been threatened many times," Lake told reporters at a campaign event in Queen Creek.

"We'll get to the bottom of this, I really don't want to get too far ahead of it, I want investigators to look into it and I truly want to find the people who sent this because it's wrong that this is happening."

Lake's Democratic opponent, current Arizona Secretary of State Katie Hobbs, condemned the behavior directed at her opponent and her staff, saying the incident was "incredibly concerning."

"Political violence, threats, or intimidation have no place in our democracy," Hobbs said in a statement. "I strongly condemn this threatening behavior directed at Lake and her staff."

Hobbs' campaign office was broken into late last month. A suspect has been arrested in that case, but police said the man had broken into at least one other office recently. Police did not connect the suspect to any political motivation.

"There is no place in our democracy for stuff like that," Kelly told CNN at a campaign event in Tucson. "But we don't need to, anybody needs to be doing anything like that. It's just wrong. And hopefully there'll be an investigation and they'll find who did it and they'll arrest them and prosecute him."