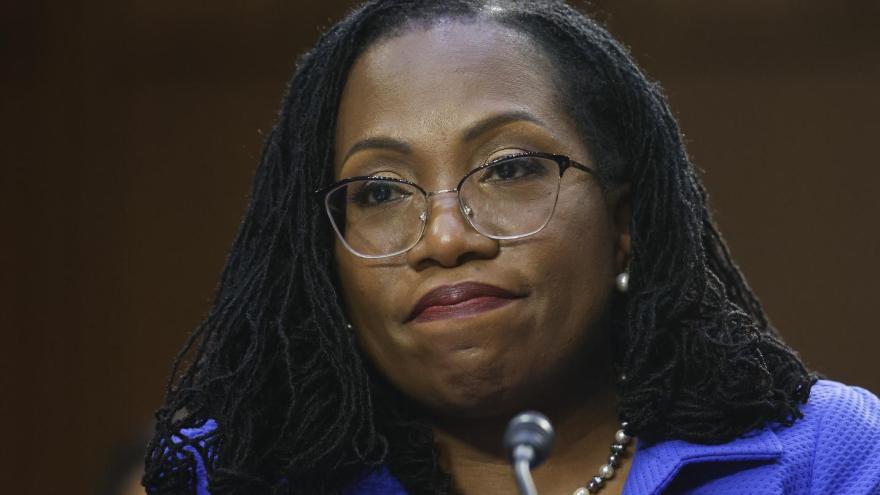 Ketanji Brown Jackson, in her first written opinion as a Supreme Court justice, said she would have sided with an inmate who argued that Ohio suppressed evidence that might have helped him at trial. Brown Jackson is seen here in Washington, DC, on March 23.

(CNN) -- Ketanji Brown Jackson, in her first written opinion as a Supreme Court justice, said she would have sided with an inmate who argued that Ohio suppressed evidence that might have helped him at trial.

The full court declined to take up appeal brought by Davel Chinn, who shot and killed a man named Brian Jones as a part of an attempted robbery.

Chinn was sentenced to death after another man, an accomplice named Marvin Washington, identified him for police.

But after his conviction, Chinn argued that the state had violated a 1963 case called Brady v. Maryland, when it failed to disclose Washington's juvenile records that indicated Washington had a "moderate range" of intellectual disability. He said that the state's entire case hinged on Washington's testimony and that his credibility was in question.

Chinn said the state's failure to disclose the records prejudiced him because he may have been able to cast doubt on Washington's ability to identify him as the killer, testify accurately and remember key dates.

Lower courts ruled against Chinn, holding that the failure to overturn evidence only violates Brady if the information is "material" and only if there is a reasonable probability that -- had the records been disclosed -- the result at trial would have been different. The courts said that Chinn had failed to meet that standard.

The court on Monday said it's not taking up Chinn's appeal. Jackson wrote her first written opinion -- a dissent -- saying that there was "no dispute" that the state had "suppressed exculpatory evidence" and questioned how the lower courts had applied the so called "materiality standard."

She said that to prove a violation of Brady, a defendant has a "low burden" to show the "reasonable probability" of a different outcome.

"Because Chinn's life is on the line, and given the substantial likelihood that the suppressed records would have changed the outcome at trial," Jackson wrote, she would have summarily reversed the lower court. She was joined only by Justice Sonia Sotomayor.

In a separate case before the Supreme Court on Monday, the two liberal justices also dissented together, saying they would have taken up an appeal from a Louisiana man who says he was denied the right to a fair trial when prosecutors called the assistant district attorney -- who presented the case to the grand jury -- to the witness stand.

Jackson's written dissent comes months after she cast her first vote as a justice back in July. In that case, she joined Justices Elena Kagan, Amy Coney Barrett and Sotomayor in dissenting from the court's decision to freeze a lower court order that blocked the Department of Homeland Security from implementing new immigration enforcement priorities.

Jackson, the first African American woman to serve on the high court, was sworn in on June 30.