Keystone Pipeline shuts down after oil leak, halting flow of 600,000 barrels a day 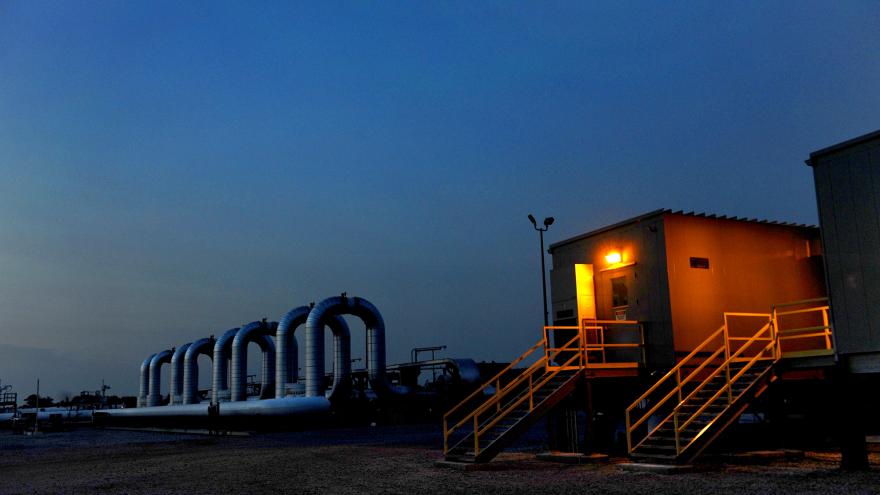 (CNN) -- The Keystone Pipeline has been shut down following a leak discovered near the border of Kansas and Nebraska.

The shutdown of the major oil pipeline that carries crude from Canada triggered volatility in the energy market on Thursday, with oil prices briefly surging as much as 5% before retreating.

Federal safety regulators are investigating the leak and have deployed to the site, a spokesperson for the Pipeline and Hazardous Materials Safety Administration told CNN.

Canada's TC Energy said it launched an emergency shutdown of the Keystone Pipeline System at 9 p.m. ET on Wednesday after alarms were triggered and pressure dropped in the system. The company said the system remains shut as "our crews actively respond and work to contain and recover the oil."

Calgary-based TC Energy said there has been a "confirmed release of oil" into a creek located about 20 miles south of Steele City, Nebraska.

It's not clear how much oil has leaked.

The PHMSA, an arm of the Transportation Department charged with enforcing safety regulations for pipelines, said the leak is located near Washington, Kansas, which is near the border with Nebraska.

The spokesperson said the agency continues to investigate the cause of the leak.

US oil prices climbed as high as $75.44 a barrel on the news, before easing. In recent trading, oil was up 0.8% to $72.57 a barrel. The gains follow a steep selloff in recent days that left crude at levels unseen since December 2021.

No timetable has been given for restarting the Keystone Pipeline, a 2,700-mile system that delivers mostly Canadian oil to major refineries across America. The pipeline can transport more than 600,000 barrels of oil per day.

"We're seeing a pop in prices because this will impact refiners that take this crude," Smith said.

"Our primary focus right now is the health and safety of onsite staff and personnel, the surrounding community, and mitigating risk to the environment through the deployment of booms downstream as we work to contain and prevent further migration of the release," TC Energy said in a statement.

The leak happened on an existing Keystone pipeline that is separate from Keystone XL, a controversial pipeline project that was terminated last year after President Joe Biden revoked the pipeline's permit on his first day in office.

The Keystone Pipeline has experienced leaks in the past, including one in South Dakota in 2016 and another one in 2019 in North Dakota that impacted nearly five acres.