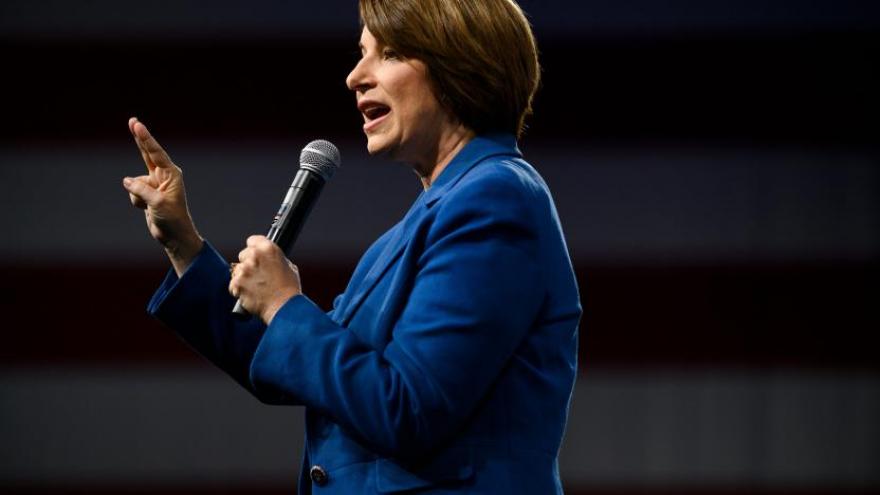 Sen. Amy Klobuchar, seen here on August 10, 2019 in Des Moines, Iowa, says Senate Democrats will do 'everything to get' Build Back Better passed by Christmas.

(CNN) -- Democrats are going to do "everything to get" President Joe Biden's Build Back Better Act done by Christmas, Sen. Amy Klobuchar said Sunday.

"We have to get this done, Jake. And Senator (Joe) Manchin is still at the negotiating table," Klobuchar, a Democrat from Minnesota, told CNN's Jake Tapper on "State of the Union," referring to a moderate member of her party who has voiced some reservations on the proposal.

Pressed by Tapper on whether the bill would be passed by Christmas, Klobuchar said: "I am all in on getting it done by Christmas and we'll do everything to get it done."

As the Senate nears its holiday recess, Democrats, including Klobuchar and Senate Majority Leader Chuck Schumer, are pushing to pass the sweeping spending bill by Christmas. But the party is facing some obstacles from Manchin, whose support of the legislation is key to its passage.

Klobuchar said on Sunday that she is optimistic that Manchin, who represents West Virginia, would eventually support the Build Back Better Act.

Biden said Friday he doesn't know if he can get Manchin on board to support his social safety net bill, but is expected to speak with him about the legislation this week.

The senator indicated that he still had a number of concerns about the legislation -- namely that what he called "budget gimmicks" hide the true cost of the bill, and he's pushing to ensure it costs no more than $1.75 trillion. But he also is seeking to pare down the measure, which passed the House last month, in a number of other areas -- including paid family leave, a methane fee on emissions from energy producers and a Medicare expansion to cover hearing benefits costs. And he's seeking changes to some of the provisions in the tax title of the bill.

Schumer said Thursday that the Senate is "on schedule" to bring the legislation to the floor before Christmas. But getting the bill refined and passed by Christmas remains a heavy lift, given that the process for adjustments to the legislation could easily derail the timeline.